Gov. Mike DeWine criticizes school districts, including Cleveland and Akron, who are not returning to in-person learning by March 1 goal

'This is simply not acceptable.' 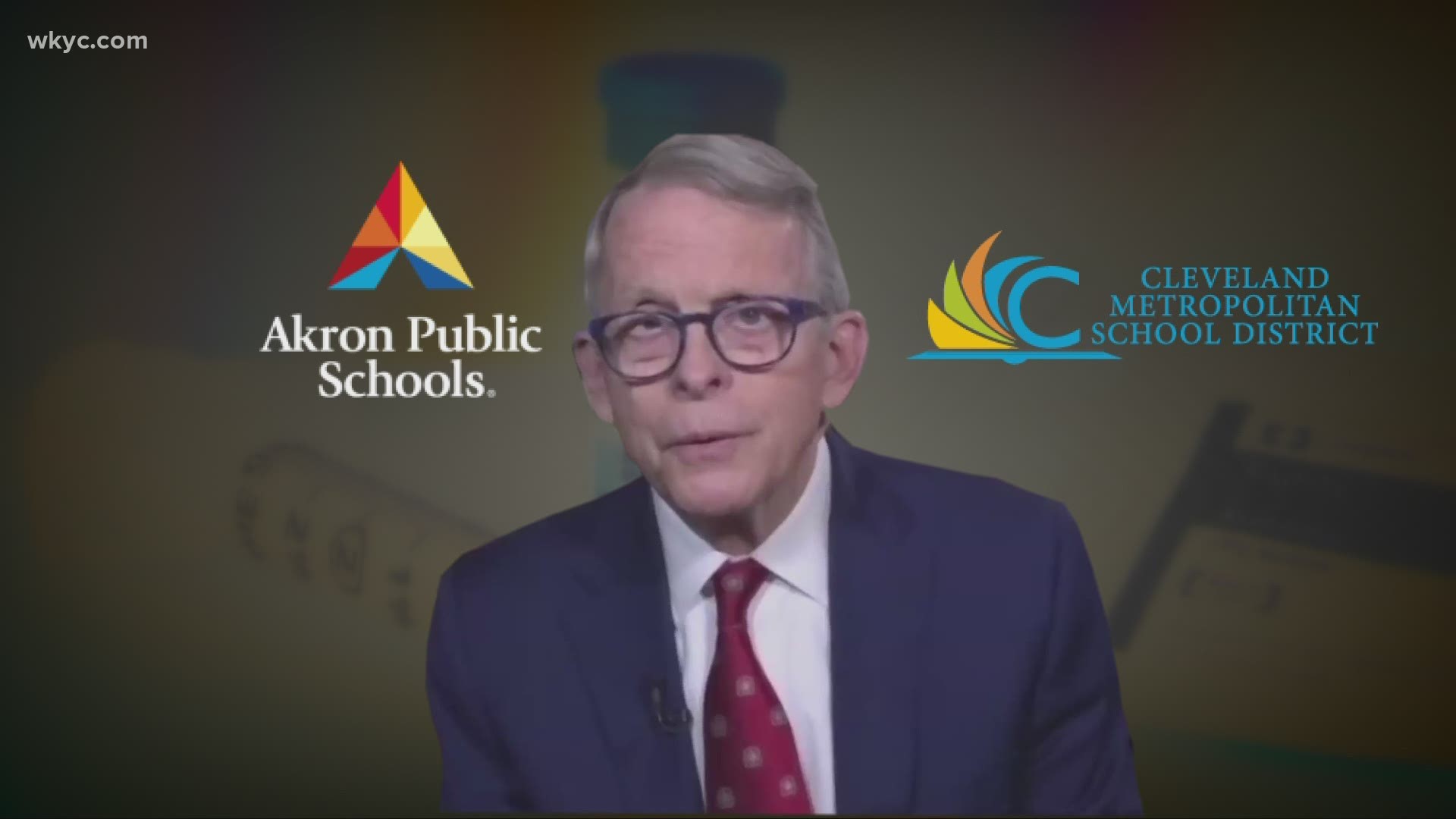 CEDARVILLE, Ohio — In a surprise briefing on Friday evening, Ohio Gov. Mike DeWine called out some of the school districts in the state who are not planning on returning to in-person learning by his March 1 deadline, despite having staff members receive their first dose of the COVID-19 vaccine.

"We said to our school districts that we would take some of the precious vaccine allotted to Ohio and vaccinate teachers and other staff as long as they'd be back in school full-time or in a hybrid model no later than March 1," DeWine began. "We've learned there are a handful of schools that have said they will break that commitment. Not just a commitment to me, but also to the children of their districts. This is simply not acceptable. This is about the kids."

Two of the districts the governor called out were Akron Public Schools and the Cleveland Metropolitan School District.

"Safety has been and always will be our priority for students, employees, and community at large. Akron Public Schools has had better than 2,000 students back in our school buildings since February 1. That is a hybrid model that commenced one month ahead of the governor's schedule. It is our belief that this is in compliance with the commitment made.

"We completely understand the governor's frustration over this situation. This has always been about the kids, as he said. Akron Public Schools has been working for nearly a year with the sole mission of returning children to school AND keeping them and our teachers safe. We have worked closely, and quite well with state and local public health experts."

Akron Public Schools spokesperson Mark Williamson claims the governor's staff on an earlier call said the March 1 deadline was merely a "goal" and "wouldn't be used against people," adding members of the Ohio Department of Education heard the remark. He added the district has vaccinated 2,000 of the 3,000 teachers and staff who requested vaccine.

"By tomorrow afternoon (Saturday), all 3,000 will be covered with first shot. Next will come 2/27 and the following week," he told 3News in an email. Then we wait one week for immunity."

Earlier this week, Gordon told 3News that he didn't expect to make a recommendation on when teachers and students can return to even a hybrid learning system until late this week or early next week. He seemed to indicate that it may not take place until April.

"We will continue to look at the public health data, which is improving in Cuyahoga County, which is exciting news," Gordon said. "I also want to see how this process works this week to make sure we’re on track for vaccines and remembering that our second dose doesn’t happen until mid-March."

The CEO later released this statement to 3News:

"As Governor Mike DeWine shared at a press conference this evening, I spoke directly with the Governor about our continued efforts to open CMSD as quickly as we are able to do so, knowing his expectation for all Ohio districts is March 1.

"At last Tuesday’s Board meeting, I announced my intention to update our students, parents and caregivers, educators, and the entire CMSD community of our reopening plan on next Friday, Feb. 19, and I still plan to do so.

"In the meantime, our preparation to reopen schools has already begun. This morning, we began printing a districtwide mailer that will arrive in all CMSD households the week of Feb. 22 with children’s school and transportation assignments. Additionally, a plan is in place to resume spring sports on Feb. 22, and we have already prepared our school buildings, buses, and classrooms for reopening safely.

"In the meantime, the District made significant progress this week in our effort to vaccinate 7,000 CMSD employees. In the first three days vaccines were available, we vaccinated 2,400 staff.  We expect to have all employees vaccinated with the first of two required doses by next weekend."

DeWine's inital frustration about Cleveland and Akron came out during his briefing on Thursday on the heels of James's "State of the Schools" speech. During his remarks to the Akron Press Club, James announced that his plan for the full return to in-person learning would begin with the district's K-2 students as well as special needs students on March 15th. The remaining students in grades 3-12 will return on March 22nd. Parents can select whether they want their children to remain remote or attend in-person.

DeWine said he's not aware of any other similar situations in the state besides in Cleveland, Akron, and Cincinnati.

The state is in its second week of vaccinating the staff and employees of its schools. Earlier this week, DeWine reported that staff members from 566 schools statewide were given vaccines last week, with the hope that 1300 more schools would have given first doses to employees by the end of this week.

"It's important for our kids to get back in the classroom when their parents are ready to send them back. Kids are falling behind. There are social and mental health consequences. That's why we prioritized vaccines for schools. Otherwise, they'd go to a more vulnerable group," the governor added.

DeWine's briefing came on the same day that the Centers for Disease Control and Prevention released its long-awaited guidance on reopening schools. The 33-page roadmap emphasizes mask wearing and social distancing and says vaccination of teachers is important but not a prerequisite for reopening schools.

You can watch the briefing in the player below: 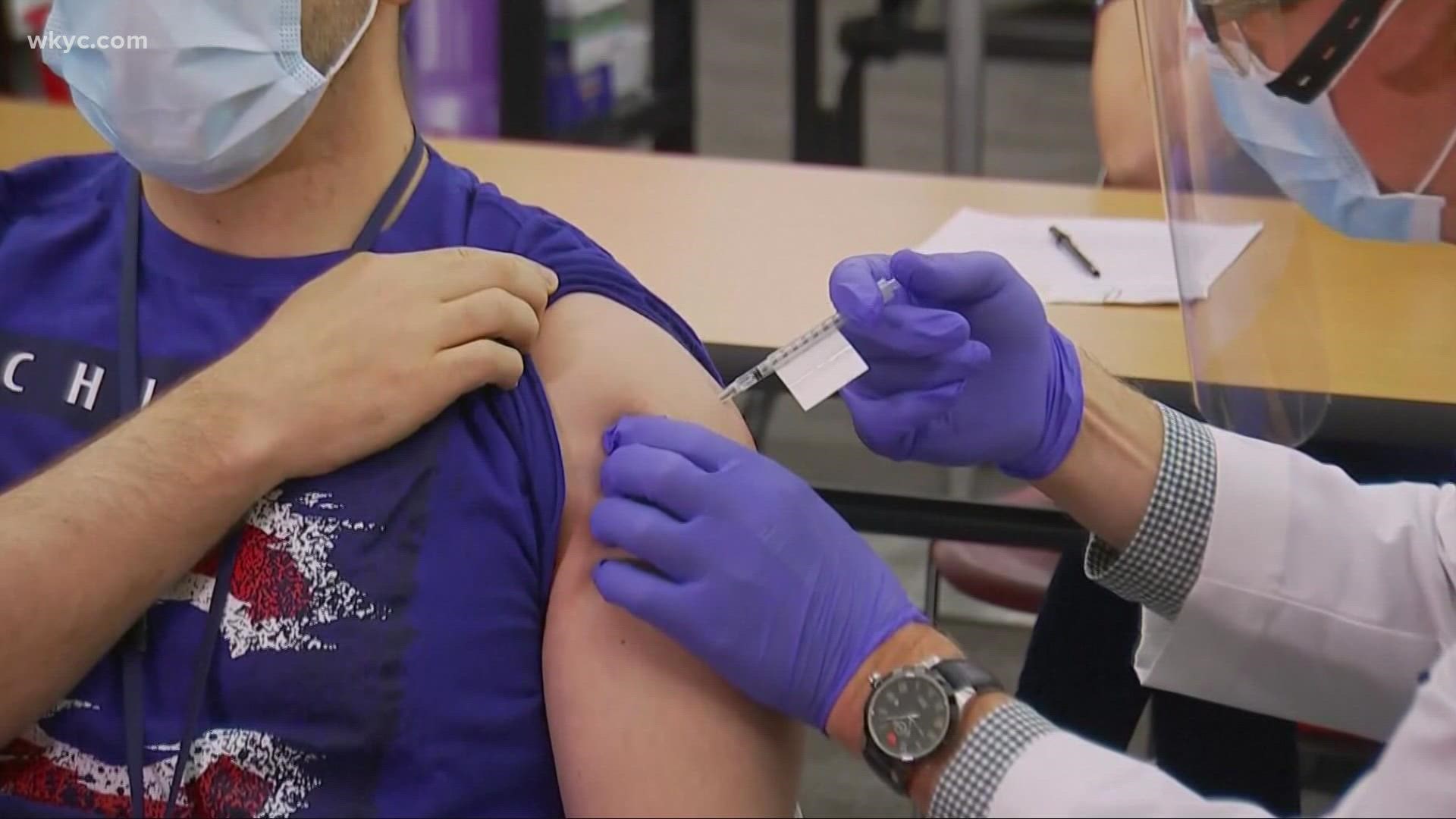 Your Feed at 5: CDC says certain individuals can get 4th COVID shot