Trump hasn't been seen in public, other than in White House videos, since his return days ago from the hospital where he got experimental treatments for COVID-19. 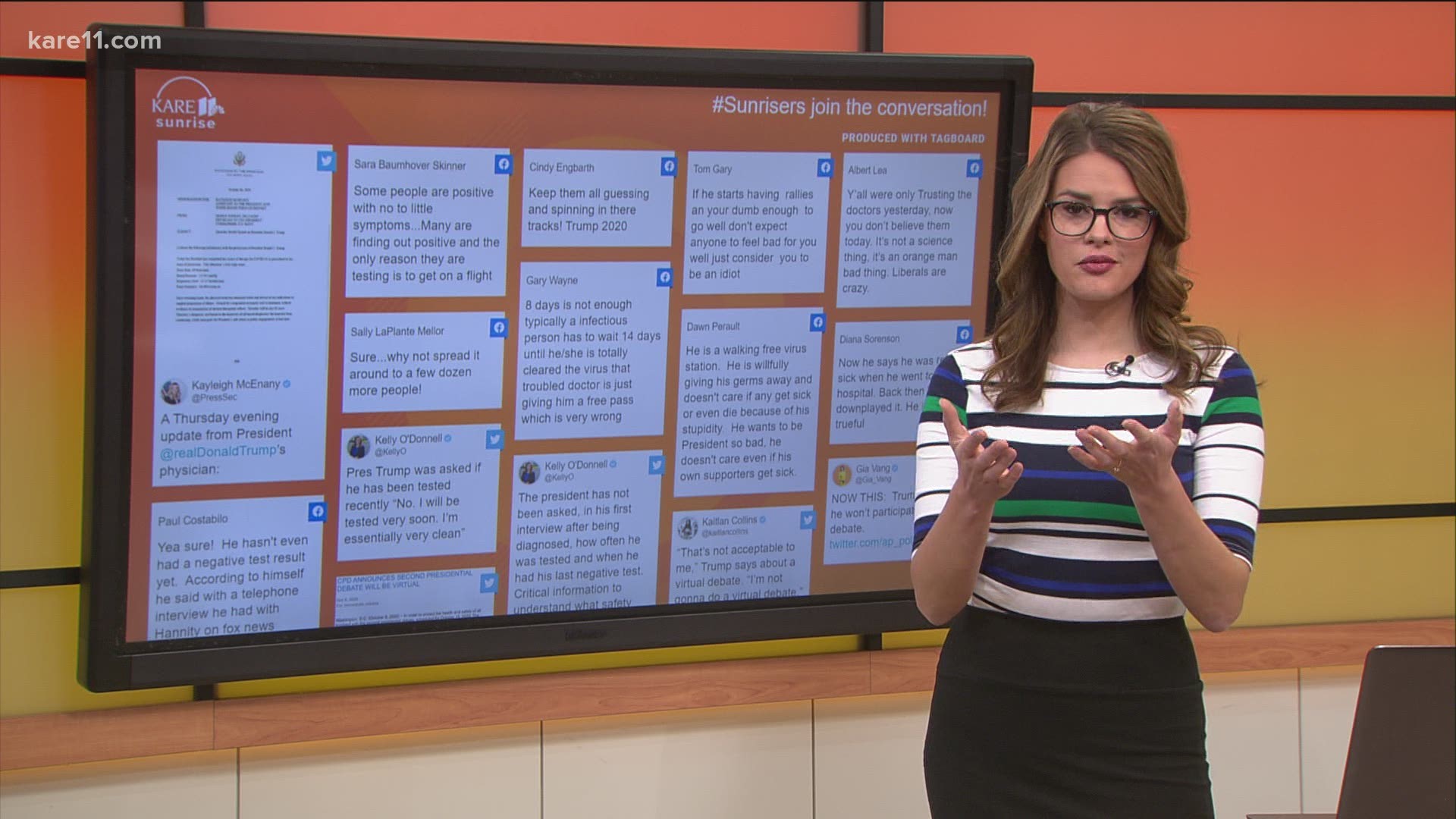 WASHINGTON, D.C., USA — Looking to shove his campaign back on track, President Donald Trump and his team laid out an aggressive return to political activities on Friday, including a big Saturday White House event and a rally in Florida on Monday, a week after his hospitalization for the coronavirus that has killed more than 210,000 Americans.

As questions linger about his health — and Democratic opponent Joe Biden steps up his own campaigning — Trump planned to leave Washington for the first time since he was hospitalized. He is also increasing his radio and TV appearances with conservative interviewers, hoping to make up for lost time with just over three weeks until Election Day and millions already voting.

The president has not been seen in public — other than in White House-produced videos — since his return days ago from the military hospital where he received experimental treatments for the virus.

Two weeks after his Rose Garden event that has been labeled a “super-spreader” for the virus, Trump is planning to convene another large crowd outside the White House on Saturday on a law-and-order theme. More than two dozen people linked to the White House have contracted COVID-19 since the president's Sept. 26 event announcing Judge Amy Coney Barrett as his nominee to the Supreme Court.

Trump will address the Saturday group, expected to be at least several hundred supporters, from the White House balcony. All attendees are to be required to bring masks or will be provided with them, and also will be given temperature checks and asked to fill out a brief questionnaire. Following of CDC guidelines will be strongly encouraged, which include mask-wearing and social distancing.

Trump's Monday rally in Sanford, Florida, was originally scheduled to be held on Oct. 2, the day after he tested positive.

RELATED: President Trump sets out to get election campaign back on track

He said of the Barrett event in an interview with The Associated Press, “I was not surprised to see a super-spreader event given the circumstances." That means “crowded, congregate setting, not wearing masks. It is not surprising to see an outbreak," he said.

District of Columbia virus restrictions prohibit outdoor gatherings larger than 50 people, although that rule has not been strictly enforced. Masks are mandatory outdoors for most people, but the regulations don’t apply on federal land, and the Trump White House has openly flouted them for months.

And next week in Florida? Trump tweeted on Friday that he would be in Sanford “for a very BIG RALLY!”

Meanwhile, next Thursday's town hall-style Trump-Biden debate was officially canceled, a few days after Trump backed away when the sponsoring commission switched it from face-to-face to virtual following Trump's COVID diagnosis.

Trump said the Commission on Presidential Debates was protecting Biden from having to take on the president in person. But Biden's team said the one demanding protection was Trump.

“It’s shameful that Donald Trump ducked the only debate in which the voters get to ask the questions -- but it’s no surprise,” said Biden spokesman Andrew Bates. “Everyone knows that Donald Trump likes to bully reporters, but obviously he doesn’t have the guts to answer for his record to voters at the same time as Vice President Biden.”

Trump is now making the rounds of friendly conservative media, calling in to Fox News host Sean Hannity Thursday night and spending two hours live on air with radio host Rush Limbaugh Friday in what his campaign billed as a “radio rally.”

Holding court on his reelection battle, his fight against the coronavirus and revived negotiations with Democrats to pass an economic stimulus bill, Trump was making a direct appeal to his base of loyal supporters, whom he needs to turn out to the polls in droves. He following with a taped appearance on Tucker Carlson’s Fox News show Friday evening.

Fauci said in his AP interview, “Let me just tell you what the CDC guidelines are for getting people to be able to go back into society. It generally is 10 days from the onset of your symptoms.”

That onset for Trump was Oct. 1, according to his doctors. The president's White House doctor, Navy Cmdr. Sean Conley, said that means Trump, who has been surrounded by minimal staffing as he works out of the White House residence and the Oval Office, could return to holding events on Saturday.

Conley added that Trump was showing no evidence of his illness progressing or adverse reactions to the aggressive course of therapy he has received.

While reports of reinfection in COVID-19 victims are rare, the Centers for Disease Control and Prevention recommends that even people who recover from the disease continue to wear masks, stay distanced and follow other precautions. It was unclear if Trump, who has refused mask wearing in most settings, would abide by that guidance.

In the interview with Limbaugh, Trump again credited the experimental antibody drug he received last week with speeding his recovery.

“I was not in the greatest of shape," he said. "A day later I was fine.” He promised to expedite distribution of the drug to Americans in need, though that would require action by the Food and Drug Administration.

He speculated to Limbaugh that without the drug, "I might not have recovered at all.” However, there is no way to know how the drug affected his progression with the virus.

Despite public and private surveys showing him trailing Democrat Biden, Trump predicted a greater victory in 2020 than four years ago. He won a majority in the Electoral College in 2016, though he lost the national popular vote to Democrat Hillary Clinton.

As for economic aid to businesses and individuals harmed by the pandemic, he said, “I would like to see a bigger stimulus package frankly than either the Democrats or the Republicans are offering." He made that comment just days after calling off talks with House Speaker Nancy Pelosi “until after the election” because the GOP balked at the high price tag of the aid she was calling for.