The president went to a medical equipment distributor in Allentown, Pennsylvania, and talked about the national stockpile, as U.S. COVID-19 cases top 1.4 million. 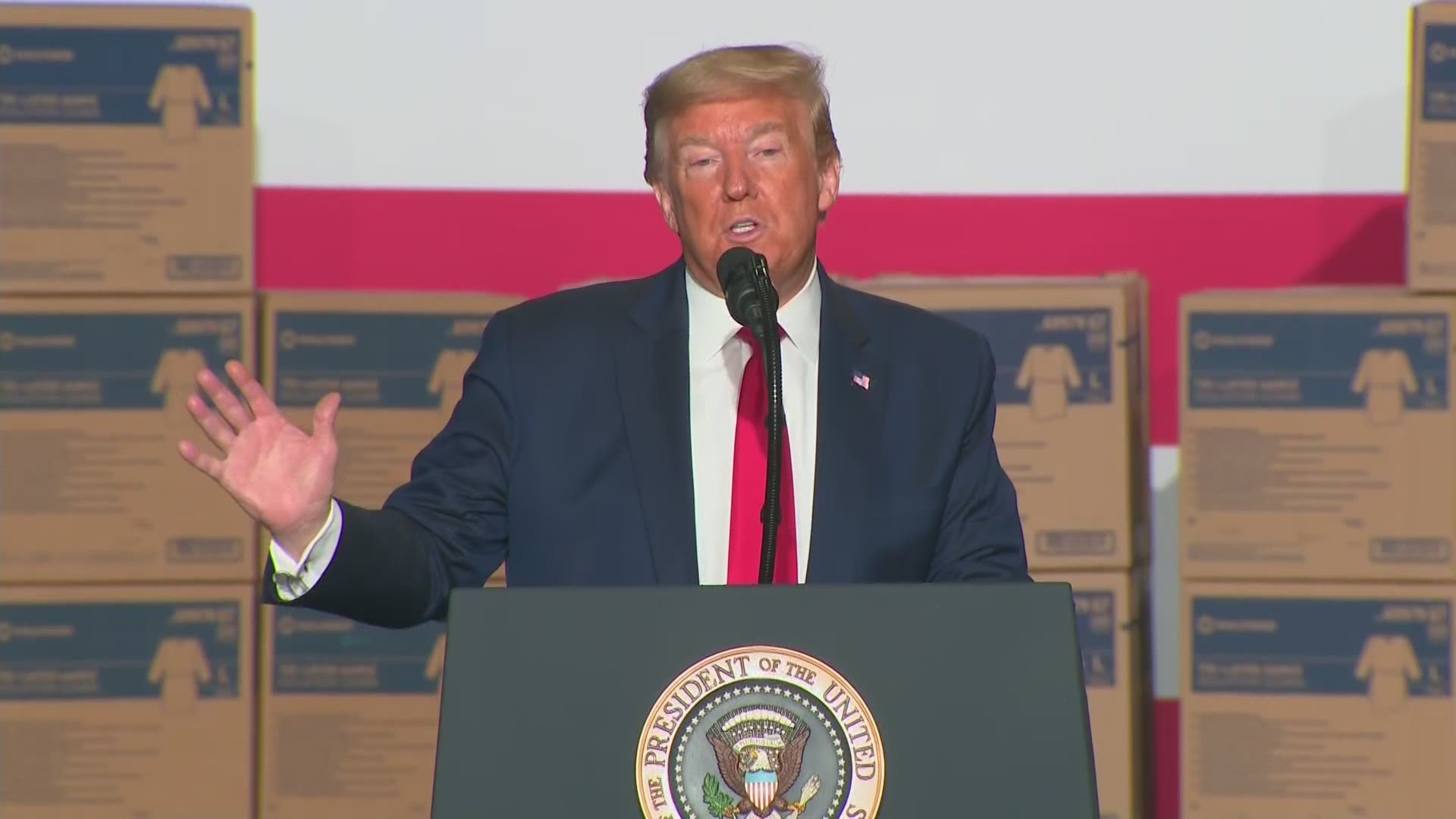 WASHINGTON — President Donald Trump said Thursday that he intends to prepare the country for future pandemics by restocking the national stockpile and bringing critical manufacturing back to the U.S. His comments came the same day a whistleblower testified that the Trump administration had failed to properly prepare for the current pandemic.

“Wouldn't that be nice?” Trump said during a visit to a Pennsylvania distributor of medical equipment. “My goal is to produce everything America needs for ourselves and then export to the world, including medicines.”

Trump had complained about supply chains in a television interview that aired before he left Washington for the trip to Owens and Minor Inc. in Allentown.

“These stupid supply chains that are all over the world — we have a supply chain where they’re made in all different parts of the world,” Trump said in the interview with Fox Business Network. "And one little piece of the world goes bad, and the whole thing is messed up.”

“We should have them all in the United States,” he said.

It was Trump's second trip outside Washington in as many weeks as tries to convince the public that it's time for states to begin to open up again, even with the virus continuing to spread. Trump’s remarks came as federal whistleblower Rick Bright testified before a House panel on Thursday about his repeated efforts to jump-start U.S. production of respirator masks that he says went nowhere.

Pennsylvania Gov. Tom Wolf, a Democrat, is under mounting pressure to roll back coronavirus restrictions after effectively containing the state’s outbreak early on, battling a Republican revolt over his stay-at-home orders and business shutdowns. Counties have threatened to defy his orders while at least a few business owners have reopened their doors despite his warnings.

Trump added to the pressure by saying during his remarks: “We have to get your governor of Pennsylvania to start opening things up a bit.” Trump claims some places in the state had been “barely affected.”

The U.S. has the largest coronavirus outbreak in the world by far: more than 1.4 million infections and nearly 85,000 deaths, according to a tally by Johns Hopkins University. Worldwide, the virus has infected more than 4.4 million people and killed more than 300,000. Experts say the actual numbers are likely far higher.

Credit: AP
Supporters line the side of the road waiting for President Donald Trump's motorcade to drive past on Thursday, May 14, 2020, in Allentown, Pa. (AP Photo/Matt Rourke)

The president arrived in Allentown on a campaign-like visit to highlight a U.S. medical equipment distributor that is helping make and ship gowns, gloves and other personal protective gear across the country to help with the coronavirus response.

Trump did not wear a face covering as he stepped off Air Force One. During the flight, chief of staff Mark Meadows wore a navy blue face mask embossed with the presidential seal in gold. Officials wipe down the handrails on the staircase before Trump arrived.

Scores of people lined the motorcade route, and the crowd grew thicker — with many of them barefaced — and began to chant “USA!” and “Four more years!” as Trump arrived at Owens and Minor.

After a tour, during which Trump also did not wear a mask, he addressed several dozen employees clad in matching neon yellow company T-shirts, all wearing face masks and sitting with appropriate distance between them.

Trump said that he wants to ensure that the next president doesn't inherit an empty stockpile and that he would build up a three-month supply of items like ventilators and N95 respirator masks that have been in short supply. He said he'd like many of these items to be American-made.

As the pandemic took hold in the U.S. earlier this year and governors desperately sought the federal government's help with supplies and equipment, Trump's son-in-law and senior advisor, Jared Kushner, sparked outrage by referring to the national stockpile as “our stockpile" and saying its contents were not meant to be shared with the states.

Some states found themselves competing against, and at times losing to, the federal government in the hunt for supplies.

Trump said he wants to bring “critical” manufacturing back to America and announced that he'd signed an executive order during the relatively short flight to Pennsylvania to require an obscure federal agency that invests in other countries to begin investing in the U.S.

“I’m determined that America will be prepared for any of the future outbreaks,” Trump said.

While health and safety precautions around the president have increased in recent days, Trump has yet to be seen in public wearing a mask. The Centers for Disease Control and Prevention says Americans should wear cloth face coverings in public in situations where social distancing is difficult to prevent unknowingly spreading the virus. Trump is tested daily for the virus; the White House says he is negative.

Owens and Minor says it has put in place new procedures because of the virus, including restricting visitors to its distribution and manufacturing facilities and requiring employees to wear personal protective equipment and undergo temperature checks.

Pennsylvania has set masking and social distancing requirements for all businesses that are allowed to operate.

Trump won the state by a mere 44,000 votes four years ago. But in a backlash against him, in 2018, the Allentown area elected a Democrat to represent it in Congress for the first time in two decades.

Allentown is about 75 miles (120 kilometers) from Scranton, where presumptive Democratic presidential nominee Joe Biden was born. The former vice president's campaign has become increasingly hopeful of returning Pennsylvania to the Democratic column, where it had been from 1992 until 2016.

Pennsylvania is 10th among states in overall infection rate, with some 59,000 confirmed coronavirus cases, or roughly 450 per 100,000 residents, and nearly 4,000 deaths, according to federal statistics.

New infections have been trending down, though, and Wolf has been easing restrictions in lightly affected counties, but not fast enough for some.

Trump weighed in on the intensifying political fight Monday by tweeting: “The great people of Pennsylvania want their freedom now, and they are fully aware of what that entails.”