Gov. DeWine's announcement comes as the state plans to open its first mass vaccination site at the Wolstein Center in downtown Cleveland. 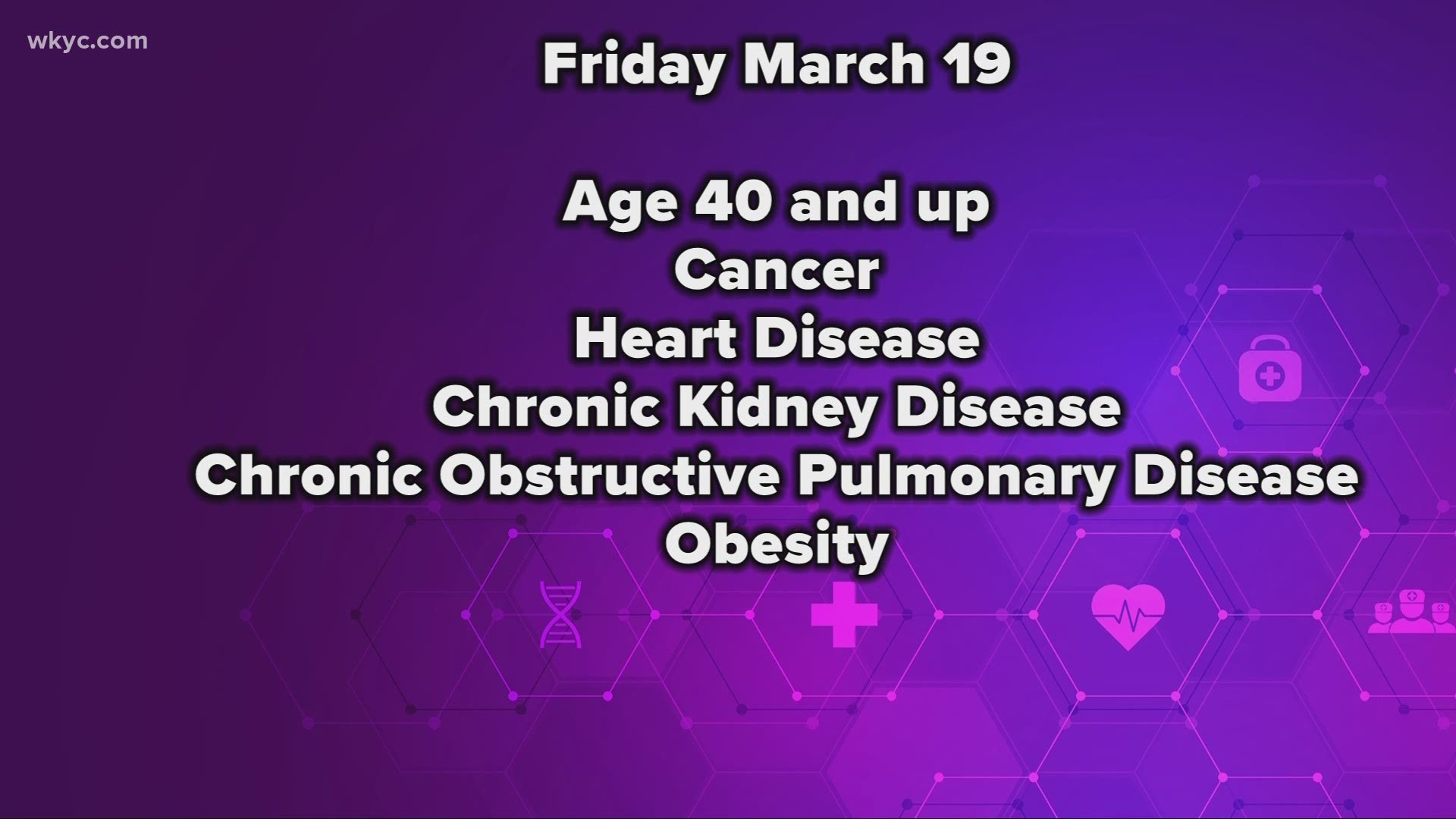 CLEVELAND — Ohio Gov. Mike DeWine has announced that all Ohioans ages 16 and older will be eligible to receive a COVID-19 vaccine starting Monday, March 29. He made the announcement Tuesday morning during a press conference at the Wolstein Center in Cleveland, which is home to the state's first mass COVID-19 vaccination clinic.

That date comes weeks ahead of President Joe Biden's goal to open eligibility to all adults by May 1.

DeWine also noted that teens who are ages 16 and 17 are only eligible to receive a Pfizer vaccination. That's because the FDA emergency-use authorization for Moderna and Johnson & Johnson vaccines only covers those who are 18 and older.

This group includes Ohioans with the following health conditions:

Gov. DeWine said Phase 1E includes approximately 766,000 people who would not be otherwise eligible by age or other qualifying medical condition. When asked how they would determine if somebody is considered obese, Gov. DeWine said it's based on trusting that person's word without requiring proof from a doctor.

“We made the decision that Ohioans are honest, Ohioans have good faith and we don’t want to create another barrier for someone to get it," Gov. DeWine explained. "If you require them to go in and get a doctor’s certificate, then that would be one more barrier, one more thing that they’ve got to jump over. We’re treating it just like we’ve treated every other area. It’s basically, you identify that way and we’re going to take you.”

Gov. DeWine said this group includes approximately 818,000 more people to the list of those who are eligible.

RELATED: Ohio's COVID-19 vaccination registration site: How to sign up for an appointment near you

Supply, however, remains limited despite more shipments of new doses coming to the state of Ohio. Gov. DeWine said the state expects to receive approximately 400,000 shots this week with another 400,000 expected next week.

𝗢𝗵𝗶𝗼 𝗩𝗮𝗰𝗰𝗶𝗻𝗲 𝗘𝗹𝗶𝗴𝗶𝗯𝗶𝗹𝗶𝘁𝘆 𝗨𝗽𝗱𝗮𝘁𝗲: It's a moral imperative that we move as quickly as we can to vaccinate all Ohioans who wish to be vaccinated. We expect a significant increase in vaccines coming to Ohio soon, so we will expand vaccine eligibility. ⬇ pic.twitter.com/jjFXtMhtf4

We streamed Gov. DeWine's vaccination eligibility announcement, which you can watch again in the player below: