Lt. Gov. Jon Husted notes that while these practices are allowed to begin June 22, it will be up to local sports organizers to make the final call. 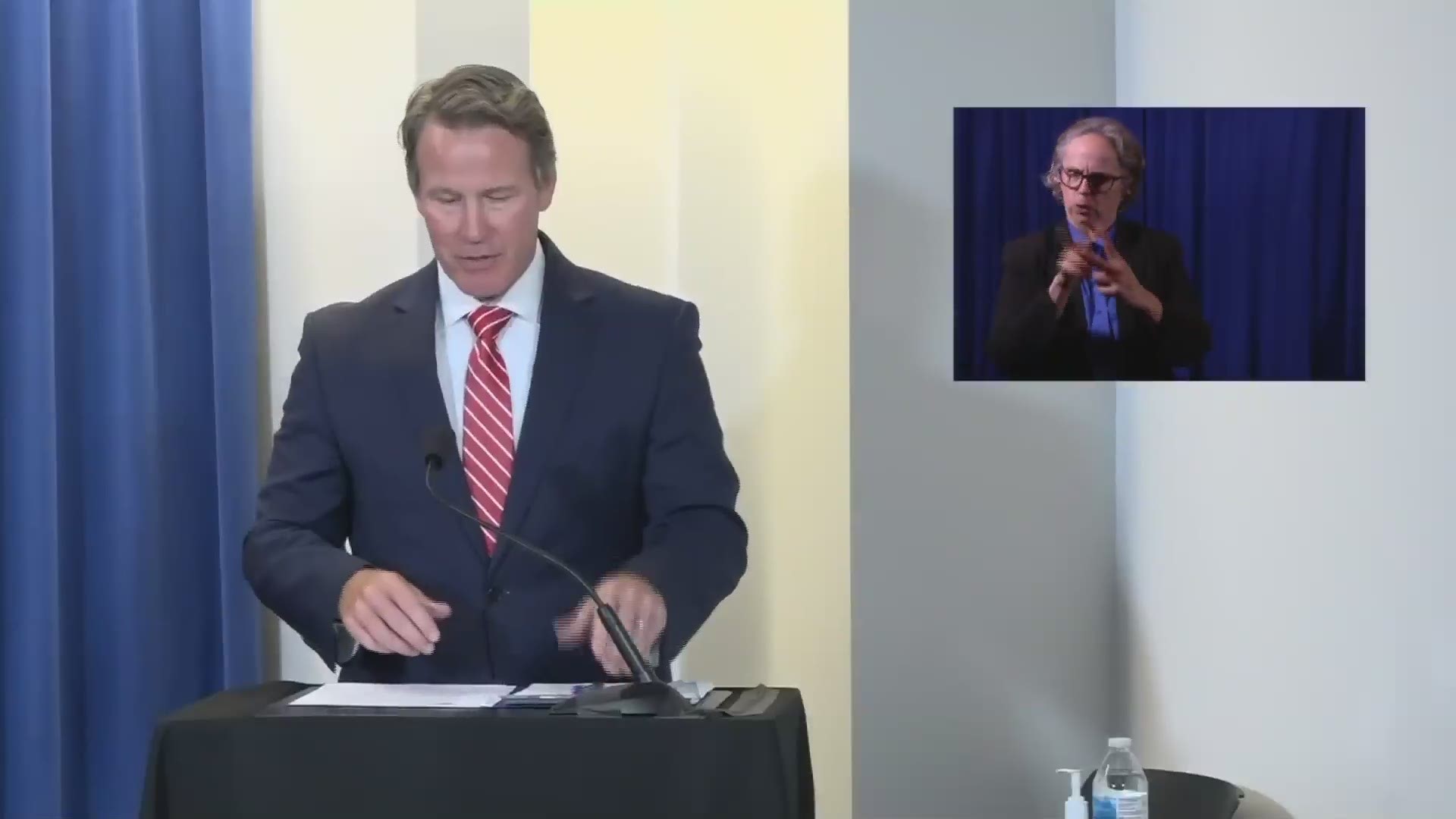 Here is a breakdown of Thursday's conference:

At the beginning of May, leaders announced Phase 1 of the reopening plan for athletics in the state.

On May 26, athletes were able to begin skills training.

Husted noted that while June 22 is the date that contact practice is allowed to begin, it will be up to local sports organizers and high school leaders on when it is the best time to proceed.

Training guidance will be updated soon on coronavirus.ohio.gov.

A number of counties in southwest Ohio have seen a recent spike in COVID-19 cases.

DeWine said the National Guard would be stepping in to help increase testing in the zip codes that are considered hot spots and that residents could expect to see a number of pop-up testing sites in order to combat further spread of the virus.

The goal is to have temporary testing sites set up in the impacted zip codes within the next 10 days to provide surge testing for these areas.

DeWine said that when it comes to combating the virus in these areas, orders would only be issued as a last resort.

Earlier this week, DeWine announced that testing capacity in the state had greatly expanded, with any Ohioan who wants a test now able to get one.

DeWine announced a new hospital PPE readiness stockpile, compiled and stored by hospitals across the state. These will be distributed to long-term care facilities throughout Ohio should they see a spike in coronavirus cases and need them.

Dr. Amy Edwards, M.D. explained that children are nowhere near as impacted as the elderly when hit comes to coronavirus. However, she said doctors are seeing an increase of children testing positive for COVID-19.

While they are increasing testing, she said that overall, the percentage of positive tests in children is now higher than it was earlier in the pandemic.

Edwards also said there has been a slight uptick in hospital admissions in children related to coronavirus.

But, what should parents look for? How should they react?

Edwards said that they symptoms are similar in children as they are in adults. As a respiratory virus, you will see cough, shortness of breath, maybe a runny nose, etc. And if these symptoms are mild and manageable, you may not need to do anything at all. However, if your child is having a bit more trouble breathing than they normally do or if they are struggling with their appetite, you may want to reach out to your pediatrician to get tested.

In response, Husted said the state's coronavirus job search site will make the transition back to OhioMeansJobs.com.

DeWine said that his team has carved out a lot of exceptions to the large gathering rule.

He said, in general, when people gather, distance is key.

DeWine said people need social interaction and suggested that Ohioans simply use common sense when making plans with others and to make decisions that make sense for their family.

Visitation in Prisons and Nursing Homes

When asked about visitation to Ohio prisons, DeWine said it is a concern.

He said that visitation to both prisons and nursing homes has been a big issue for many Ohioans and it is a problem that his team is actively working on.

However, DeWine noted that 70% of Ohio's deaths have been in nursing homes and it is critical that leaders make decisions that will help fight the spread in these communal living areas.

More information on this should be coming in the near future, he said.

Tuesday was the first day that the state had to borrow money to be able to pay out unemployment.

Ohio requested $3.1 billion in borrowing authority from the U.S. Department of Labor.

Several other states, including California and Texas, have had to do this during the coronavirus crisis, and this isn't the first time Ohio has had to borrow money for unemployment.

Anyone can show up at these sites the day of for COVID-19 testing free of cost.

DeWine said that there will be many other pop-up locations coming and information will be provided closer to those dates.

A list of testing sites and community health centers can be found by clicking here.

Ohio Lt. Gov. Jon Husted said Thursday that unfortunately, there are people out there who see a crisis as an opportunity to take advantage of others. In perhaps the most widespread scam, criminals are filing fake unemployment claims on behalf of real people who haven't lost their jobs.

There are also official-looking notices claiming to be from the government that say you've been overpaid in stimulus or unemployment benefits and need to return the money immediately in an attempt to get your personal information.

Ohioans should be on alert if they receive information about a fake unemployment claim filed on their behalf.  If that happens, they should call the Ohio Department of Job and Family Services at 1-877-644-6562.

For helpful resources, go to coronavirus.ohio.gov and search for checklists.

On Thursday, DeWine announced $1 million in grant funding to Ohio’s local Family and Children First Councils. Local FCFCs serve some of Ohio’s most vulnerable children who often need services from many different agencies.

For many of the youth served by FCFCs, the changes to routines caused by coronavirus have been earth-shattering, especially for the ones who lack access to technology and the internet.  As services moved online, some of these youth were left without a connection to their doctors.

For others, such as those in foster care and residential settings, the pandemic separated them from their families and loved ones.

DeWine said that these grants will help local FCFCs ensure that our most vulnerable kids can continue to connect with their loved ones and access medical care.

All Ohio children ages 1 through 18 are able to receive free meals during the summer months at participating program sites. Individuals ages 19 through 21 who have been identified as having mental or physical disabilities and are following Individualized Education Programs (IEPs) through their current enrollment in educational programs also are eligible for free summer meals.

Last year, Husted said, Innovate Ohio announced a data analytic partnership with Ohio OBM, allowing leaders to identify instances in which a payment on a product or service was made more than once within the state government accounting system.

As of this week, DeWine said, the tool has identified over $1 million in duplicate payments since the program first began. Of that total, over $950,000 has been recovered.

School in the Fall

The state will be putting out guidance in about 10 days outlining the ultimate goals for schools as the prepare for the fall, but a lot of the decisions will be made locally. He said that is the history of what the state of Ohio has done with its schools.

DeWine reminded Ohioans that throughout this crisis, houses of worship have not been required to close down.

However, DeWine said he saw in an article laying out a COVID-19 outbreak associated with a church in Clark County.

DeWine encouraged church-goers to remain vigilant and stay cautious. ODH leaders have compiled a list of best practices in an effort to keep people safe. That list can be found by clicking here.

The protocol is, to test all employees and select residents based on what the clinicians decide from a medical point of view.

The goal, DeWine said, is to go through all nursing homes in the state. A procedure is currently being worked on to determine what the second round of testing might look like.

DeWine said an update on the numbers is coming on Thursday.

DeWine said that the state is continuing to release select prisoners who are within 90 days of release unless they have been convicted of a violent crime.

The program was created to help combat overcrowding of state prisons.

DeWine said he did not have the data in front of him Tuesday, but numbers from within state prisons regarding COVID-19 would be made available.

Last week, Dr. Amy Acton stepped down as Ohio Department of Health Director. In her place, Lance Himes, who served as a past ODH Interim Director, will again assume those duties.

Acton instead has taken on a new role as Chief Health Advisor, where she will continue to serve Ohioans.

on Thursday, DeWine said testing capabilities are no longer restricted, and any Ohioan who wants a test is now able to receive one.

An interactive map was added to the coronavirus.ohio.gov website that guides Ohioans toward testing sites in their area. The resource is continuously updated as more testing locations pop up. You can find that map by clicking here.

Driver examination station skills testing will resume on Friday, June 12 at select locations by appointment only, which can be made online here. The locations set to pickup exams on Friday include:

All other driver examination station skills testing will resume on Tuesday, June 16 by appointment.

RELATED: Gov. DeWine says he is concerned about kids' well being