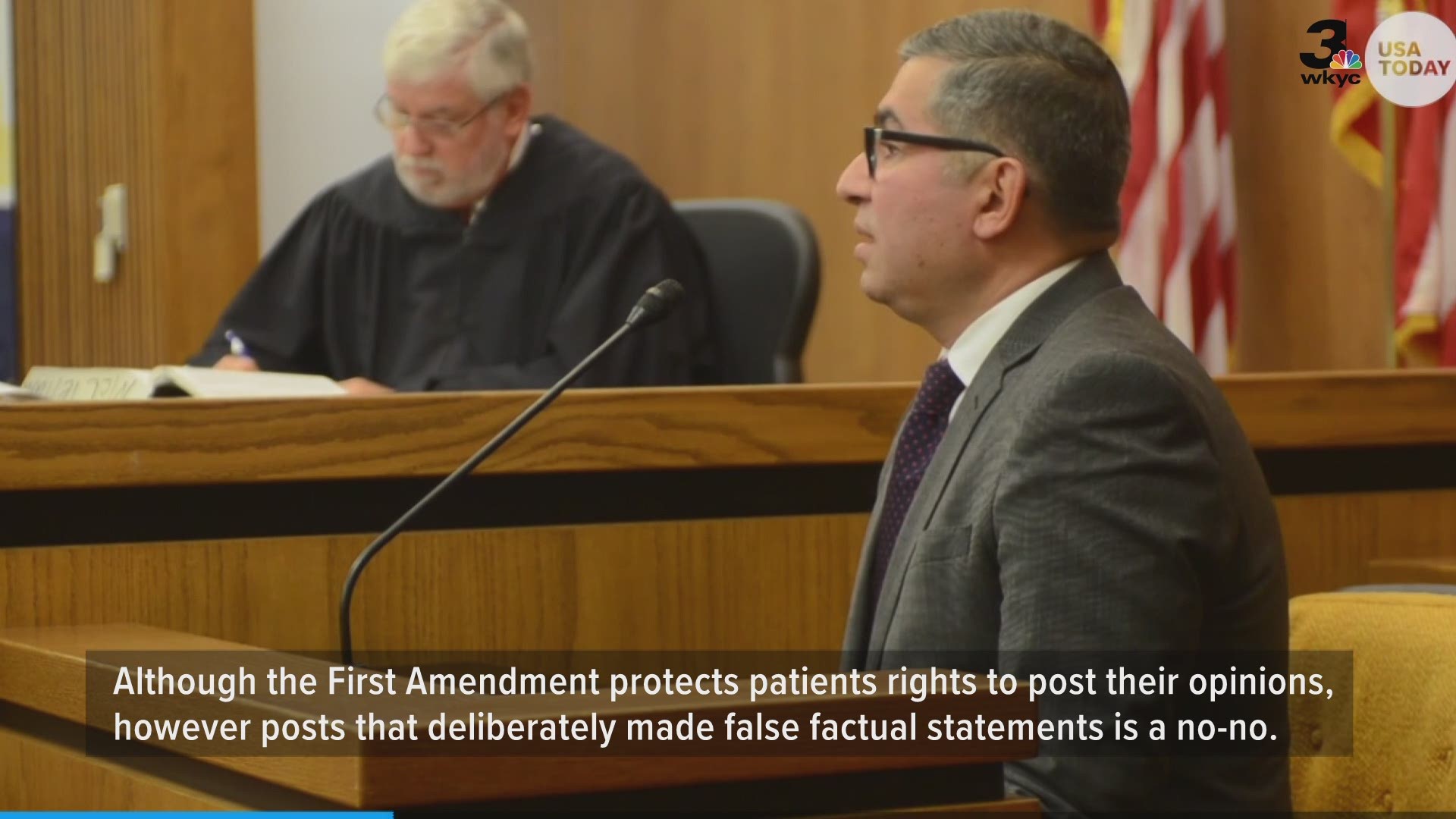 CLEVELAND – Retired Air Force Colonel David Antoon agreed to pay $100 to settle what were felony charges for emailing his former Cleveland Clinic surgeon articles the doctor found threatening and posting a list on Yelp of all the surgeries the urologist had scheduled at the same time as the one that left Antoon incontinent and impotent a decade ago.

He faced up to a year in prison.

Antoon's 10-year crusade against the Cleveland Clinic and his urologist is unusual for its length and intensity, as is the extent to which Cleveland Clinic urologist Jihad Kaouk was able to convince police and prosecutors to advocate on his behalf.

Antoon's plea deal last week came as others in the medical community aggressively combat negative social media posts, casting a pall over one of the few ways prospective patients can get unvarnished opinions of doctors.

• Cleveland physician Bahman Guyuron sued a former patient for defamation for posting negative reviews on Yelp and other sites about her nose job. Guyuron's attorney Steve Friedman says that although the First Amendment protects patients' rights to post their opinions, "our position is she did far beyond that (and) deliberately made false factual statements." A settlement mediation is slated for early August, and a trial is set for late August if no agreement is reached.

• Jazz singer Sherry Petta used her own website and doctor-rating sites to criticize a Scottsdale, Arizona, medical practice over her nasal tip surgery, laser treatment and other procedures. Her doctors, Albert Carlotti and Michelle Cabret-Carlotti, successfully sued for defamation. They won a $12 million jury award that was vacated on appeal. Petta claimed the court judgment forced her to sell a house and file bankruptcy. The parties would not discuss the case and jointly asked for it to be dismissed in 2016 but declined to explain why.

• A Michigan hospital sued an elderly patient’s two daughters and a granddaughter over a Facebook post and for picketing in front of the hospital they said mistreated the late Eleanor Pound. The operator of Kalkaska Memorial Health Center sued Aliza Morse, Carol Pound and Diane Pound for defamation, tortious interference and invasion of privacy.

Petta's attorney, Ryan Lorenz, says consumers need to know there can be consequences if they post factually incorrect information. Lorenz, who has represented both consumers and businesses on cases involving online comments, says consumers are allowed to offer opinions that do not address factual points.

“Make sure what you are saying is true – it has to be truthful,” he says.

"It would be great if the regulators of hospitals and doctors were more diligent about responding to harm to patients, but they’re not, so people have turned to other people," says Lisa McGiffert, former head of Consumer Reports' Safe Patient Project. "This is what happens when your system of oversight is failing patients."

As doctors and hospitals throw their considerable resources behind legal fights, some patients face huge legal bills for posting critiques and other consumers face their own challenges trying to get a straight story.

Experts say doctors take on extra risk when they resort to suing a patient.

Doctors typically can’t successfully sue third-party websites such as Yelp that allow consumer comments, but they can sue patients over reviews. 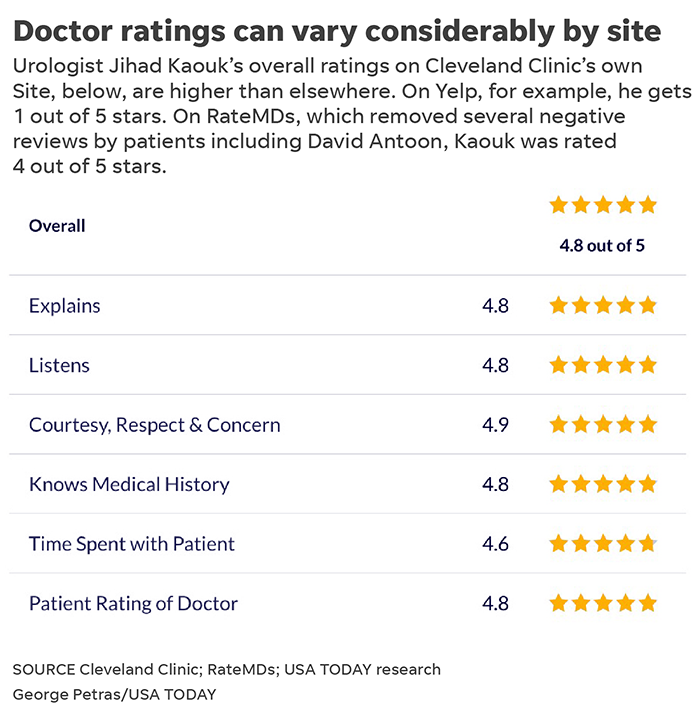 Even so, "you can win (a case) and still not win,” says Eric Goldman, a professor at Santa Clara University's law school.

Goldman, who has tracked about two dozen cases of doctors suing patients over online reviews, says physicians rarely win the cases and sometimes must pay the patients’ legal fees.

Physician-patient confidentiality rules complicate options for doctors, Goldman says, but they can respond to factually incorrect reviews if the patient agrees to waive confidentiality and publicly discuss the case.

The comments challenged legally are typically those that were left online. Many medical review sites will remove posts they deem offensive or threatening to doctors, as many of Antoon's or other Kaouk patients' were. Yelp removes reviews only if they violate the consumer website's terms of service.

Patients should first bring up complaints directly to the doctor or other medical provider, says Edward Hopkins, an attorney who represented Carlotti, Cabret-Carlotti and their medical practice for part of the case. Other options could include reporting a doctor to state oversight agencies, consulting with an attorney or filing complaints with a state attorneys' general office.

By the time he was arrested last December, Antoon had tried most every option with very little success.

Along the way, Antoon became a patient advocate – volunteering with Consumer Reports' Safe Patient Project and HealthWatch USA – and advising others who say they were harmed by Kaouk and the Cleveland Clinic.

Cleveland Clinic, one of the top-rated hospitals in the country, has an aggressive legal department. Kaouk and the clinic prevailed in malpractice and fraud cases filed by Antoon and other patients who claimed they were harmed.

To Kaouk, a decade of negative reviews on social media led to what he considered an escalation when Antoon sent him several emails, including one with a link to an article about a Chinese crackdown on research fraud that could include the death penalty if people were injured or killed.

The day before Antoon posted on Yelp in November, Kaouk was granted a civil stalking protective order against Antoon, which barred him from contacting the doctor.

"What would be next – showing up at my door?" Kaouk said in court. "That's what we feared." 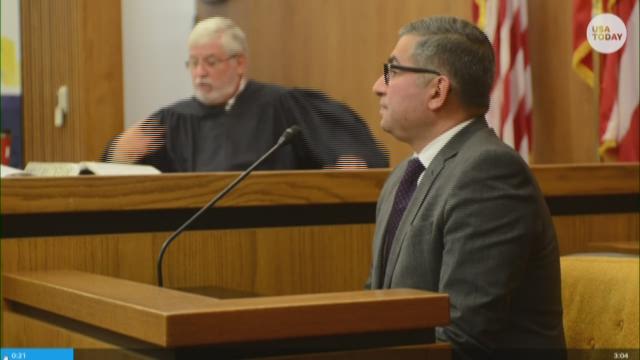 In his posts and emails, Antoon documented alleged issues, including Kaouk and the urology department's lack of credentials to use the robotic device in his surgery. He sent records to the Centers for Medicare and Medicaid Services (CMS), claiming they showed Kaouk was not present in the operating room during his surgery despite his insistence that only Kaouk could perform the surgery.

The Ohio Medical Board closed its investigation into Kaouk after five years without reprimanding him in any way. Antoon's complaints to CMS temporarily put the hospital's $1 billion annual Medicare reimbursement at risk.

Antoon's claims were rejected, and Kaouk was not held liable for the surgery that left Antoon impotent and incontinent.

Along with more than $40,000 defending himself against the criminal charges, Antoon spent almost two days in jail. He had to post $50,000 bond in Shaker Heights and again in Cleveland's Cuyahoga County after the case was transferred there.

It's common "for someone in a position of wealth, power and money to go after someone like David to silence critics," says Antoon's attorney, Don Malarcik. "That happens often and it happened here."

Hospitals, including the Cleveland Clinic, combat negative comments with their own rating systems, which let them "control their message," McGiffert says.

Some comments posted by Antoon and Dan Galliano, another patient who claimed he was injured, disappeared from the websites RateMDs and Vitals, as shown in screenshots Antoon took right after they were posted.

Cleveland Clinic spokeswoman Eileen Sheil says it posts all the government-required satisfaction survey responses patients fill out about doctors on its ratings site, once at least 30 are received. Comments aren't edited.

Sheil says Cleveland Clinic will request comments to be removed from other sites when they violate the sites' terms of service.

RateMDs did not respond to requests for comment. Vitals spokeswoman Rosie Mattio says the site has a care team that will investigate reviews it is contacted about.

"While we will not pull down a necessarily negative review, we will remove the review if we find that it violates our terms and includes material that is threatening, racist or vulgar," Mattio says.

On Yelp, business owners can flag a review to be removed for violation of Yelp’s terms of services. Yelp reviews flagged comments and removes those that include hate speech or a conflict of interest or that are not based on a commenter’s firsthand experience.

The website doesn't intervene over factual disputes, Yelp spokeswoman Hannah Cheesman says. Instead, it classifies consumer reviews as “recommended” or “not currently recommended” based on an automated software review.

If Yelp’s software detects multiple reviews from the same IP address or biased reviews from a competitor or disgruntled employee, it puts the comment in the not-recommended category. Consumers can still view such reviews by clicking on another page, but those comments are not factors in Yelp’s five-star rating system.

McGiffert has long advocated for a federal database where people could report medical errors and infections. Unless that happens, online review sites – including hospitals' own and ones that will remove some reviews doctors object to – are among the only places patients can find physician reviews.

Doctors such as Kaouk suggest they are the ones who are disadvantaged.

"It is something that if anybody would look just by Googling my name online, you would see what he has written about me," Kaouk says of Antoon.