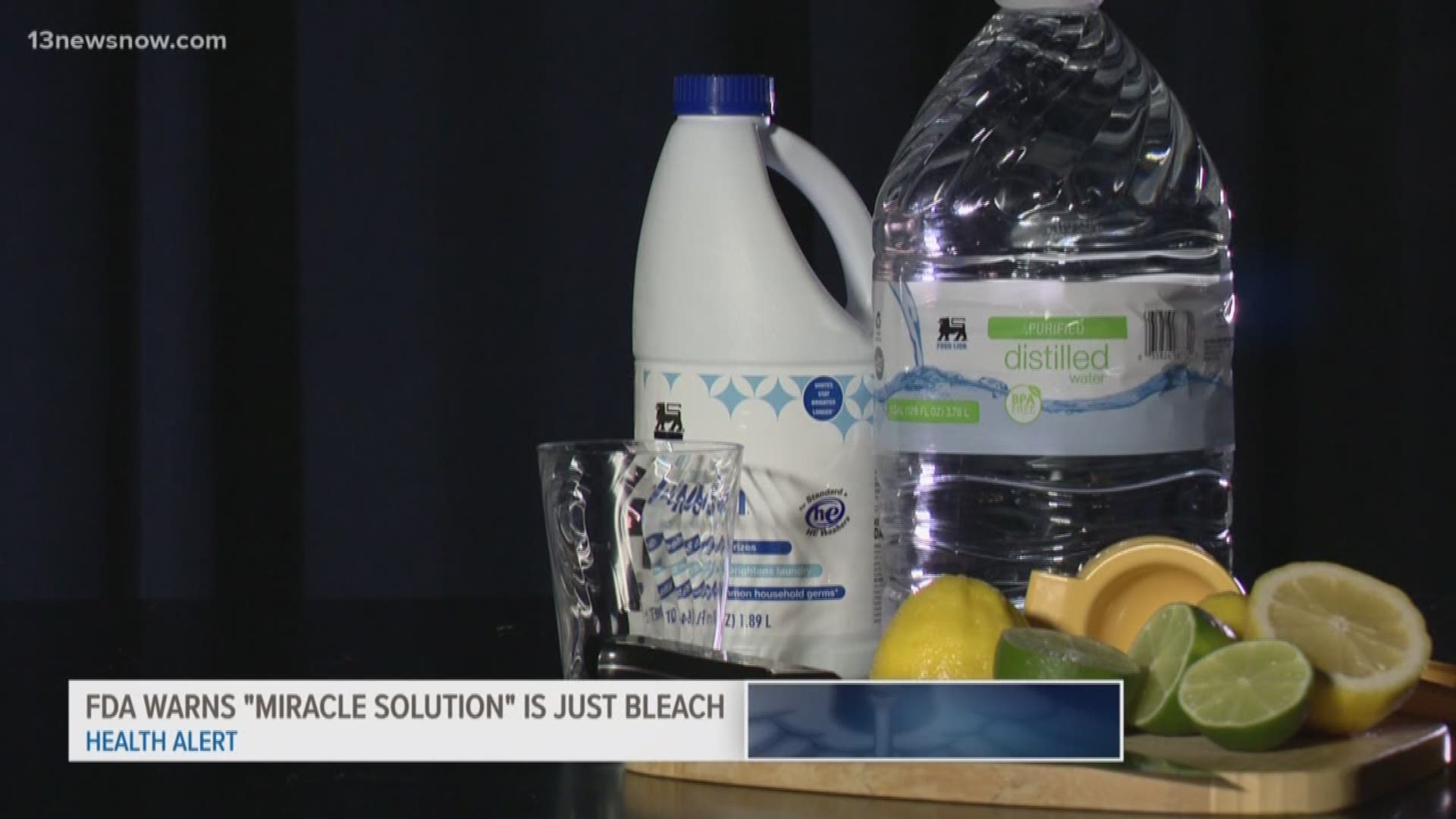 NORFOLK, Va. — Drinking bleach will not cure cancer, autism or the flu. The U.S. Food and Drug Administration is warning people not to buy or try Miracle Mineral Solution.

The solution promises the key to good health. On YouTube, Jim Humble said he created Miracle Mineral Solution in 1996. In one video he said you can avoid going to the doctor most of the time just by using MMS to get yourself through whatever disease you have.

Humble’s product is now in question with the FDA because it’s made with chlorine dioxide, which doctors said is an industrial bleach.

Humble claims the solution is an oxidizer that kills pathogens and destroys poisons and it can get rid of conditions and diseases such as autism, cancer, multiple sclerosis, and even hepatitis. He told people on his website that his product has saved thousands of lives since the 1990s.

“I think a lot more people are becoming interested in nowadays. We call it people are waking up,” explained Humble.

Medical professionals around the world are warning people not to buy or make Miracle Mineral Solution at home.

EVMS Attending Physician at Ghent Family Medicine John Snellings said, “To me, it seems like grabbing a bottle of Clorox off the shelf and taking a swig out of that, and I would just as strongly advise against doing that as I do against using these products.”

The concoction is so dangerous, the FDA continues publishing warnings.

“There is absolutely no scientific evidence that drinking bleach would have any benefit for any of those conditions,” Snellings said.

According to the FDA’s website, it says it received reports of people who suffered from severe vomiting, severe diarrhea, life-threatening low blood pressure caused by dehydration, and acute liver failure after drinking these products.

Since MMS product came out, two people died from ingesting chlorine dioxide according to the FDA’s reporting system. Several others were hospitalized with serious conditions.

“It just scares me that people would do this without consulting with their physician. Obviously, we would hope to provide them a little more direction in terms of this not being a realistic option for treatment,” explained Snellings.

MMS is not approved for the treatment of any disease according to the United States Environmental Protection Agency. Doctors said no matter the condition or disease, talk to your doctor before putting something in your body that could potentially kill you.

Just in the last couple of years, more than four people went to prison for selling MMS online. They were sentenced to several years for introducing misbranded drugs into interstate commerce with intent to defraud or mislead people.