An important meeting before Monica Robins' next brain surgery

In her last report before going on medical leave, our senior health correspondent interviews a patient who had the same surgery that Monica herself will undergo. 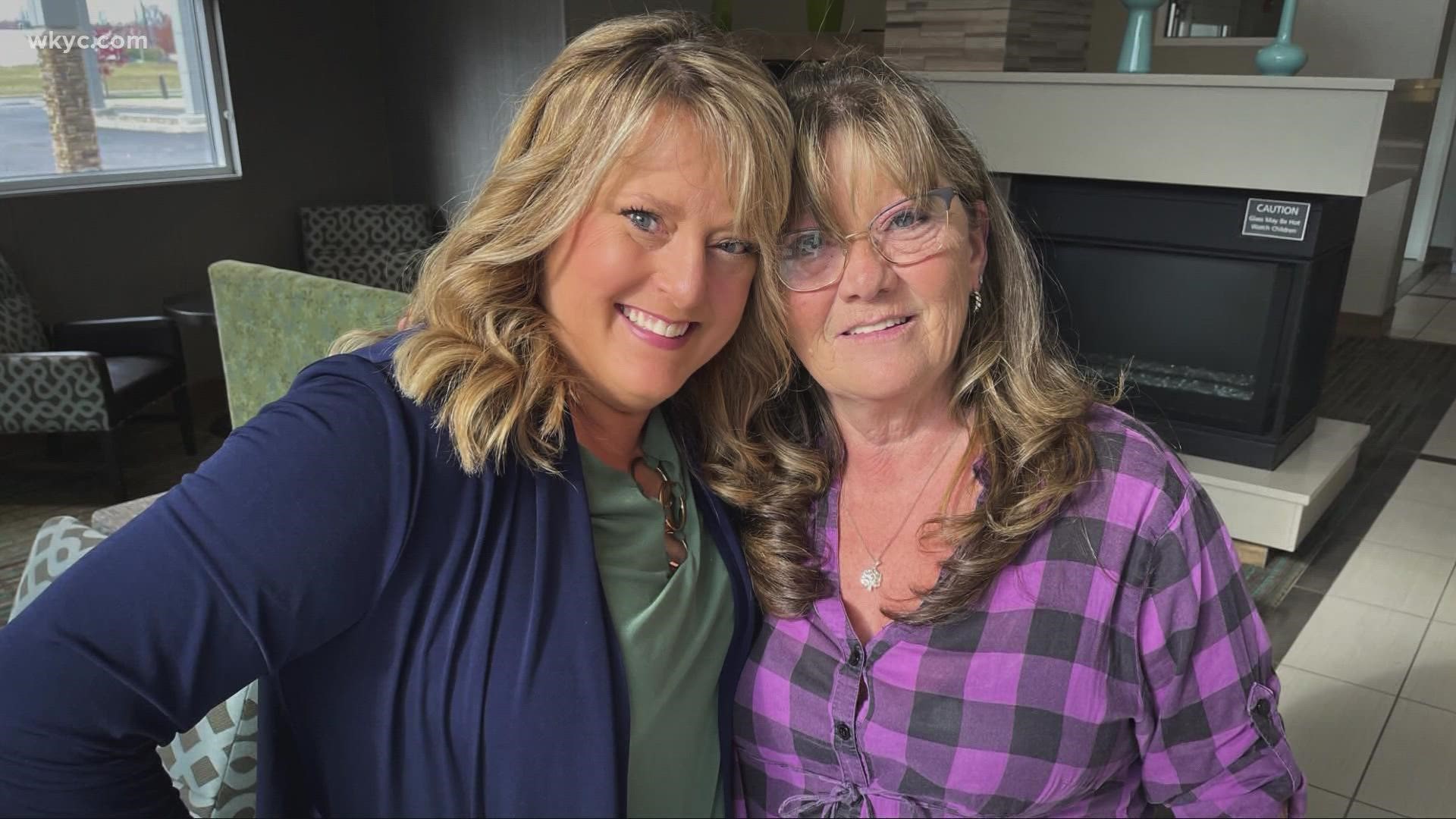 CLEVELAND — Did you ever meet someone, and instantly knew they understood everything you’ve been going through? For me, that’s what it was like to meet Crystal Cooper. She and I have similar of brain tumors. We both had craniotomies and then needed additional surgery because the tumors in our eye sockets began to spread. Crystal’s journey began a year ahead of mine.

“The biggest thing was the eye bulging, but we thought it was a vision issue because I had double vision and a lot of eye watering and headaches,” Crystal remembers. I remembered that too because I had the same symptoms before my first surgery in 2019. Last year Crystal learned she needed additional surgery, but instead of another craniotomy she had a different type of procedure.

“Well, they didn't go in through the skull this time they went through the eye and that's where you're headed,” she says to me.

Last November, Crystal became the first patient at Cleveland Clinic to get Transorbital Neuroendoscopic surgery or TONES. The eyelid scar, barely noticeable. I requested to speak to a patient, to help me get a real sense of what’s ahead for me. It’s someone anyone should do if they’re faced with an involved medical procedure.

I asked Crystal how long after surgery it took for her to return to normal. She said four to six months.

Like Crystal, Cleveland Clinic surgeons will access the tumor through my eyelid. Once there, they will drill away the tumor that infiltrated my bone and if necessary use my rib to rebuild my face. Crystal didn’t need bone replacement, but she shared recovery pictures with me, and explained what I should prepare for, including what to expect with the swelling, which is significant and lasts several weeks.

“It (eyelid) is closed until some of the swelling goes down and then over months it opens slowly,” she told me.

I will be the seventh patient at Cleveland Clinic to undergo the TONES procedure. While it’s not necessarily a new surgery, it’s not often performed because tumors like ours are relatively rare. The surgery requires several specialties, including my neurosurgeon, Dr. Pablo Recinos, and Facial Plastic and Reconstruction surgeon Dr. Dane Genther.

He’ll make an incision in my eyelid, to give Dr. Recinos access to the tumor.

Dr. Recinos did my first surgery, a craniotomy that involved a ten inch scar over my head and left me with three titanium plates covering the opening left behind. My tumor, known as a sphenoid wing orbital meningioma, infiltrated a significant portion of my skull. Dr. Recinos said he wore down two six millimeter surgical drill bits trying to remove what he could.

I knew going into surgery that he would not be able to get all of the tumor. Essentially he had to leave four parts behind. Residual tumor is still on my optic nerve, three millimeters away from crushing my carotid artery, on the back of my left eye and in my left eye socket. It’s the last tumor that’s causing the problems now. It decided to spread into my bone and into my cavernous sinus.

My surgeons won’t know the extent of surgery until they get in and see what they’re dealing with.

“We always go in and with some specific goals in mind of what we're going to be able to accomplish. And with meningiomas surgery, the goal generally speaking, is maximal safe removal of tissue while trying to minimize the harm that we cause,” Dr. Recinos said.

I’m incredibly grateful to not only have access to this type of procedure, but to meet Crystal and learn more. Ironically she’d been following my story too. What did she learn?

“I wasn't alone. I wasn't alone, even though I'd already gone through it all, you made me see that there's someone else that's surviving it as well,” she said.

I’m deeply grateful for all the well wishes and I hope my story can give strength to those who might need a little push.  I wish you all blessings this holiday season and I plan to be back with you in 2022.

Editor's Note: 3News saluted our beloved senior health correspondent with special tributes during What's New and What Matters Most. Check them out!