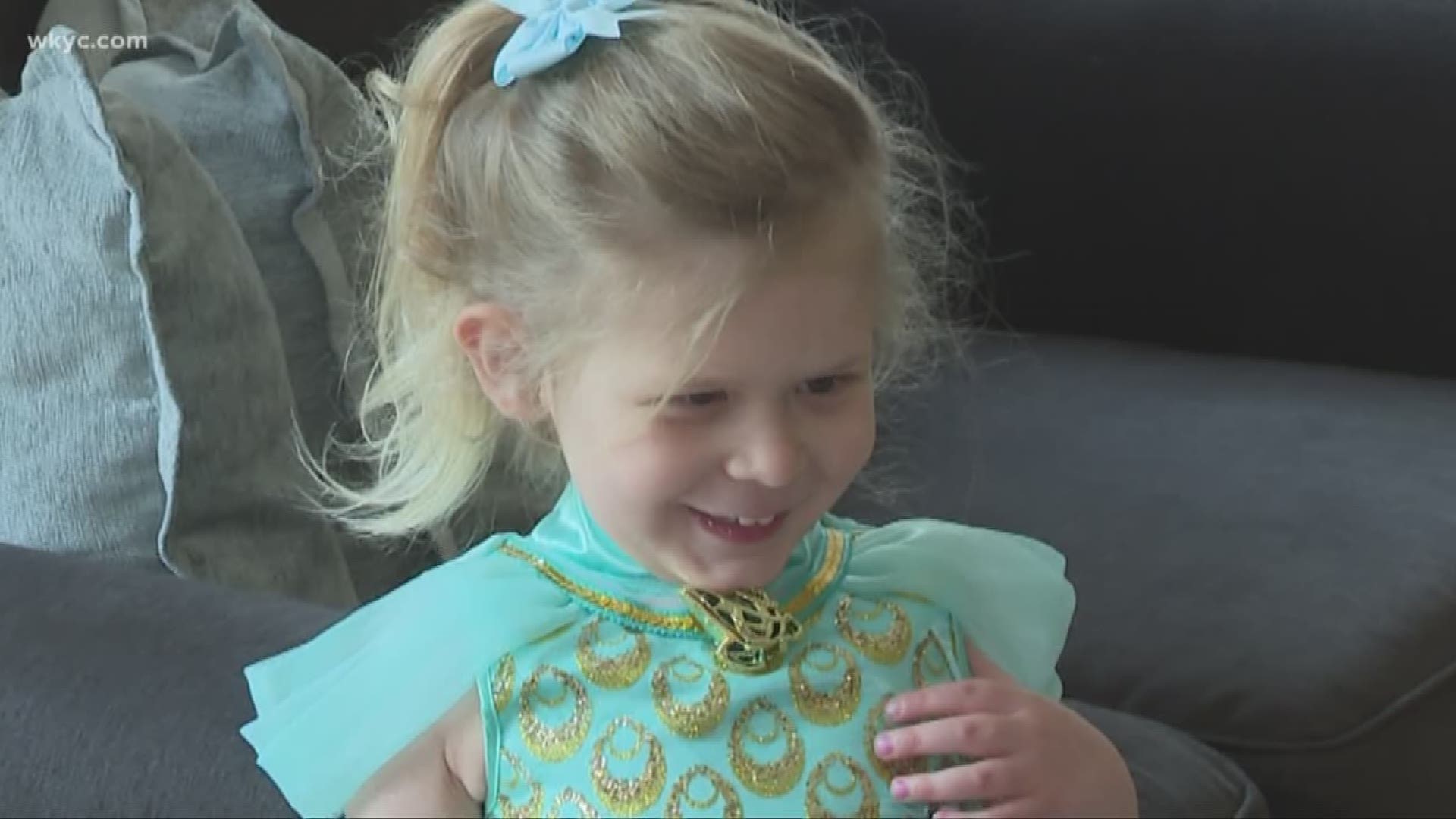 Her name is Clare. She loves hide-and-seek, bubbles, princesses and everything else a three-year-old should love.

But behind her little smile, this little girl is fighting a fatal disease.

“DIPG, which stands for Diffused Intrinsic Pontine Glioma, which is terminal brain cancer,” says mom Carla. She speaks the words with as much strength as she can muster as she watches her little girl push a Disney tea cart around and serve soup to her stuffed bunny rabbits.

It was Father’s Day 2018.  The family was getting ready to go to a farmer’s market when Clare told them she couldn’t walk. She could barely speak either. The family rushed her to Rainbow Babies and Children’s Hospital where over the next eight hours Clare went through a battery of tests.  That evening, doctors told Chris and Carla Ronnebaum news they never imagined they would hear.

Clare has a very rare type of brain tumor that only affects about three hundred kids a year in the U.S.  however, it’s the worst of the worst type of brain cancer she could have.  There is no cure and fewer than ten percent of kids survive two years from diagnosis.  DIPG impacts the part of the brain called the pons, which is the message center for several areas of the brain including those that control vital functions, such as breathing and movement.  It typically affects children and it can't be surgically removed because it's not a contained tumor.  without further research, it will remain a fatal diagnosis.

Carla says the doctors actually sat on the floor and cried with them.  There wasn’t much else they could do.

Standard treatment is radiation, and Clare went through her rounds.  But she also qualified for a clinical trial that is testing two oral chemotherapy drugs.

She has to travel to Cincinnati Children’s Hospital for checkups on the treatment.

It’s now nearly a year after diagnosis and Clare is running around like any other three-year-old, wearing her Princess Jasmine costume and serving tea and plastic cupcakes to all of us. The Ronnebaums find hope where they can and the latest came in Clare’s last MRI that showed the tumor hasn’t grown, but it hasn’t shrunk either.

“We never thought we were gonna get here,  and we remember in the days after [diagnosis] her oncologist said if we do nothing she has two months and so this is crazy, we're so lucky,” Carla said. She knows many other families don’t often get the amount of time they’ve now had with Clare.

When they first heard the news they were lost, but then they learned about Prayers From Maria, an organization that raises awareness and funds for pediatric brain cancer research.  Maria McNamara passed away from DIPG in 2007, at age 7, fourteen months after being diagnosed.   Her parents, Ed and Megan started Prayers From Maria- Children’s Glioma Cancer Foundation that is dedicated to raising funds for global research into the causes, prevention, treatments and ultimately a cure for childhood brain cancer.

The Ronnebaums reached out to the McNamaras who became a comfort and guiding force to help them navigate this horrible journey.  When Clare was diagnosed her baby sister was only three months old.  The couple was overwhelmed as any parent would be, but soon learned that options Clare now has weren’t even available when Maria was diagnosed.

Chances are you’ve seen the incredible field of sunflowers along I-90 in Avon. It’s called Maria’s Field of Hope and it’s a place for reflection and action, for parents, families and friends to come and pray, remember or just be amazed by the inspiring yellow sunflowers.  Unfortunately, economic development is encroaching on the field, which the McNamara’s did not own.   They always knew they would have to grow the movement outside of their home suburb.

Wednesday morning they broke ground on a field near Cedar Point that will help continue to spread the seeds of awareness and hopefully donations. The Ronnebaums want to share Clare’s story to help educate and the research she’s part of, they hope will help another family too.

“We really want these limited years that Clare has to mean something, she'll always mean something to us, but maybe even to somebody else, and help someone else as well,” Chris said.

If you would like to make a donation to help support Clare and the Ronnebaum Family, click here.