After years of searching, woman finally gets diagnosis for mystery illness

Sierra Prindle endured years of excruciating pain with no answers, until she came to University Hospitals in Cleveland. 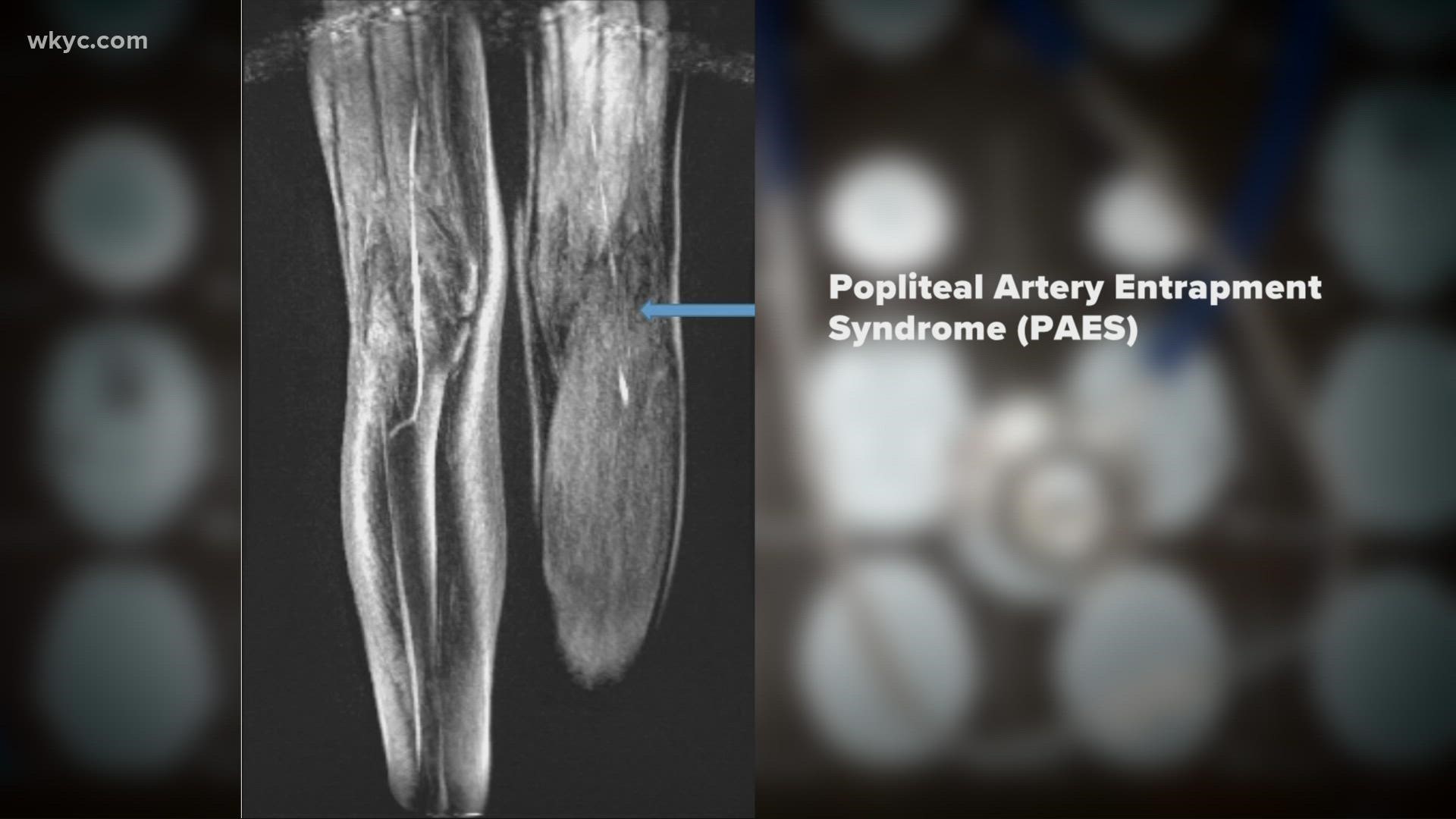 CLEVELAND — Sierra Prindle is a young, active wife and mother of two, but for seven years she dealt with a mystery that debilitated her life.

It started with a spasm and numbing in the back of her left calf. As the days and months went on, the pain worsened.

Despite being a runner, Sierra knew this was no pulled muscle.

"I went through hundreds of tests, and it was the same test over and over," she remembered. "At first, I felt like the first team of doctors I was using were just focusing on one thing."

"My blood pressure was always high, even with medication, so that should have been another factor," Sierra said.

By the time Prindle decided to go to University Hospitals, she could barely walk. Her foot dragged, her toes were purple. UH started looking at her brain and worked down.

"'It could be multiple sclerosis, it could be Parkinson's; let's check for a tumor,'" she recalled doctors saying. "We started there, so a lot of the serious things I knew, thankfully, that's not it."

In January of 2021, Sierra was referred to Dr. Jae Cho, vascular surgeon and Co-Director of the Aortic Center at UH Harrington Heart & Vascular Institute. Timing was critical: It was almost too late to save her leg.

"She was basically totally debilitated," Cho said. "She could not sleep at night."

MRIs, X-rays and dozens of other tests never found the problem, but Cho had a suspicion regarding a potential diagnosis, and ordered a new test done in a very specific way.

He ordered an MRA: Magnetic Resonance Angiography. It shows the blood vessels. At first, everything looked normal, but when she flexed her ankle, the diagnosis became clear: popliteal artery entrapment syndrome (PAES).

"My muscle slipped and trapped my arteries and cut my circulation off from my knee down," Sierra said.

"This is a condition of anatomical anomaly behind the knee area." Cho added.

Popliteal artery entrapment syndrome occurs when the main artery for the lower body is compressed by muscles behind the knee, restricting blood flow through the legs. People with this condition develop pain with walking or during strenuous exercise.

As Cho explains, this is a difficult diagnosis in many centers because most physicians do not expect vascular disease to occur in young patients. Often, as in Prindle's case, a diagnosis is delayed.

There are also many things that can mimic popliteal artery entrapment, like chronic compartment syndrome of the lower extremity, knee joint pain, or other problems with the muscles in this area.

Less than after the diagnosis, Cho performed a popliteal artery bypass. The procedure used Sierra's saphenous vein to move blood from above the affected area to below it, essentially skipping over the place causing pain.

"Before the area of obstruction to the area behind obstruction by creating a bridge is essentially bypass surgery," Cho said.

PAES is a rare condition, and Cho usually operates on five cases a year. But it's often overlooked, and usually presents in younger people as their activity levels intensify.

A few months after surgery, Sierra is doing much better, but the years of little oxygen to her leg will take time to recover. She's still in physical therapy, and expects she'll likely need surgery on her knee in the coming months to fix some torn ligaments.

As for her high blood pressure, it returned to normal as soon as the surgery was complete. She never needed the medication that never worked anyway.

She hopes people learn from her story.

"If you're not getting answers and you're going through the same test over and over again, leave."