You already know this is a very bad flu season. You also know health officials strongly encourage you to get your flu shot, and it's not too late. But one woman from Euclid explains how her flu shot saved her life and not the way you might think. 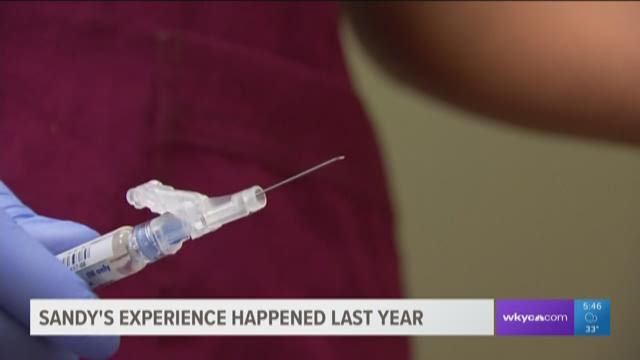 Sandy Callow loves her local Drug Mart. She shops there all the time so it made sense she'd get her flu shot there too.

Kara Bloom, Pharm.D. has been a pharmacist for two years. She's what Drug Mart calls a "floater" and works wherever she's needed. It just so happened she was working at the Euclid location the day Sandy needed her flu shot back in the fall of 2016.

Everything seemed fine until Sandy rolled up her sleeve.

"She was holding the shot and said I want you to see your doctor," Sandy remembers.

Kara told Sandy she had something on her arm and she didn't like the way it looked and she strongly urged Sandy to see her doctor.

Sandy put it off for a few days, but finally she made the call. She wasn't in the office three minutes when the doctor took one look and sent her to a dermatologist. A biopsy revealed Melanoma skin cancer and surgery followed a week later.

"Turned out I had the fastest Melonoma there is and it would have traveled to my brain and killed me," Sandy says.

Both doctors told Sandy that the pharmacist most likely saved her life.

Sandy's mole was the size of a pencil eraser and it was a dark color. The surgery left a three inch scar and needed 25 stitches.

As a pharmacy student, Kara learned about melanoma in school. But she paid attention in that class because her grandfather died from melanoma. It just so happened that the class saved more than Sandy's life.

"After that class, I noticed a spot, I went to my dermatologist and she removed it and it turned out to be melanoma," Kara said.

Pharmacists are known for flagging possible drug interactions but typically finding cancer is not in the job description. Kara hopes other pharmacists become more vigilant.

"Because once it spreads there aren't a lot of options and the options that are available are pretty nasty," Kara said.

Sandy waited until Kara returned to the Euclid Drug Mart to bring her a gift and thank her for saving her life. Kara was grateful to hear the positive end result.

"Just her coming back and telling me what happened and she brought me a knitted angel and I've had that on my mantle ever since," Kara said.

They hope people learn from their story to always get their flu shot, and one other thing.

"If somebody brings something to your attention don't blow it off because it could be something that could save your life," Sandy said.