Your next car won't let you drive drunk

At least that's the goal of engineers now working on new technology that could save thousands of lives each year. But would you want the device in your vehicle? 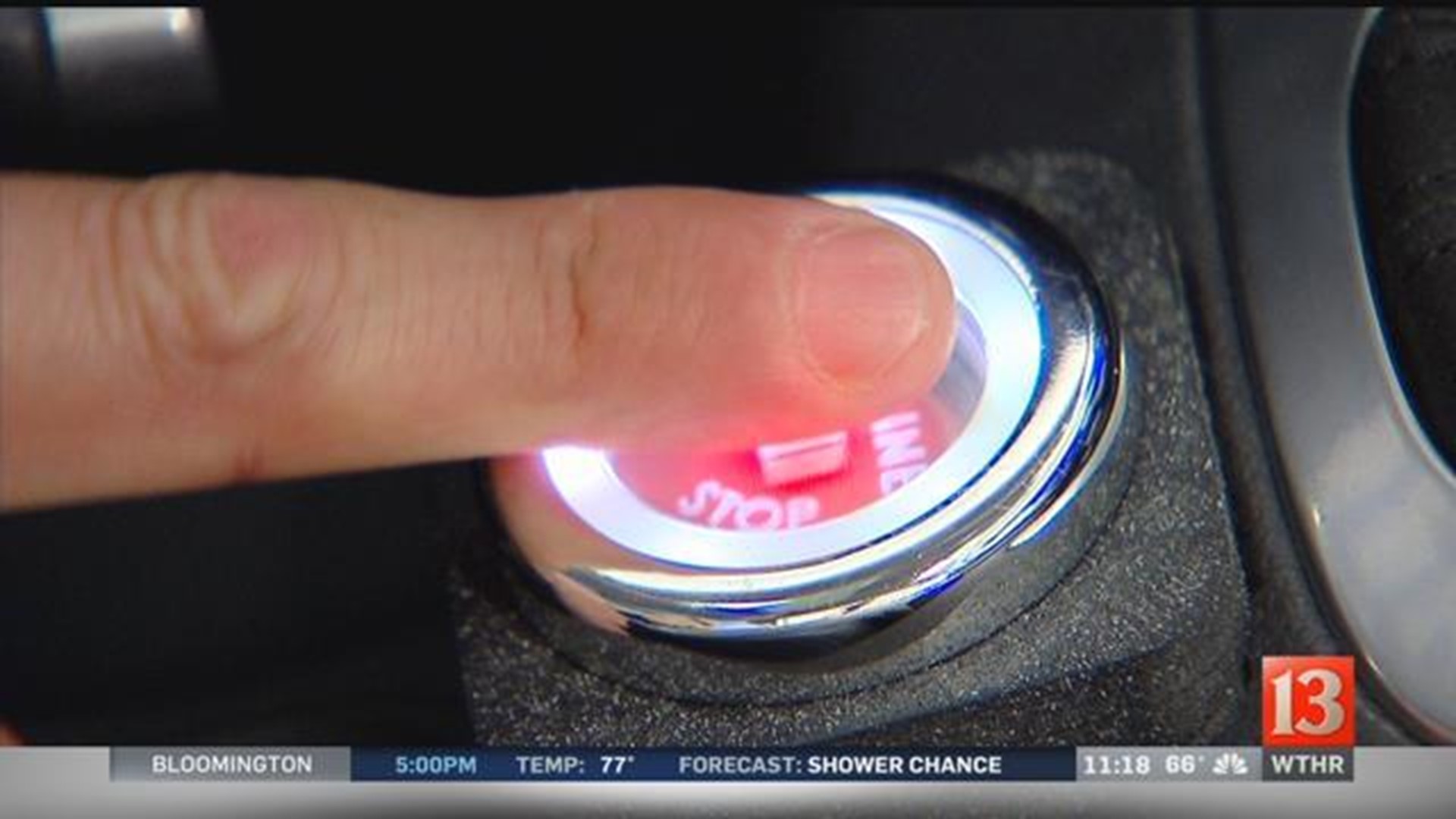 At least that's the goal of engineers now working on new technology that could save thousands of lives each year. But would you want the device in your vehicle? WTHR gained exclusive access to the project's research lab so you can decide for yourself.

INDIANAPOLIS - Sometimes a mother's grief can be summed up in a single word. For Betina Pierson, that word is pickles.

The same jar of pickles has been sitting in her refrigerator for nearly five years.

They are the pickles her 12-year-old daughter, Tierra, was eating the week she was run over and killed by a repeat drunk driver on the south side of Indianapolis in 2010.

Tierra's school pictures. Her clothes. A box full of letters. Pickles. Pierson still holds on to all of them.

"It's all I have left of her," she said as tears rolled down her cheeks. "You never think something like this will happen to you until it does. It's still just so hard. She should be a senior when school starts again."

It's a tragic story that plays out across the country every day. Each year, more than 10,000 Americans die because of drunk driving. More than a quarter million others are injured.

An ambitious government-funded project could dramatically change that. Engineers are now teaching cars how to detect if you are legally drunk – and if you are, your vehicle wouldn't move. Once considered science fiction or a pipe dream, the technology may soon be a reality in millions of cars and trucks.

But will it work – and are consumers ready for it?

The technology is called the Driver Alcohol Detection System for Safety – or DADSS – and it's being developed in a laboratory outside of Boston.

"It's complicated. I don't want to call it rocket science, but it's pretty close," said Bud Zaouk, project manager for the DADSS program. He recently took 13 Investigates on a behind-the-scenes tour of the DADSS research lab at QinetiQ North America, a tech company specializing in defense and transportation programs that federal officials hired to oversee development of an alcohol detection system in vehicles.

The first one captures a driver's breath and pulls it into a sensor, where a beam of infrared light then calculates the driver's precise blood alcohol concentration (BAC). The sensor could be built into a vehicle's dashboard, seat belt or ceiling.

The second technology features a touch-based system integrated into a car's ignition button or gear shift. It uses tiny lasers to shine a beam of light onto your finger, and that special light reads the alcohol level below your skin's surface.

The gadgets are designed to detect whether a driver's BAC is above or below the legal limit of .08.

If a driver's BAC is below the limit, the vehicle would start normally. A high BAC would render the vehicle undriveable. Through the DADSS system, vehicle owners could also select a zero threshold for the BAC if they want the vehicle to be disabled at the slightest sign of drinking, such as instances in which a teenage driver is behind the wheel.

Project engineers say unlike a standard ignition interlock system – which requires a convicted drunk driver to manually blow into a sensor and then wait for test results to start his car – the DADSS system will be designed to be passive, hidden and nearly instantaneous when you get inside your car. They say it will also have built-in features to detect only the driver's BAC – not that of nearby passengers.

"The challenge that we have is to measure alcohol content or blood alcohol concentration very accurately, very precisely and very fast," Zaouk explained. "Our goal is less than half a second – 325 milliseconds to be specific – less than the blink of an eye … to do the measurement, the reading and decision whether this person can move the vehicle or not move the vehicle. It has to be fast. We do not want to inconvenience the driver."

Will you have a choice?

The program has a long list of enthusiastic supporters. Automakers, federal lawmakers, the National Highway Transportation Safety Administration, Mothers Against Drunk Driving, AAA and major insurance companies all back the project.

Program coordinators insist DADSS technology will be an optional piece of safety equipment for consumers who want it. But critics say consumers are being misled, and they worry unproven technology will unfairly impact those who drink responsibly.

"DADSS will simply stop many responsible social drinkers who have a glass of wine with dinner from starting their cars," said Sarah Longwell, managing director of the American Beverage Institute, a lobbying trade group that represents some national chain restaurants.   ABI has been one of the most outspoken opponents of the alcohol sensors, which Longwell believes would become mandated equipment – not optional. She points to a NHTSA fact sheet published several years ago that states, "The goal over time is to equip all passenger vehicles in the United States with the technology."

NHTSA recently released an updated DADSS fact sheet that removes its earlier statement, replacing it with a different explanation. According to the update, "consumers will have the choice whether or not they want to purchase it as a safety option in new vehicles" and "the system will not be mandated." (It is unclear how NHTSA can rule out the possibility that lawmakers might decide to legislate its use in the future.)

In a written statement, ABI also claims the alcohol sensors would have to be set below the .08 BAC legal limit to account for drivers whose BAC does not peak until after they begin driving – an argument Zaouk denies.

ABI declined an interview with WTHR to discuss its DADSS opposition, and the Indiana Restaurant and Lodging Association said it has no comment on the issue.

But other lobbying groups, including the nation's largest trade organizations that represent alcohol producers, stand behind the DADSS project. Many local alcohol distributors support the program, too – even if lawmakers were to mandate driver alcohol detection sensors in every new vehicle.

"I don't know how anyone can be opposed to keeping intoxicated people off the road," said Phil Terry, CEO of Monarch Beverage Company, the largest beer and wine distributor in Indiana. "Is this too much government interference in our lives? I don't think it's an invasion of privacy if you're on a public highway. If you choose to drive on a public road, the balance would have to tip to the public's right to safety. Anything that would keep drunk drivers off the road is a good thing, and we'd be in favor of it."

Supporters also point to a new study that shows the potential impact of equipping vehicles with alcohol sensors.

The University of Michigan Injury Center and UM Transportation Research Institute recently released a report that says the number of annual drunk driving deaths in America would plummet if DADSS ignition interlock technology were installed in all new cars.

"Putting interlock technology in all new vehicles could prevent over 59,000 fatalities over a 15 year period and [prevent] over 1.25 million non-fatal alcohol involved crashes," said Patrick Carter, an emergency room doctor at the UM Injury Center and lead author of the study. "It's very significant. This is the type of critical leap that's needed to solve the problem of alcohol impaired driving."

The study, published in the May issue of the American Journal of Public Health, also estimates the economic impact of the alcohol detection system – which could prevent an estimated 85% of all drunk driving crashes, deaths, injuries and arrests if implemented on a widespread basis – would total approximately $343 billion in savings during that 15 year period. The statistics are based on several assumptions, including the technology would be installed in all new vehicles, the devices would work effectively 100% of the time, and the detection sensor would be set at .02 -- far below the legal limit. Even if the effectiveness level of the alcohol sensors were only 50% and the detection setting were set at .08, researchers say thousands of lives would be saved annually by widespread implementation of DADSS technology.

Whether you support the idea or not, you are already paying for it. The federal government – and your tax dollars – are funding development of the technology. Congress and major automakers have partnered to pledge a combined $45 million to develop a vehicle alcohol detection system – and 13 Investigates has learned the final bill will be much higher.

"It's expensive. You're looking somewhere around $80- to $100-million, who knows?," said Zaouk. "But that's what it takes to develop technology."

The DADSS laboratory in Waltham, Mass., is full of that technology created specifically to complete the project.

Forty custom-made lasers – each smaller than a grain of rice – are inside every touch-based alcohol sensor.

And engineers developed a mechanical lung to test their emerging equipment. The Wet Gas Breath Alcohol Simulator precisely mixes gasses found in human breath with varying levels of humidity and ethanol to mechanically simulate a human exhaling. Researchers can set the machine to any BAC they desire,  meaning they can quickly test their DADSS devices without the messy, complicated and time-consuming process of first getting a human test subject drunk.

The eventual cost to consumers who want a DADSS system will be an estimated $300 to $500 added to the cost of a new vehicle.

Some studies suggest consumers would quickly recover that cost in lower insurance premiums and discounts, as well as lower repair costs and medical bills associated with drunk driving.

"Just a matter of time"

Engineers have now been working on the DADSS project for more than seven years, focusing their current efforts on how to make the alcohol detection systems smaller and more accurate.

The latest accomplishment: a prototype vehicle that incorporates both the breath-based and touch-based technology.

With a large sensor protruding down from the ceiling of the car and an even larger box of circuits and wires sitting alongside the center console, the prototype is not nearly as seamless as the vision engineers hold for the final product. Those elements will eventually be integrated into the vehicle and hidden from consumers. But project leaders demonstrated for WTHR that the installed alcohol sensors do work -- just the latest sign that the project is moving full steam ahead.

Zaouk hopes to begin road testing a DADSS-equipped vehicle sometime next year, although he says a commercially-viable version likely won't be ready before 2020.

"It's no longer a question of ‘Can we do this?'" he said. "We all know we can do it. It's just a matter of time and effort to get it into the vehicle. I have three little kids. For me, personally, I want to see this system in vehicles before my kids start driving."

Betina Pierson wishes it has been developed years ago.

"When innocent people die every single day because of somebody else's bad decision, something needs to be done," she said. "If you're not drinking and trying to drive, how is it affecting you, really? It's probably going to save you and someone you love. It's not going to have any negative impact whatsoever on a person's life if they're not trying to break the law. People have to remember, it didn't have to be my daughter than was killed that night. It could have been anybody's child."

"We're doing all this to prevent something like that from happening again," Zaouk agreed. "There's still 10,000 people dying on the roads today, and we have to do something to try to prevent that. This is the best opportunity we have today to do it. This will be the seat belt of our generation."

What do you think? Would you like to have an alcohol detection sensor in your car? Vote now in our poll to the right.