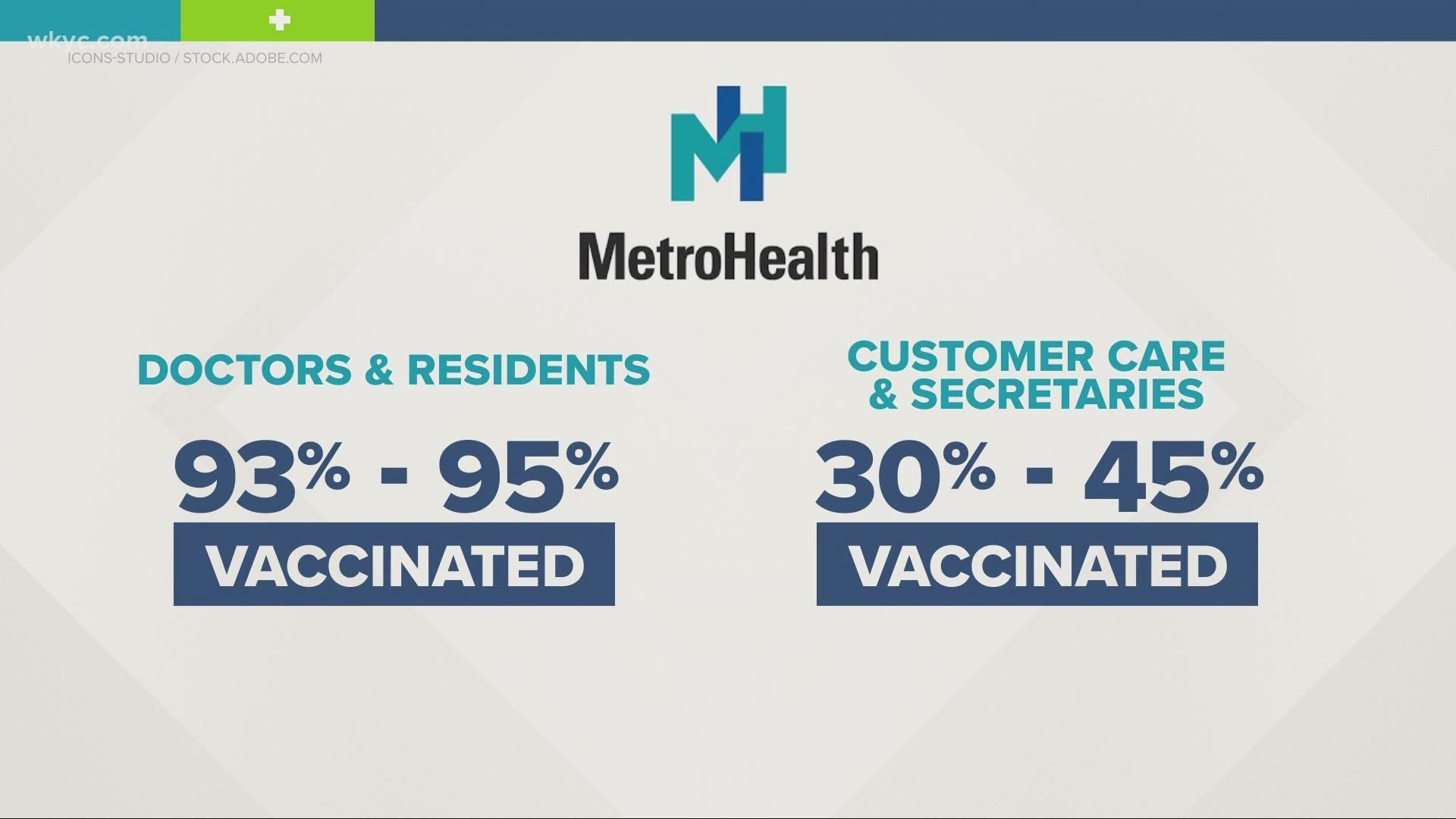 CLEVELAND — Health care workers across Northeast Ohio are choosing not to get COVID-19 vaccinations, according to data released to 3News Investigates.

The numbers come at a time when apathy toward the vaccine is emerging, as more and more Americans are balking after an initial surge. Health care workers were moved to the front of the line when the first vaccines were given in Ohio during the month of December, but despite the efforts, many such employees remain unprotected from the virus.

"We are still in the process of vaccinating, and many are still going through the process," a Cleveland Clinic spokesperson tells 3News.

MetroHealth officials say the vaccines were taken by nearly all of its doctors and residents, 93-95%. The numbers drop dramatically for customer care employees and secretaries, as just 30-45% had taken the vaccine.

"As you go down in education levels amongst the staff, the vaccination rates drop off as well," MetroHealth Dr. Brook Watts said.

This data of areas hospitals is on par with national trends, too. According to a recent survey of 1,300 healthcare workers, less than half had been vaccinated.

About 40% of Americans have had at least one shot of the vaccine and one in four are fully vaccinated, according to the Centers for Disease Control and Prevention. While explanations for hesitancy varied, most often health care workers said safety and the speed of vaccine development were the reasons for their refusal.

The recent pause of the Johnson & Johnson vaccine due to six cases of people developing blood clots has contributed to the hesitancy, all despite over 7.2 million people receiving that shot without serious complications.

"I am more scared of the virus than I am the vaccine," Watts said.

Watts believes it's important to understand the difference between having vaccine hesitancy and being anti-vaccine. She's working to improve Metro's percentage by delivering vaccine information to her staff in a more empathetic way.

"Everybody has the right to feel comfortable," she said. "I think this is a moment where we need to take time to answer those questions and make sure people do feel comfortable with the decision."

While University Hospitals refused to disclose their employee vaccination rates, a spokesperson told 3News Investigates that there has been "broad acceptance of the vaccine among our caregivers."

"We continue to report all COVID-related data to the Ohio Department of Health as we have throughout the pandemic," the statement said. "We continue to provide information to help people make informed decisions about the safety of the vaccines."

RELATED: Ohio health officials fear pause on J&J vaccine will only increase hesitancy in the state