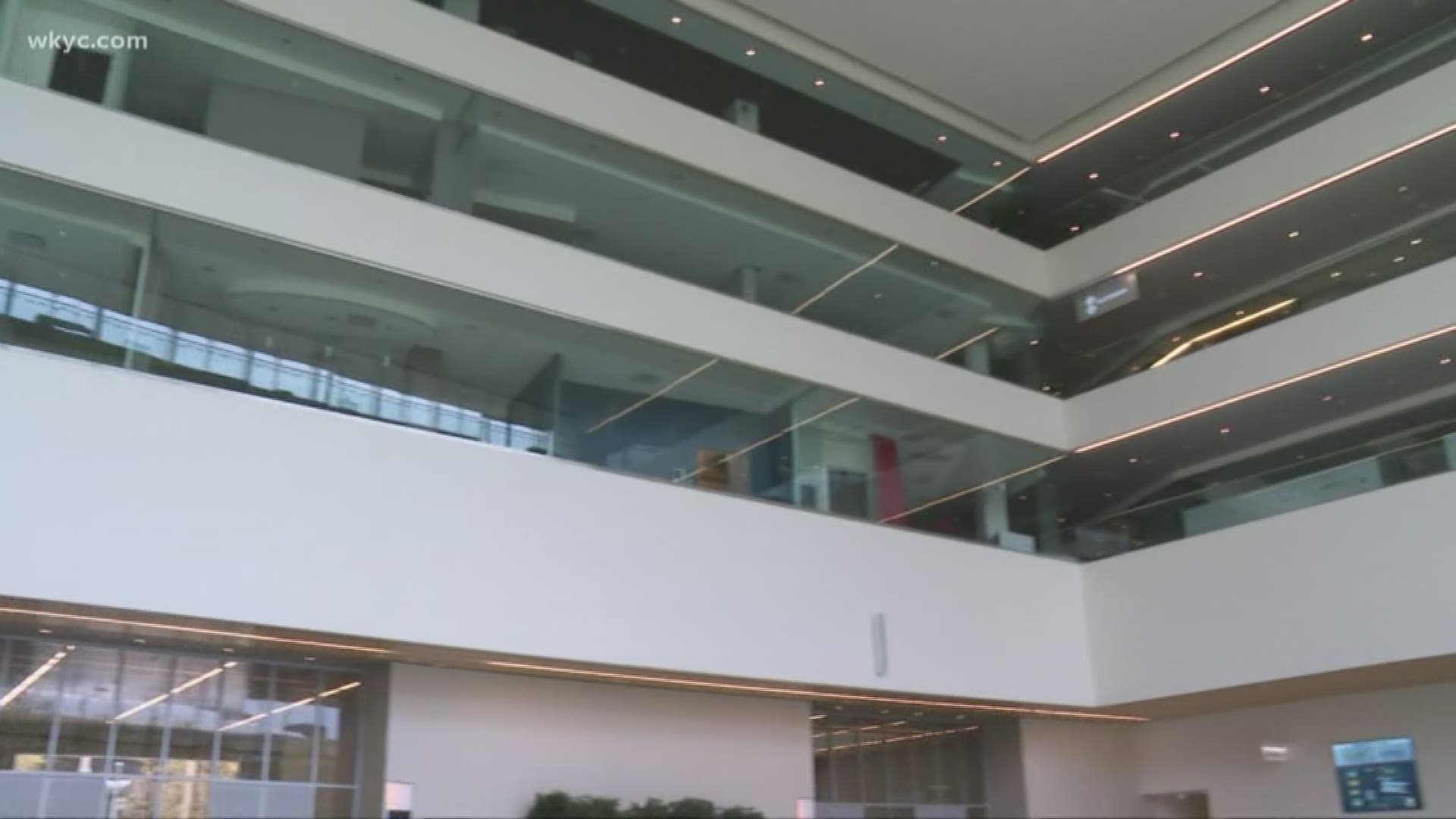 CLEVELAND — The Cuyahoga County Convention Facilities Development Corporation, the public board that oversees the Global Center for Health Innovation and the Huntington Convention Center on taxpayers’ behalf, flagged questionable expenses submitted by BioEnterprise, the nonprofit company hired to manage the center.

In a June memo to its board members, the CCCFDC Executive Director George A. Hillow said BioEnterprise said he didn't think BioEnterprise should be reimbursed for liquor, a pricey Las Vegas meal and $110 bottles of wine, among other things.

The memo also questioned travel expenses, including a plane ticket for the son of a BioEnterprise employee, a large liquor purchases made at a downtown store for a March Madness happy hour.

“I have sought opinions from the County Internal Auditor, Corey Swaisgood, CCCFDC's external CPA, Dan Gibel and State Auditor's Office and they have concurred that there is not enough information provided to justify reimbursement of some of these expenditures,” Hillow wrote. “I am very cautious in my dealings with Bio Enterprise because of the organization’s history of submitting inappropriate items for reimbursement.”

It's unclear if the expenses were reimbursed. Hillow declined to comment. BioEnterprise has not responded to a request for comment.

Earlier this week, 3News first reported that the Cuyahoga County corruption investigators sent a subpoena to CCCFDC and BioEnterprise seeking expenses records and other documents related to BioEnterprise.

Both the BioEnterprise and CCFDC have said they are cooperating with investigators.

BioEnterprise, tapped two years ago to find tenants for space once known as MedMart, announced earlier this month it will not continue as manager. And the CCFDC said it planned to consider alternative uses for the facility, including using it Global Center as additional convention space.

BioEnterprise said in an earlier statement to 3News that its decision to leave the Global Center was not related to the subpoena.

Read the text of the letter below:

As you probably are aware, my staff has been in the process of reviewing Bio Enterprises expense reimbursements for the services provided to the Global Center. Last Thursday, I was asked to meet with Aram Nerpouni, of Bio Enterprise, Matt Carroll, Matt McBride of Bio Enterprise, and Pat Sweeney of Thompson Hine. The purpose of the meeting was to review the various expenses and determine whether they complied with the agreement. Based on my professional experience, there were several expenses that I was not comfortable approving. Matt Carroll suggested that the board review these expenses.

CCCFDC has been criticized for taking too long to approve reimbursable expenses and accused of being draconian. The statement was made that CCCFDC is exposed to a potential lawsuit from Bio Enterprise. These statements were made in the presence of Bio Enterprise.

Attached are copies of receipts that were submitted and could not be justified. Many charges and items were not preapproved and did not comply with the contract. A few examples of disallowed expenses are listed below.

I have sought opinions from the County Internal Auditor, Corey Swaisgood, CCCFDC's external CPA, Dan Gibel and State Auditor's Office and they have concurred that there is not enough information provided to justify reimbursement of some of these expenditures.

I am very cautious in my dealings with Bio Enterprise because of the organization’s history of submitting inappropriate items for reimbursement. CCCFDC, through its agent SMG, entered initially into a contract with Bio Enterprise to obtain leases for the Global Center, from July 1, 2014, through June 30, 2015. I started as the Executive Director of CCCFDC on August 8, 2015. The contract provided that Bio Enterprise would receive $7500 per lease negotiated, it would commit it’s employee David Ricco to the assignment. The agreement further provided that CCCFDC would advance $100 per hour for David Ricco’s time and the advance amounts would be subtracted from any commissions earned. In the event the advance was more than the commission, there would be no obligation for Bio Enterprise to repay the advance. Over this timeframe CCCFDC paid Bio Enterprise $150,000; no leases were delivered.

Bio Enterprise negotiated an extension to the agreement in July 2015 and received another $12,000 for that month with still no leases delivered. When I started, I wanted to review all contractual agreements. Upon reviewing this agreement, I immediately stopped payments. Bio Enterprise continued to bill CCCFDC through December 2016 for Mr. Ricco's services. Mr. Ricco took a job with the law firm of Walter Haverfield as a partner effective October 2016 as listed in his LinkedIn profile. Bio Enterprise continued to invoice CCCFDC for $76,000 through December 31, 2016, for Mr. Ricco’s services. Neither Bio Enterprise or Mr. Ricco were licensed to provide real estate services.

Similarly, Bio Enterprise billed CCCFDC for an employee, Annette Ballou, at an annual rate of $187,500 to work 30 hours per week. Upon reviewing the contract, I asked to see the accounting of the hours and work performed; Bio Enterprise did not produce these documents. CCCFDC received a demand letter for payment of $90,000 from Calfee, Halter & Griswold for Ms. Annette Ballou. These instances, as well as several others, have made me very careful to verify and question BioEnterprise’s submissions for reimbursement.

I want the board to understand my position based upon my professional experience on why I am very cautious about approving these expenses. Our staff has spent an inordinate amount of time reviewing these documents.