That takedown would lead to the first sitting mafia boss to become a government witness, and that confession would cause a ripple effect on organized crime. 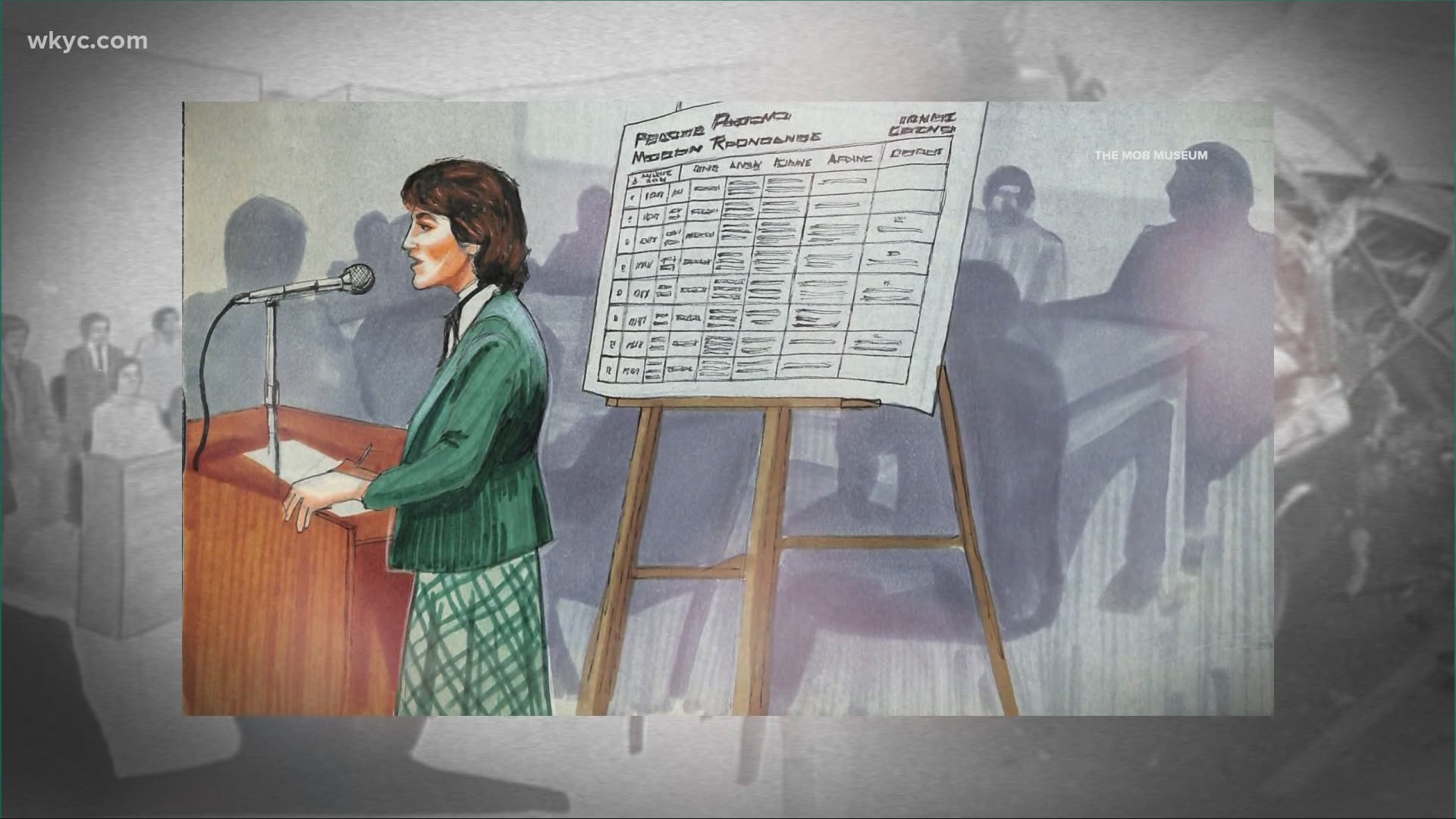 CLEVELAND — Over the course of three Thursdays, 3News Investigates takes you back in time as we look into Cleveland's underworld in the 1970s. Along the way, you'll hear stories never before told from those who lived it.

This is "Bomb City U.S.A.," a true story about organized crime, murder and a fight for control that left everyone dead or behind bars. In our third and final installment, we talk to the female prosecutor who went toe-to-toe with one of the biggest figures in the Cleveland mafia.

He was once considered one of the untouchables, heir to Cleveland's crime family, La Cosa Nostra. A cold-blooded killer at age 16, when he avenged his father's death. His family led the city’s underworld for decades.

But on April 15, 1988, Angelo Lonardo did the unthinkable: He became a rat, testifying before a U.S. Senate committee.

"I have been in the mafia most of my adult life," the 77-year-old gangster told the committee. "I have been aware of it ever since I was a child in Cleveland."

Lonardo’s journey to the Senate hearing was the culmination of years of investigations and prosecutions. In an ironic twist, it was a young assistant U.S. attorney who defeated Lonardo inside a Cleveland courtroom.

Donna Congeni Fitzsimmons, a carpenter's daughter and one of the few female prosecutors at that time, remembers the smirks as she took on the patriarchy. Her adversaries dubbed her the "naïve lawyerette."

"They were not that receptive to a woman becoming the lead prosecutor on a case like this. but it really worked to their detriment," Fitzsimmons said in a recent interview.

The courtroom battle came in 1982, years after the FBI chipped away at lower level organized crime figures. Those not convicted were likely killed in a spate of bombings that shook Cleveland in the 1970s.

}It was thought we would never really successfully prosecute these cases, because there was no evidence of who did what," Fitzsimmons remembered.

This trial would be different. Fitzsimmons had a star witness, a mobster-turned-informant named Carmen Zagaria. For the first time, federal prosecutors could draw a straight line upward to Lonardo.

The verdict was sweeping: Not only was Lonardo convicted, but so were legendary mobsters like Joseph Gallo, Kevin McTaggart, Hartmut Graewe and his brother, Frederick Graewe. A throng of reporters greeted Fitzsimmons as she left the federal courthouse in downtown Cleveland.

"We're very pleased by the results," she said at the time. "We had a great jury. …We think the result was justified by the evidence."

Nearly 40 years later, Fitzsimmons is now a long-serving judge of the Rocky River Municipal Court. She still credits her law enforcement partners for the win, which essentially ended the family crime operations in Cleveland.

"We worked tirelessly," she said. "We just never stopped because we were so motivated by knowing we had a chance to do something really important."

Those verdicts had far-reaching implications. Sitting a jail cell and facing a sentence that would mean he'd die behind bars, Lonardo was ready to cut a deal. FBI agent Bob Friedrick was ready to play.

"I gave him my business card and I said, 'If you ever need a favor, give me a call and we can work something out for you,'" Friedrick recalled. "He called me a week later ... [and] said, 'I want to do business with you guys.'"

That "business" led to that U.S. Senate committee appearance by Lonardo. It marked the first time a sitting mafia boss would break the golden rule of organized crime and testify against fellow mobsters. Lonardo's body and face were shielded as he testified.

"My name is Angelo Lonardo," he told the senators. "I am 77 years old, and I am a member of La Cosa Nostra. I am the former underboss of the Cleveland organized crime family."

Lonardo's testimony would play a crucial role in convictions against the bosses of each of New York City's five crime families. The successful results of the famous "Commission Trial" would also propel a young New York federal prosecutor named Rudolph Giuliani to national acclaim.

"Today, you don't have to kill to be a member; you just prove yourself worthy by keeping your mouth shut, or by being a 'stand up guy,'" Lonardo told the committee. "However, if you are called upon to kill someone, you have to be prepared to do it."

After his appearance, Lonardo avoided prison life and instead spent years living in the federal witness protection program before emerging again in his early 90s. He died in 2006 at the age of 95, and is buried in Cleveland's Calvary Cemetery.

Check out our new podcast:

If you liked this story, check out our new podcast.

WKYC Studios and 3News Investigates is thrilled to announce the launch of our podcast: Bomb City U.S.A.

It's a true story about organized crime, murder and a fight for control that left everyone dead or behind bars.

You can also watch Leon Bibb's interview with Donna Congeni Fitzsimmons below: