The lawsuit claims Gary Brack "was punished for his protected speech" after he testified to the County Council regarding his concerns about jail conditions and the lack of nurses at the jail.

Gary Brack, a former MetroHealth nurse whose testimony helped uncover the ongoing scandal at the Cuyahoga County Jail, has filed a lawsuit accusing county officials of a "culture of retaliation."

Brack and his attorneys from the Chandra law firm held a press conference to officially announce the lawsuit on Wednesday. Among the defendants are County Executive Armond Budish, former Jail Director Ken Mills, and the MetroHealth Medical System.

The lawsuit claims Brack "was punished for his protected speech" after he testified to the County Council regarding his concerns about jail conditions and the lack of nurses at the jail. Brack was an employee at Metro, which is responsible for medical care at the jail. However, he was placed on leave in May and later fired, and he claims his ouster was on the orders of Budish, who was "outraged" by the harsh testimony. 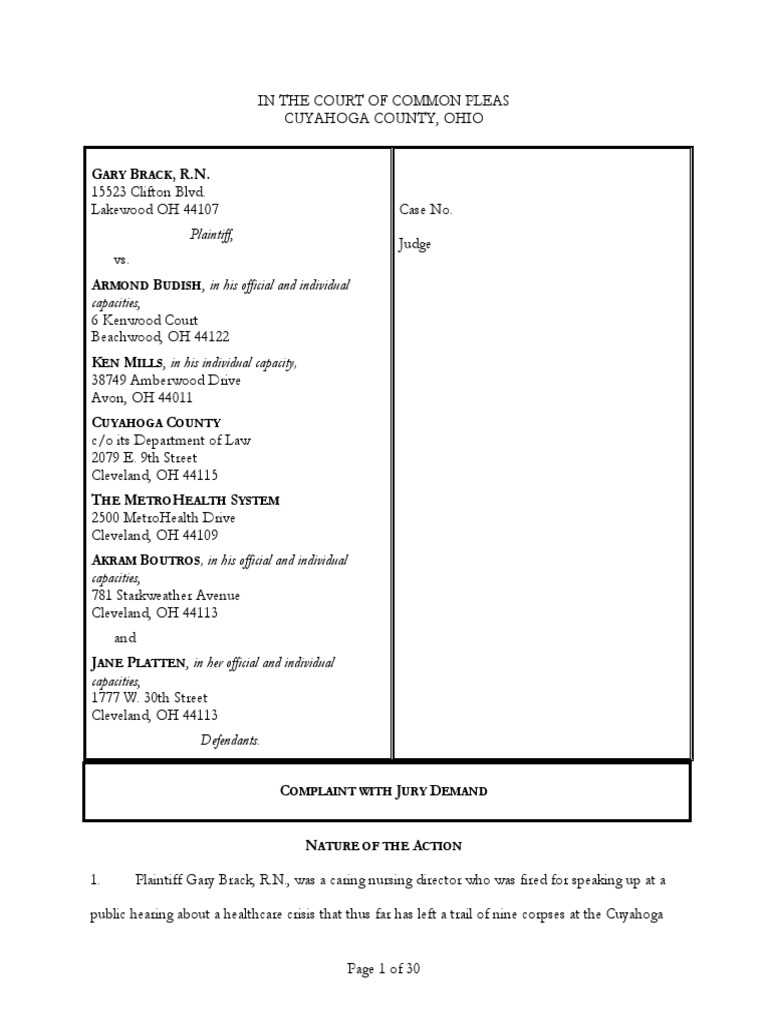 The suit also harshly criticizes Mills, who abruptly resigned last November just prior to a U.S. Marshals report that ripped the jail for its "inhumane" conditions. The suit claims Mills "perjured himself" to the council and repeatedly ignored safety concerns. According to Brack, he repeatedly "obstructed nurse hiring at the jail, understaffed the officers who protect them, and parachuted into monthly meetings about MetroHealth's healthcare contract..." This was allegedly done with the support of Budish, who wanted to "cut costs at any cost and conceal the deadly consequences from the public."

Following his initial testimony in May, Brack spoke to WKYC's Lynna Lai, calling jail conditions "dangerous" and that there were often only three registered nurses on staff for more than 2,000 inmates.

"We have paraplegics, quadriplegics in the jail. I have no staff to turn these inmates over every couple of hours to prevent bedsores," Brack said at the time. "We have inmates housed in the medical unit, housed in the infirmary areas, sleeping on floors because there's not enough beds available."

The county initially denied Brack's claims, but several investigations and inquiries later supported Brack's version of events. In addition, nine inmates have died at the jail since the start of 2018.

Mills was later indicted for lying to the council about his role in blocking nursing appointments. Multiple other jail officials have also been accused of charges ranging from tampering with evidence to assaulting inmates.