A Geauga County millionaire---who comes from royalty---has been indicted on charges he illegally received food stamps and medicaid assistance. 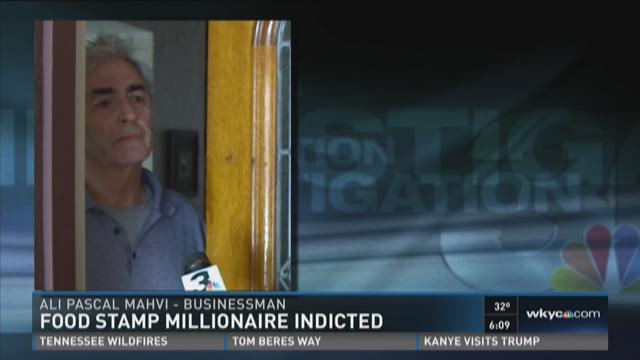 A Geauga County millionaire---who comes from royalty---has been indicted on charges he illegally received food stamps and medicaid assistance.

Ali Pascal Mahvi is facing four felony counts which could put him behind bars for more than four years if convicted. The case involving Mahvi was first exposed by the Investigator Tom Meyer in September.

"I absolutely believe he should serve time behind bars," said James Flaiz, the Geauga County Prosecutor.

Mahvi, who is the son of an Iranian prince, estimates his worth at about $120 million. His $800,000 home features five bedrooms and five bathrooms, an in-ground swimming pool, and stable with horses.

Mahvi, who says he owns 70 percent of a resort in St. Lucia, says he's played by the rules. He says he lives off loans from friends which he argues are not considered income for food stamp eligibility.

"Through our investigation, we found they were actual investments and were not loans," he said. "There were actually hundreds of thousands of dollars of what he was calling loans that we discovered he never declared."

Mahvi says the criminal case shut down his efforts to sell airplane parts to Iran.

"I worked really hard to get Iran to buy Boeing and I lost that because of this, these allegations," Mahvi said.

Mahvi denies having a $4 million Swiss bank account. He says that account had belonged to his father. Flaiz says his staff is still combing through Mahvi's 14 bank accounts.

"Literally millions of dollars involved in what was going in and out of his accounts that made this investigation especially difficult," Flaiz said.

Mahvi says he and his lawyer will fight the charges starting next month when Mahvi is scheduled to appear in court for his arraignment.