'When I'm free, my mother is not going to be there to hug me' | Family, friends hope for return to court for men convicted of '98 murder

The Lucas County Prosecutor's Office now has until Sept. 30 to respond to a motion based on 11 Investigates' Guilty without Proof investigation. 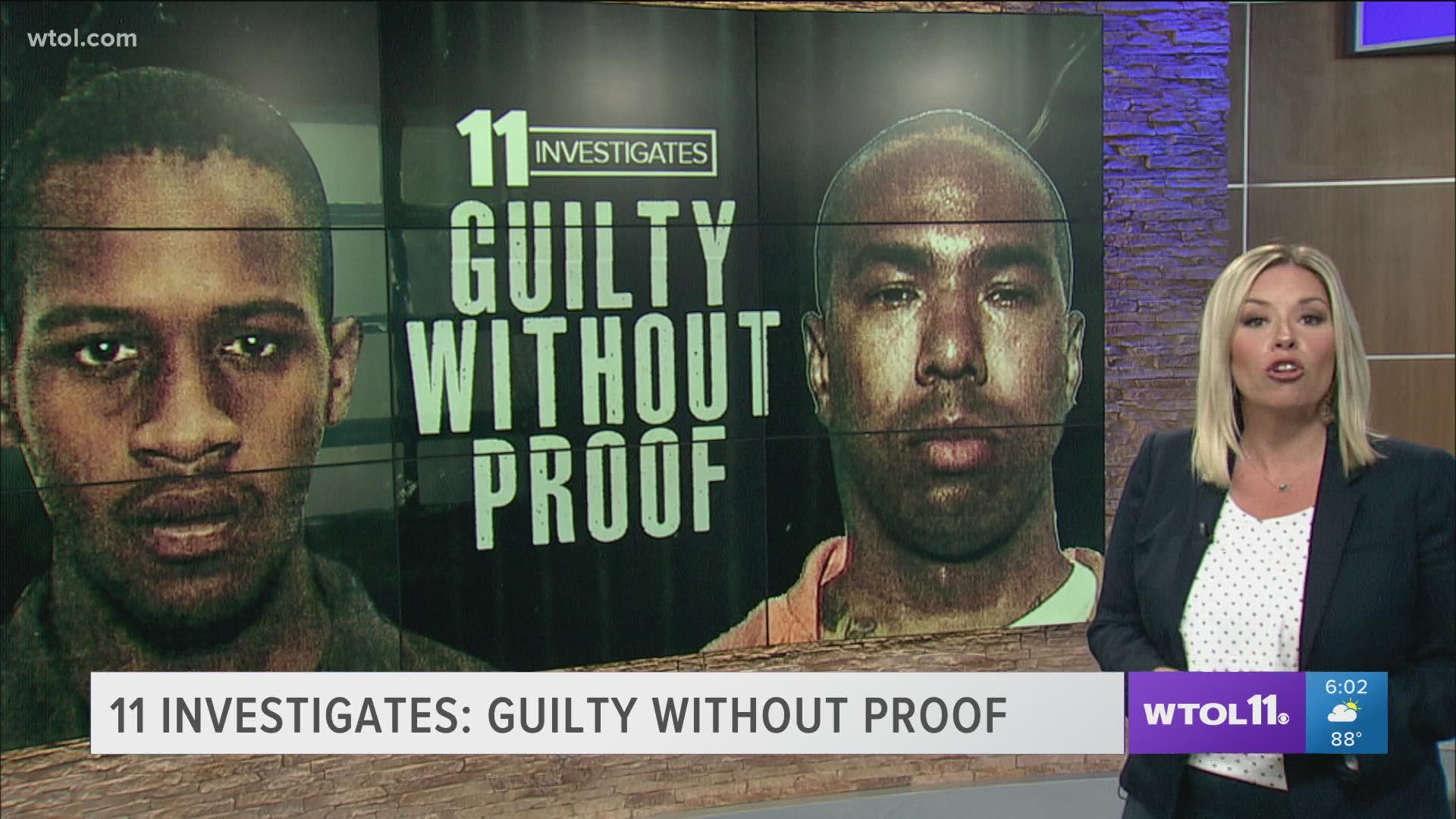 "This case" is the June 15 murder of 13-year-old Maurice Purifie, who died in a hail of bullets in the center of Horace Street in central Toledo. Willis and lifelong friend Wayne Braddy were convicted in January 2020, after co-defendant Travis Slaughter testified against them.

Willis screaming at the top of his lungs, "For something I didn't do," as he was led away following his conviction is an image seared into the memories of those who followed the case.

Credit: WTOL
Karl Willis scoffs at what the state says was his motive - $200 to kill Maurice Purifie. "What could a 13-year-old even be involved with that you would want to do something to him for $200? That's a child, man," Willis says. “You’ve got to have some kind of demonic spirit if you want to go hurt a child. I had nephews and nieces that age.”

Credit: WTOL
Wayne Braddy said he was in shock when he heard Travis Slaughter speaking against him on the stand. "I just kept shaking my head when he was on the stand. It was something like when you get ringing in your ears and it takes awhile to go away. Hearing him talk was just like a ringing in my ears. … It was just pain, man, just pain. That stuff hurt my heart."

Braddy and Willis have maintained their innocence since being arrested by police after Slaughter named them in a six-hour interrogation by police. Their story was investigated by the 11 Investigates team in 2019's "Guilty without Proof."

That story later resulted in Slaughter and fellow state witness Shondrea Rayford coming forward to say that the men were innocent. Slaughter, who received a deal from the state for his testimony, claimed that his story was coerced - and coached - by detectives and prosecutors. At this point, there is no one claiming that Braddy and Willis had anything to do with the killing.

The investigation formed the basis of a new appeal by the men that was filed last year. On Aug. 12, Lucas County Common Pleas Judge Gary Cook granted their motion for leave to seek a new trial.

Lucas County Julia Bates' office originally had until Sept. 2 to respond to the motion. However, after filing an extension, her office now has until Sept. 30 to respond.

She could object, join the motion, possibly not even respond. In the filing last year, her office received extensions.

If the state responds, the men's attorney, Jennifer Bergeron of the Ohio Innocence Project, would be able to respond before Judge Cook likely schedules a hearing on the motion for a new trial.

It was a welcome initial decision for the men and Bergeron.

"We are pleased that the court granted our motion and will now consider Mr. Braddy and Mr. Willis' request for a new trial," Bergeron said. "Both men have maintained their innocence throughout this case, and put simply, there is no evidence that supports their convictions. They look forward to achieving justice."

Credit: WTOL
“The experts who have looked at conviction integrity units are the ones who have decided that the best practice is to have someone new look at the case when someone comes forward with legitimate claims of actual innocence,” says Jennifer Bergeron, the deputy director of the Ohio Innocence Project and also lead counsel for Braddy and Willis during their appeals.

The prosecutor's office has not responded to a request for comment about the judge's decision.

In a 2019 story, Maurice's brother, Troy, said that he now believes the men are innocent. Other members of the family continue to believe that the men were behind Maurice's killing.

Credit: Purifie Family
Maurice Purifie, his life tragically cut short at age 13, was described by his family as the heart of the family. Maurice was a basketball player, already taller than his brothers. He was a straight-A student. He was in church revival the week of the killing. He had a kind heart, easy smile, and was always there for his friends.

But family and many members of the community continue to stand behind Braddy and Willis.

Childhood friend Harold Harris, who goes by the name of Clyde Green on the 419 Grind radio program, recently returned to Savage Park, off of Nebraska Avenue. It was a spot that he and Braddy and Willis would hang out as children.

"We'd come up to City Park before it was changed to Savage Park. We'd meet up to play football in schoolyard," Green said, pointing to a distant lot. "It was a shock to the neighborhood. I never knew Travis Slaughter, or his side. But it was a big shock to me to see Wayne and Karl get into a situation like that."

Killers are not how Harold Harris describes his old friends. He said none of it makes any sense.

But that has never happened. For almost his entire interview, Slaughter said he knew nothing about his crime. Rayford, who he called his girlfriend, allegedly called CrimeStoppers to say that Slaughter admitted to the crime. She later told 11 Investigates that she did not make that call, that it was a friend who gave her name.

In court, Slaughter told the jury that he offered to pay Braddy and Willis to rough up Slaughter, who he said owed him money. He later admitted that he did not give them any money.

"I just couldn't see Wayne and Karl messing with a little dude like that. Maybe if Mr. Purifie was 17 or 18, it'd be a different story," Harris said. "You don't really get no stripes for being 18 and messing with a little 13-year-old. You don't get no positive points in the hood for that. You are really shunned upon."

Slaughter told 11 Investigates - on camera - in October 2019, that he and the men were like brothers but they had a falling out over clothes he stole from Willis. At one point, he admitted that he went to Willis' home with a gun in an attempt to kill him. He told us that when he had the chance to get revenge by implicating them in the crime that he did.

He later repeated the same story in an affidavit filed with the men's latest appeal.

The Willis family pastor, Daniel Cunningham, said he hopes that members of Maurice's family can look past their pain and recognize that strong doubt exists.

"According to the word of God, we must forgive and love each other. I know that's hard if you feel someone has wronged you. But if the evidence is not there, it's not there," he said.

Harris said this is just another example as to why few in the black community trust the justice system.

"We are told to put our trust in it, but a lot of times we see the justice system fail us."

The evidence against Braddy and Willis was so scant that lead detective Bart Beavers sent a letter to Lucas County Prosecutor Julia Bates after the trial, commending her office for the "unthinkable" conviction.

Credit: WTOL
A letter from Detective Bart Beavers to Prosecutor Julia Bates commends her team for accomplishing the "unthinkable" in convicting Braddy and Willis.

Two separate interrogation experts - one to the court and another who listened to the interviews for WTOL - agreed that Slaughter appeared to be coerced.

After jury foreman Jon Crye was presented with the evidence in our 2019 investigation he said that he believed Braddy and Willis deserved a new trial. He repeated in a recent email to me that he is willing to do what he can to help them get a new trial and said: "I really wish I knew then what I know now and am sorry that things turned out how they did."

Credit: WTOL
Jon Crye was the jury foreman in the case that saw Karl Willis and Wayne Braddy sent to prison for the murder of 13-year-old Maurice Purifie.

Family members and friends recently gathered to discuss their hopes for the future.

"I feel angry at the system, but I feel hopeful that one day this will come to pass and he'll be free," Karla Johnson, Willis' sister, said.

Willis' fiancee, Charmaine, also expressed hope: "I believe that by God's will, Julia Bates will come to the realization that there was a mistake on this case."

In a recent 30-minute phone conversation, Braddy expressed support and peace for Maurice's family and love for Slaughter, who he called his brother and who he said he has forgiven. But he mourned all that he has lost, including multiple family members.

He said he is mostly at peace but is frustrated that he continues to remain in prison.

Credit: WTOL
Karl Willis and Wayne Braddy were convicted in early 2000 of killing Maurice Purifie on June 15, 1998. The state's key witness says he lied to police.

Willis has always maintained that he was baby-sitting with his girlfriend, and suffering with allergies and his asthma, at the time of the killing. He said he was not with Braddy or Slaughter.