Former workers and clients are complaining about sales tactics used by Service Corporation International at their Cleveland-area Dignity funeral homes. 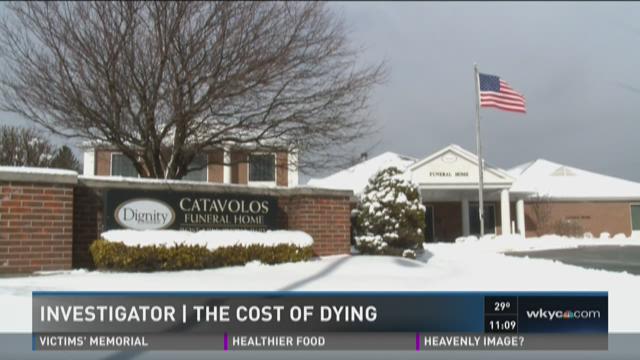 CLEVELAND -- It's a day Mike Evans will never forget.

That morning, his grandmother died. That evening, his wife, Beth, died. All this, just weeks after his father passed away.

"Three people in one month," said Evans. "I couldn't even work. It was horrible."

Evans, 57, has that January 2014 date tattooed on his wrist, a daily reminder of what he lost that day. To Evans, it was a harsh lesson in heartbreak.

Since then, it's also been a lesson in the business of funeral homes and the nation's biggest, Service Corporation International.

Like other SCI customers WKYC spoke with, Evans complains of high-pressure sale tactics and follow-up phone calls in which a sales person is seeking pre-arranged funeral services or referrals for other potential business.

Evans says the calls have gone on for years.

"I just want them to leave me alone. Seriously," said Evans.

Funeral homes are part of our Cleveland neighborhoods. Family names like Corrigan, Craciun and Berry have been around for decades, dotting the landscape.

And while those names remain intact, the owners have been replaced by SCI, the nation's largest funeral home chain, and its brand name Dignity.

Houston-based SCI owns more than 2,000 funeral homes, crematories and cemeteries across the nation. They employ more than 24,000 workers.

Lindsey Cannon worked for an SCI-owned funeral home in the Cleveland area. She said the company pressured workers to up-sell funeral packages that included catering services marked up 25 percent.

"Totally. Absolutely, I felt terrible about selling that. I didn't want to," said Cannon.

"[I] felt a little bit like a shyster," said Cannon. "If we didn't sell enough of these packages, there would be meetings. We were supposed to basically sell everybody a package and catering."

We surveyed some local funeral homes for prices and found SCI to be about 43 percent higher for the same basic services performed in the same neighborhood.

One SCI funeral charged $5,945 for a basic service. A family-owned competitor nearby charged $4,175 for the same services.

An SCI spokeswoman declined to make anyone available for an interview and several SCI funeral homes we contacted also declined comment.

SCI released a statement that said:

"While we are not aware of any specific allegation or any evidence supporting these statements, we would certainly investigate if we had reason to believe any of these claims were true.

SCI holds its employees to the highest standards of fair and ethical dealings. Our customers’ interests come first. We instruct our employees to inform them clearly about our services, merchandise and prices, recognizing their freedom of choice. We do not condone the use of high-pressure tactics that encourage customers in any way to enter into commitments that are beyond their wishes.Our funeral homes are branded as Dignity Memorial providers, which communicates to consumers the consistency and quality of service and products we offer. Across the Dignity Memorial network, the family names of our locations are proudly maintained to recognize and reinforce for consumers the heritage of our funeral homes within the community."

Joe Dolecki, a life-long salesman, moved to the Cleveland area and briefly worked with SCI.

"Don't take no for an answer. Close the deal," he recalled. "If you're strictly after the numbers. Then everything you preach about taking care of families is a lie."

SCI made national news in 2014 when it reached an $80 million settlement in California to settle a class-action lawsuit for overselling cemetery space. Families alleged that cemetery officials discarded or lost human remains to make room for new graves.

Linda Lepke worked as an office manager at Rose Hill Cemetery in Fairlawn, which is owned by SCI. She said she witnessed the meetings in which sales were discussed. She said because SCI is publicly traded, there's an inherent need to produce profits.

Consumers are urged to call funeral homes for prices before signing any contract. According to the Federal Trade Commission, which oversees the industry, funeral homes are required by law to provide prices over the phone or in person.