She has also been the target of online social media scorn from cancer survivors and others who have supported her. 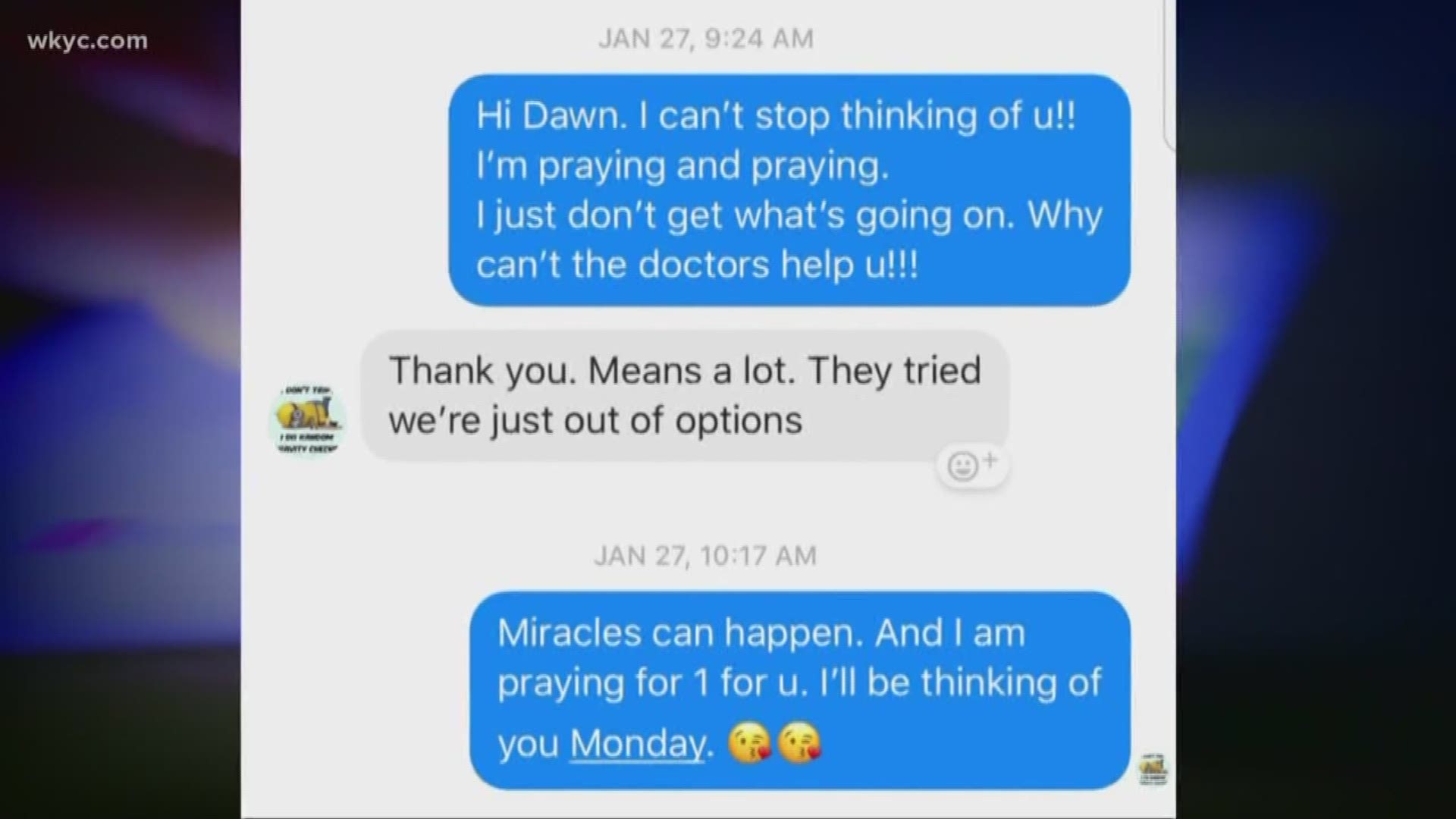 Cleveland police are warning area hospitals of a woman they say may be attempting to abduct a newborn child.

This same woman, Dawn Brown, and her husband, Cleveland police Officer Ken Brown, are under investigation for making claims that Dawn Brown is pregnant and has terminal cancer. Police do not believe the woman was pregnant nor ill.

She has also been the target of online social media scorn from cancer survivors and others who have supported her.

The officer abruptly retired Wednesday, a police spokeswoman said. Ken Brown had been assigned to the department's Gang Impact Unit.

The flyer for the drive states “Officer Ken Brown and his wife Dawn are expecting their beautiful baby girl Kassidy next month.” Other drives, showers and fundraisers were held in 2017, including one in Vermilion.

But it turns Dawn Brown may not be pregnant or physically sick.

It also warns employees that investigators are “concerned that Brown could attempt to try and take a baby from the hospital.”

Cleveland Clinic followed on Thursday with a statement saying: “Based on information we received from the Cleveland Police Department, we have taken extra measures to ensure patients are safe and secure at Fairview Hospital. We take this matter seriously and want to reassure our patients that their safety is our top priority.”

Channel 3 News first reported the allegations and has since looked into Dawn Brown’s history. She’s made claims of being pregnant with cancer before, and a woman matching her name and description was suspected of scouting local hospital maternity wards in 2001.

Ken Brown had been off-duty for an job-related injury prior to his sudden retirement. He is still being investigated internally.

In the November 6th post, Dawn Brown wrote that she’s been battling cancer since she was 16-years-old. She’s now 44-years-old and on her fourth pregnancy. She made claims of speaking in Washington D.C. and garnering support from President Trump and Vice President Pence.

At that time, she said she was 26 weeks pregnant and expected to deliver her child on December 15, 2017. The blood drive held for Ken and Dawn by the CPPA was held on January 14, 2018. She has not delivered a baby during that time.

Channel 3 News located a new baby registry for Ken and Dawn Brown with a Jan. 22, 2018 due date. Many of the items show they’ve already been purchased.

Dawn Brown made similar pregnancy claims in 2016, telling supporters in October of that year that she was carrying twins due on Dec. 15. She later posted that cancer claimed the lives on the unborn children.

A quick review of Dawn’s history shows her marriage to Ken is at least her 6th, according to court records. They met while shopping for toilet paper at a local Walmart.

One marriage ended back in 2000, with a court order requiring Dawn be “restrained from abusing, harassing, threatening, molesting and/or striking” her then-husband.

Another 2001 divorce proceeding ended with Dawn Brown being ordered to return a baby furniture set and other items to a different husband.

Finally, a 2005 divorce case shows all issues were resolved after Dawn ended efforts to collect from that husband’s pension or retirement plan.

Channel 3 News has made several attempts to speak with Dawn Brown to validate her claims of cancer and pregnancy. She hasn’t responded. Her Facebook account has also been removed.

A friend of Dawn’s refused an on-camera interview, but says she believes her pregnancy claims are true. She “felt the baby kick.” She couldn’t provide an explanation for Dawn not coming forward with proof.

Cleveland Police issued the following statement about the Brown case on Thursday afternoon:

“The Cleveland Division of Police is currently investigating a complaint of possible fraud being conducted by the wife of a Cleveland Police Officer. The female is suspected of making fraudulent claims regarding her medical condition(s). She is also suspected to have solicited donations via social media with online campaigns. Investigators are still gathering evidence pertaining to the female’s medical records.

The Police Officer associated with the case, Kenneth Brown (husband) retired as of February 7, 2018.

Area hospitals have issued statements to their employees and patients to be aware of her presence in order to ensure that their patients are safe. Charges have not been filed in this case. The investigation remains ongoing.”