ADL recorded 43 antisemitic incidents in Ohio in its 2020 Audit of Antisemitic Incidents. This is up from 25 incidents recorded in 2019 -- a 72 percent increase. 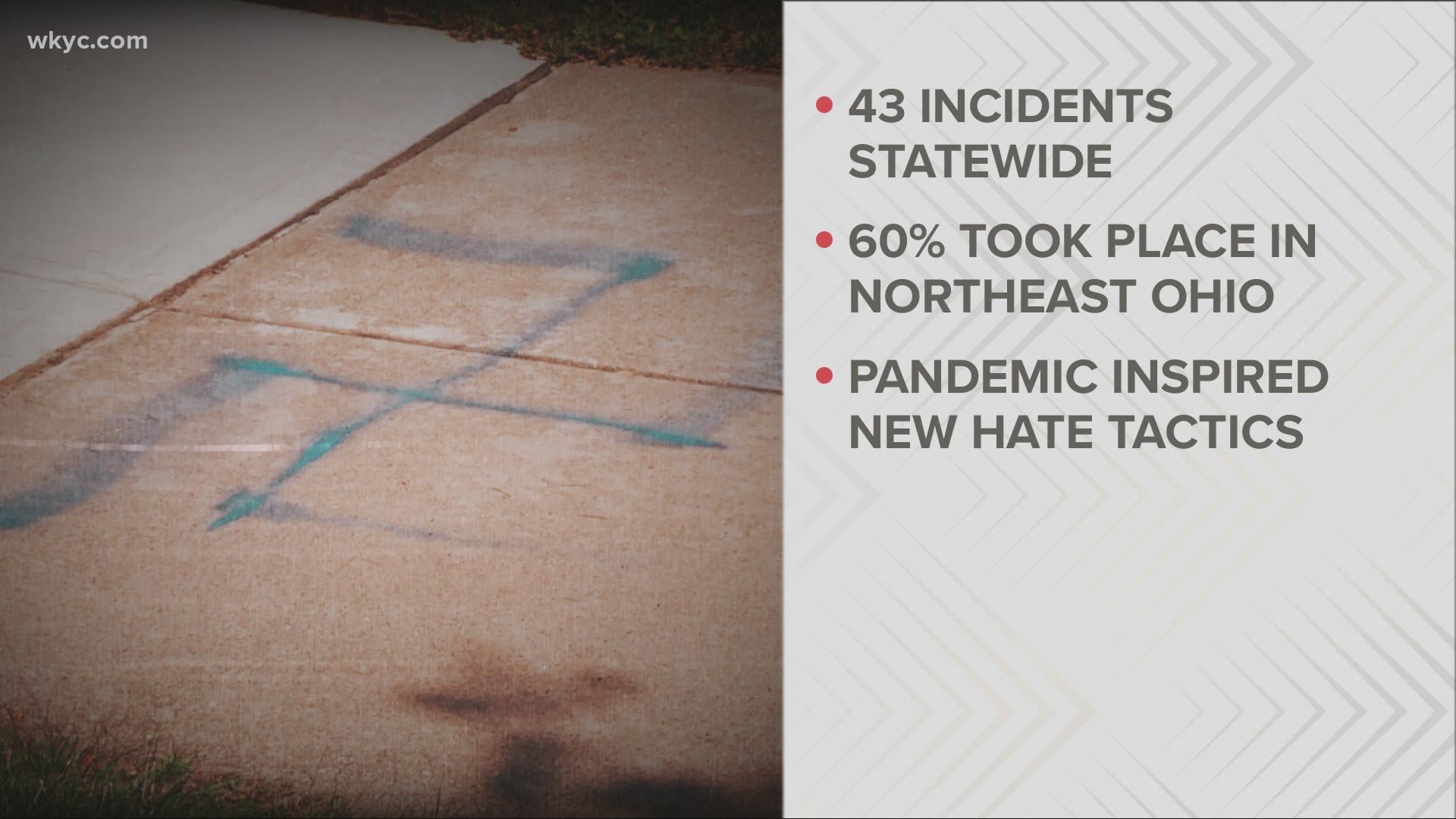 CLEVELAND — In 2020, Ohio experienced the highest number of antisemitic incidents recorded in the state since the Anti-Defamation League (ADL) began tracking in 1979.

The ADL Audit includes both criminal and non-criminal acts of harassment and intimidation, including distribution of hate propaganda, threats and slurs. The audit classifies incidents into three categories: Harassment, vandalism and assault.

Of the total incidents reported in Ohio in 2020:

• Harassment: There were 30 harassment incidents, a 76 percent increase from the previous year. ADL defines harassment as cases in which one or more Jews reported feeling targeted or threatened by antisemitic language or acts.

• Vandalism: There were 12 vandalism incidents, a 50 percent increase from the previous year. ADL defines vandalism as cases in which property was damaged in a manner that harmed or intimidated Jews. Swastikas, which are generally interpreted as symbols of antisemitic hatred, were present in 83 percent of these incidents.

• Assault: There was one assault incident, an increase from 0 in 2019. ADL defines assaults as cases in which individuals were physically targeted with violence accompanied by evidence of antisemitic animus.

“In 2020, Jews across Ohio had to combat two out-of-control viruses – the coronavirus and the virus of hate,” said James Pasch, Regional Director of ADL’s Cleveland Regional Office, which serves all of Ohio. “Despite coronavirus pandemic restrictions, antisemites still found ways to express their anti-Jewish hate. In fact, the pandemic inspired new antisemitic ideas and tactics such as Zoombombing, proving that bigots remain emboldened to act on their hateful ideologies. This problem is not going to disappear unless we act now to curb anti-Jewish hate in Ohio and across the nation.

Here are some reported incidents:

December, Rocky River, OH - A virtual conference held via Zoom was disrupted by unknown participants who posted images of swastikas and asked if the attendees liked Nazis.

November, Cleveland, OH - Vandalism that included a drawing of a swastika and the word "Jewish" was found at Lansing Avenue Jewish Cemetery.

October, Akron, OH - A Jewish funeral held on Zoom was disrupted by unknown participants who made antisemitic comments.

September, Cleveland, OH - A Jewish virtual prayer service held on Zoom for mourners was disrupted by unknown participants who shared pornographic images and stated "he deserved to die."

September, Oxford, OH - According to Miami University, a Zoom meeting hosted by a business fraternity was disrupted by unknown participants who used "racial slurs and anti-Semitic images."

August, Newton Falls, OH - A swastika and the white supremacist numeric symbol 1488 were found drawn in chalk on an outdoor basketball court.

August, Orange, OH - A man was issued a fourth-degree misdemeanor citation after multiple people, including two off-duty police officers, witnessed him carving a swastika on the sidewalk.

July, Columbus, OH - A swastika and the words "I love Nazi" were found etched into a parked car near The Ohio State University.

“We are disturbed by the elevated levels of antisemitism across the State,” said Pasch. “For years, we have called on elected officials, law enforcement, educators, civic leaders, and community members to do more to combat antisemitism, and there is no more time to waste. As we have seen across the country, from the Tree of Life Synagogue to Poway to Monsey, the stakes are too high to allow anti-Jewish hate to go unchecked in Ohio.”

Incidents remained at historically high levels amid the COVID-19 pandemic. As lockdowns related to the pandemic began in March, incidents in schools and on college campuses decreased as learning moved online. “Zoombombing”—the intentional disruption of live videoconferences—rose significantly in 2020. ADL recorded 196 incidents of antisemitic videoconferencing attacks last year, of which 114 targeted Jewish institutions such as schools and synagogues.

Editor's note: Video in the player above was originally published on April 7, 2021.