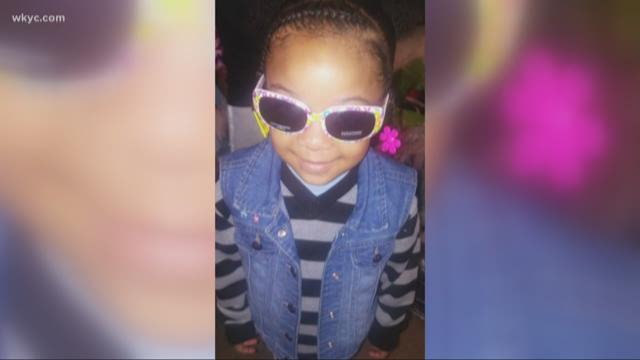 The silence was broken today for Aniya Day as a several dozen protesters chanted her name in a call for justice.

How, they questioned, were the 4-year-old’s cries for help ignored by so many for so long?

Why did it take her death to trigger an investigation?

Many in the crowd, which gathered outside the offices of Cuyahoga County Children and Family Services on Euclid Avenue, rallied in support of Garrett, who tried to gain custody of his daughter before she was killed.

Instead, and despite a troubling police report detailing 14 separate instances of abuse dating back to 2015, Aniya Day remained with her mother, Sierra Day, until she died March 11.

An autopsy showed signs of physical trauma and starvation.

The police report taken in May 2017 showed signs of emotional trauma as well.

“Am I being good?” Aniya would ask her daycare teachers, police noted in the report. Also noted were 14 entries of physical abuse. In many instances, Aniya attributed her bruises to her mother.

A social worker met with the family in 2017, according to the police report, but a county spokeswoman said it does not appear that Aniya was removed from the home for any extended time.

Rather, it appears, Aniya was left in the care of her alleged abuse.

"These people are crying for help the children of our community are dying coming through this system," protester Latonya Goldsby said.

Aniya’s death marks the fifth time a child died from alleged abuse. The deaths include Jordan Rodriguez, 5, whose body was buried outside his West Side home. A Children Services social worker is accused of accepting food stamps from Jordan’s mother in exchange for ignoring any abuse.

Cynthia Weiskittel, who heads the county agency, would not comment Monday. Instead, the county issued a two-sentence statement.

“We know that we are expected to see and recognize patterns of abuse and neglect and if the internal investigation determines we did something wrong there will be discipline.

We will continue to cooperate with the police and prosecutor.”

An internal investigation did not satisfy protesters. They asked for federal investigators to examine the actions, or inactions, of county social workers.

Aniya’s mother, Sierra Day, and the woman’s boyfriend, Deonte Lewis, have been charged aggravated murder in connection with the girl’s death.

According to Euclid police, Aniya was abused as far back as 2015.

September 2015 – A bruised face; looked like a hand print.

December 2, 2016 - More bruises and cries that her mother was abusing her.