The two discussed how Trattner got into the food writing business, the Cleveland restaurant scene, and the things he looks for in good restaurants. 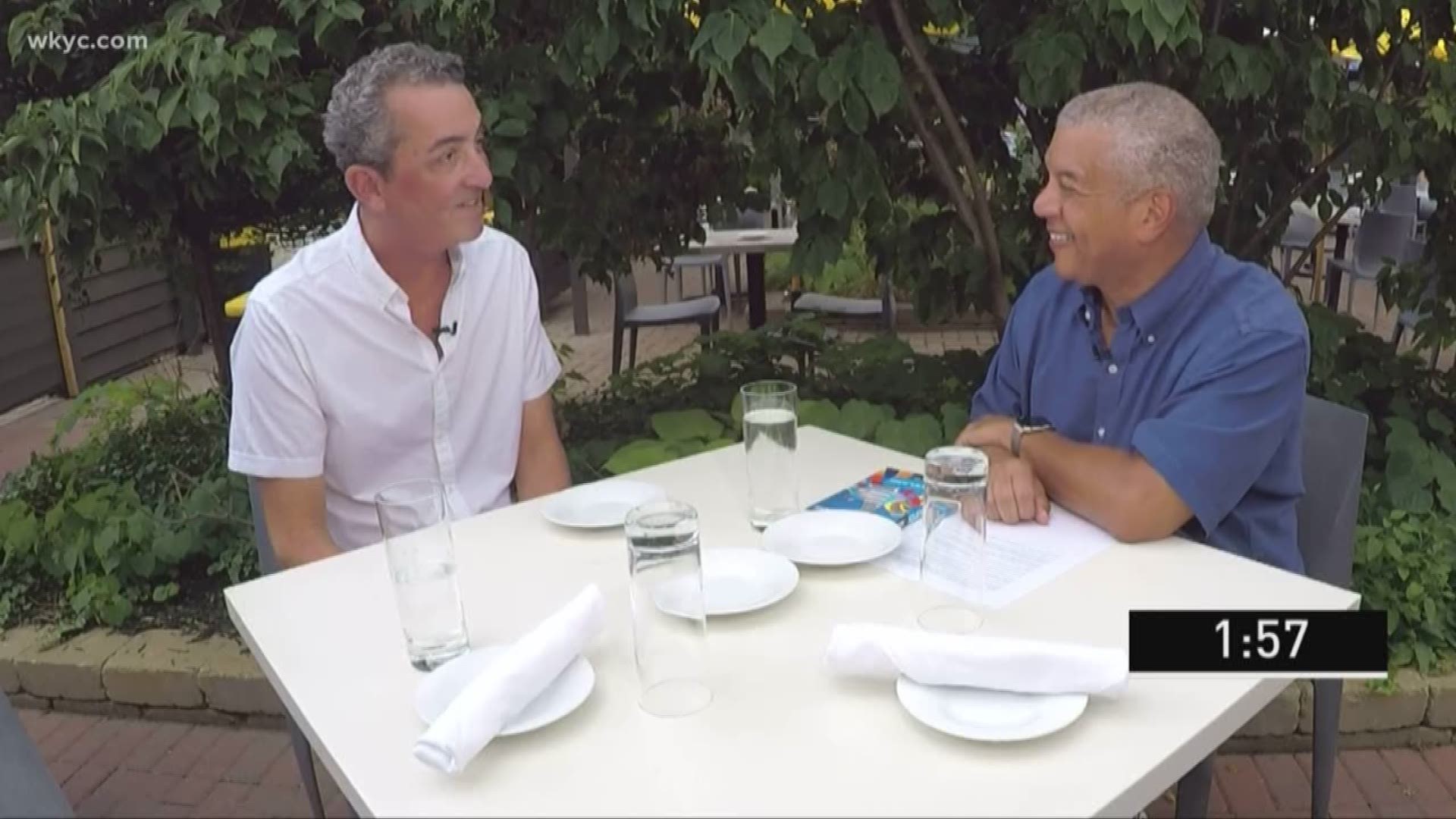 Are you looking for something fun to do this weekend and beyond? We've got just the person to help you out.

For the past two decades, Douglas Trattner has become a Cleveland food and fun guru, and his updated Moon Cleveland travel guidebook is a must-read for tourists and locals alike. He is currently the dining editor for Cleveland Scene.

Doug recently sat down with us at L'Albatros for "7 Minutes with Russ Mitchell."

RM: I've got to ask you: When you go out to the grocery store or wherever, how many times do people ask you, "Where should I eat tonight?"

DT: Only relatives, for some reason. (Laughs) I think a lot of people don't recognize me. I like to say I have a face for radio. I think people are just used to reading me on the page.

RM: Let's talk about the Cleveland food scene. I think it's safe to say that a lot of people who come to Cleveland—I was like this eight years ago—have no idea have no idea what a foodie town this is. Is that a relatively new thing? How did it happen?

DT: How it happened, we could spend probably weeks on that. It is interesting because, like you said, I started 18 years ago. We had a handful of good places, and then it just kind of really seemed to take off, but I also think it was happening simultaneously across the country. This kind of fascination with food and dining out and restaurants, you see it all over Instagram now. I think it was happening all over, but I do think Cleveland had a jump on almost all cities except for the big ones, of course. I think some of the reason that happened was because folks like Michael Symon and Rocco Whalen and Dante Boccuzzi...who came back or stayed in Cleveland and did things that were really world class. When they're doing it, they're training other chefs, who in-turn spin out new restaurants.

RM: Now when you go to review a restaurant, do you walk in with a disguise? How does that work?

DT: (Laughs) I demand green M&M's and everything!

RM: (Laughs) Well in fact I read one of your reviews. It was a restaurant you were reviewing, service wasn't great, they recognized you, and boom, things changed.

DT: Everything changed, and not necessarily for the better. It just changed. I do everything I can these days to stay anonymous. I don't make reservations in my name, I visit two times. You'd be surprised how many times I sneak out without anybody every seeing me. Of course, these aren't "Lola" places. These are sometimes small, neighborhood shops. They're not looking for me, but I do everything I can, but when I started and this whole Facebook thing started, I was the guy who didn't have any pictures up, I would remove tags of me, I did everything I could to stay anonymous. After a while, it just becomes silly. We've talked about restaurant critics who do disguises and stuff, even those days are over in cities like New York, Washington, San Fran. You could still go in there and evaluate the food and the service whether they recognize you or not. They are not automatically going to become incredible chefs, they're not going to all of a sudden have great product, and they're not going to all of a sudden have incredible service. These are things that are ingrained.

RM: If this is a fair question, what are your top two or three favorite restaurants in Cleveland?

DT: Well, I'm not allowed to have favorites, right? If I'm recommending them to family and friends, they're going to be places that I know are consistent in service and food and setting. Places like Flower and Fire and Flying Fig. Only places with an "F"! (Laughs) And L'Albatros, of course! My wife and I have spent more than a few anniversaries here. We live in Cleveland Heights, we're coming here because we know it's going to be fantastic.

RM: Hidden gems out there?

DT: Vero Pizza is going to spoil you for other wood-fired pizzas...I love Banter for poutine. They were the first ones to really bring in that amazing Quebeci junk food, french fries covered in cheese curds. I love places where you can try more than one thing, whether it's Ohio City Galley, or the Van Aken Market Hall where you can kind of hop around and try a bunch of little things.

RM: As a consumer, what should I be looking for when I go out to a restaurant?

DT: It starts even before you show up. You're calling for reservations, how are you treated on the phone? Is it professional? When you get there, does someone come over and greet you right away? These are simple things you'd be surprised how many people do not do. Once you're seated, does your server come over within a few minutes? Not to take your whole order, or even your drink order if they're busy. Just to say, "Hi, I know you're there, I'll be right back." These are simple things. When the food hits the table, they should be back within a minute or two to make sure things are right, that you got what you're supposed to get, that there's no mistakes, and after that, leave you alone and keep and eye on you.

RM: You've got a fascinating background. Orange High School, went to law school, you were a practicing attorney for six years. You wrote something on LinkedIn: "For six years I did my best to drive off the side of a bridge on my way to work." (Laughs) What about that job bothered you so much?

DT: (Laughs) I did my best to not drive off that bridge! I was a public defender, and I loved what I did. I loved the people I worked for, but it's a tough job, it's very much social work. Day-in and day-out, you're meeting 20 clients you didn't know existed the day before. It's a grind, I wasn't cut out for it. Fortunately, I was able to switch careers and start all over, and that's what I did when I moved back to Cleveland.

RM: Where did that come from, where you went from being a lawyer to this food guru? What led to that?

DT: So I relocated from Columbus and met a few folks who were photographers and writers for The Plain Dealer [and the old Cleveland Free Times], and I just staring doing really small articles. We're talking $50, $75, $100, and that's how I started. 20 years ago, doing little bit things and cobbling together and building a career out of it.

RM: Have you always been a food guy?

DT: I have always been a food guy. I have always loved to eat out. We always say the best thing my mother ever made was reservations. (Laughs) We ate out all the time, and not fancy places, but it was always kind of the funnest times. I had a big family, and we just had so much fun.

RM: Pardon the pun: Are you finding there's more of an appetite for writers of food?

DT: There really is. I think, more than ever, people are looking for a voice that they can trust. We're bombarded by so many people that have opinions, and that's great, whether it's Yelp or it's Instagram or whatever. Sometimes, people want to look at someone—even if they don't agree with them all the time—they can trust them, and I hope I'm one of those people.

RM: Your job seems like so much fun. Is that a fair assumption?

DT: No. (Laughs) I could not do this job, and my wife and I have been married for a while, we have no kids, and that's how I love it...If I didn't have a supportive wife and friends, I couldn't do this job. You're going out to eat all the time, and you can't do that alone. Sometimes you're going out to a restaurant in Avon Lake in the dead of winter, and you've had a horrible meal once but you're going back because that's your job. But most of the time, it's fun I guess to try all the new places. What I really like more than anything else is sitting down and writing. Writing is the fun, creative part of this whole job.

RM: New places are opening all the time. Anything we should look forward to in the next few months?

DT: John Sawyer is finally going to open up his new restaurant at Van Aken, which is a really cool little development if you haven't been out there. It's not giant, it's right-sized. He's doing a new sit-down place over there. He's kind of describing it as an up-scale Greenhouse Tavern. Then Doug Katz, another big name in this town, is doing something in Cedar. He hasn't done something new for a while, and he's going to do a restaurant that has Middle Eastern small plates. Lots of fun coming in the fall.