Over the past month, officers have been working directly with 115 body cameras to capture digital footprints within the city. 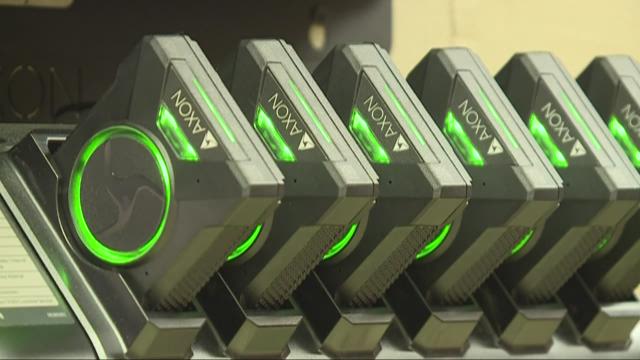 For the past four years, the city of Akron and its police department have been working together to bring body cameras to police officers. Today, the city announced the official deployment of the cameras on city streets.

“This organization will never back away from transparency,” said Interim Police Chief Kenneth Ball at a Tuesday afternoon press conference.

Over the past month, officers have been working directly with 115 body cameras to capture digital footprints within the city. Once training is complete in about 4 to 6 weeks, all 245 body cameras will be deployed within the department.

While it did take about four years to equip the police department with the cameras, Ball noted that the department had the largest testing period compared to departments “east of the Mississippi.”

The department worked with five body camera vendors, each supplying 30 cameras for a 90-day testing period.

The contract was given to Axon, formerly known as Taser International.

The cameras, about the size of a deck of cards, are worn on the outside of a police uniform. When the camera is turned off, it still has the ability to record video in 30 second intervals. When the device is activated, the recording includes 30 seconds of footage, without sound, that was recorded prior to an officer turning the camera on.

“Each officer is going to have between two to three hours of video per day,” said Lt. Mark Farrar.

That means the department is expecting to handle hundreds of hours of footage every day.

“You’re roughly looking at about 500 hours per day,” said Akron Mayor Dan Horrigan. “That’s about 250 movies. That’s your own Netflix. That’s how much video is out there on a daily basis.”

When an officer is done with their shift, the camera is placed in a docking station inside the department where the footage is automatically uploaded and stored on the station’s server.

The cloud-based storage server is equipped to handle more than just gigabytes of data, but petabytes which breaks down to 1,000 terabytes.

“This program over the five years for the contract we have worked out will cost the city of Akron almost a million dollars,” Ball said.

The city of Akron released the following breakdown of the costs associated with the program including cameras, storage, and maintenance:

The department received a more than $350,000 grant to help launch the program in 2015. That means Akron will be paying for the rest of the price tag, leaving city officials to highlight the importance for the proposed income tax hike on the upcoming ballot.

“We’ll make it work either way, but I think it highlights the importance of what we’re trying to do in investing in these new technologies now, to increase our transparency and increase our accountability,” said Horrigan.

The quarter percent income tax hike would bring in more revenue to help alleviate some of the city’s costs when it comes to both the body camera system and additional resources the department may need.