Mylett, who most recently served as police chief in Bellevue, Washington, will begin his duties in Akron on August 9. 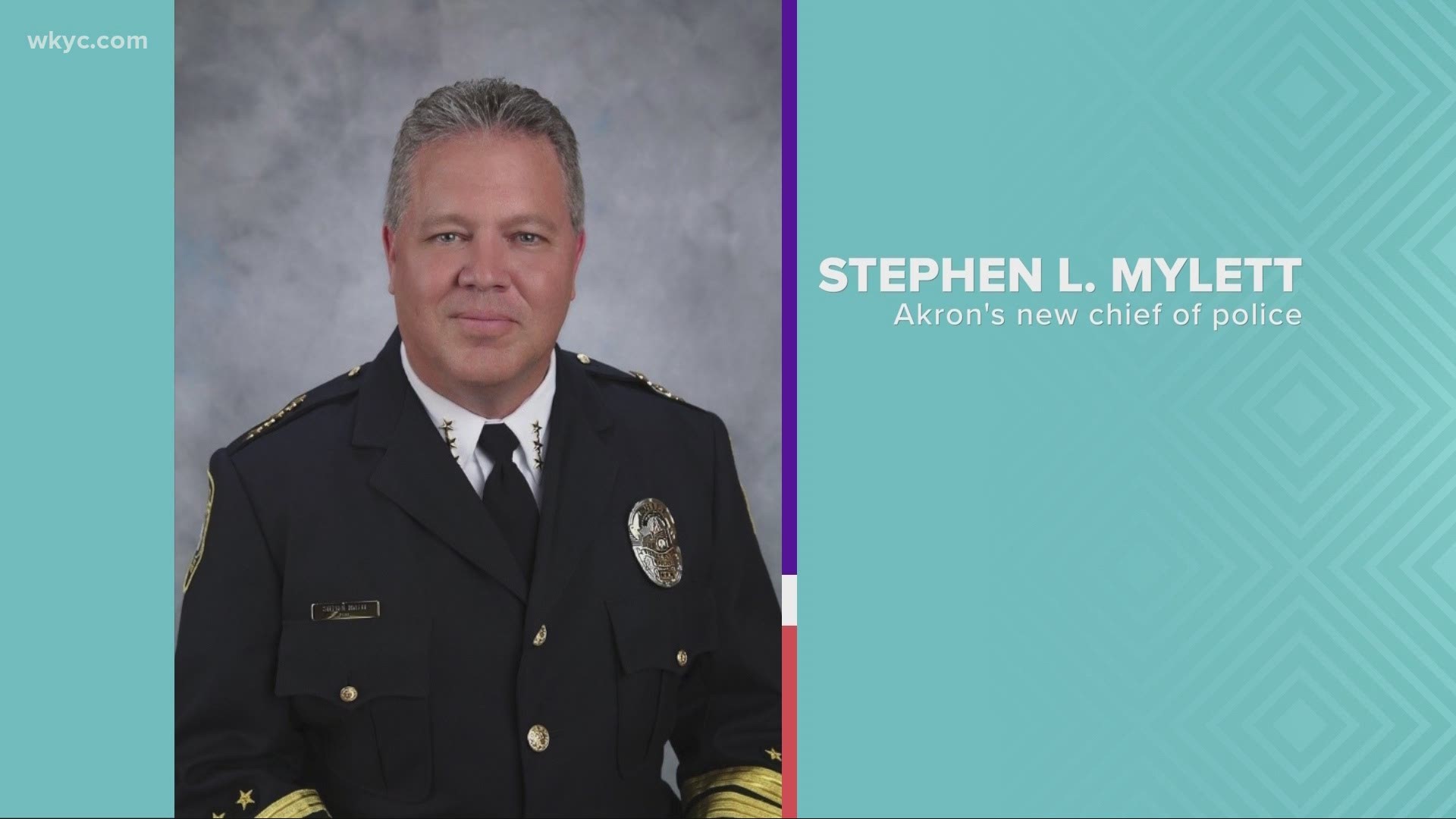 AKRON, Ohio — The city of Akron has announced that Stephen L. Mylett has been appointed as the new chief of police. The 32-year police veteran, who most recently served as police chief in Bellevue, Washington, will begin his duties in Akron on August 9.

In Akron, Mylett will lead a department of 447 officers, including 3 subdivisions, and manage an annual budget of approximately $70 million.

“I am honored at the opportunity to serve the Akron community and the officers of the APD as your next Chief of Police,” Mylett said in a release put out by the city. “In the past month I have had the opportunity to visit this City and found Akron to be a welcoming community whose leaders truly care about those they have the privilege to serve. I am very happy to be joining the Akron team.”

Mylett grew up on Long Island, New York and served in the Air Force before starting his law enforcement career in 1989 in Corpus Christi, Texas. He steadily moved up the ranks in that department before reaching the rank of Assistant Chief of Police in 2011. He then servied as the chief of police of Southlake, Texas until moving to Bellevue, Washington in 2015.  Mylett holds a Bachelor of Applied Arts and Sciences from Midwestern State University in Texas and a Masters Degree in Criminal Justice Leadership and Management from Sam Houston State University.

“While we had many strong candidates to be our next Chief, Steve’s experience and approach to leadership emerged as the right fit at the right time,” Akron Mayor Dan Horrigan said in a statement. “Steve is a demonstrated man of integrity, a successful leader of police personnel, and an engaged member of the communities he serves. Steve understands the challenges that Akron faces to reduce violent crime and increase community trust. I have confidence that he will quickly earn the respect of both the Department and the citizens of Akron, and I look forward to introducing him to our community, and each of Akron’s welcoming and diverse neighborhoods.”

Mylett was recruited through a nationwide search, with the support of consultant Ralph Andersen and Associates.  He was selected as one of four finalists for the position through an internal interview process. Prior to offering the position to Chief Mylett, Mayor Horrigan issued a community survey (with nearly 1,500 responses) and hosted a public town hall (with nearly 1,000 views on YouTube).

RELATED: Candidate for Akron's next police chief drops out of race, search continues

RELATED: 4 finalists make their cases to be Akron's next police chief

“The community feedback we received reinforces that our community wants a Chief that understands Akron, prioritizes inclusive policing, and will develop effective strategies to reduce crime and violence in our city,” Horrigan added.  As Chief of the Bellevue PD, Mylett restructured the department, implemented the Bellevue Police Department’s Tomorrows Program, established new coalitions with minority communities, and reduced crime for five consecutive years."

Mylett and his wife JoAnn are in the process of moving to Akron. They have been married for 30 years, and have four children and two grandchildren. According to a release from the city of Akron, Mylett’s base salary will be $144,788.80 per year, with an additional $29,722.20 annual bonus.

“My approach to this position will be centered on honest communication, procedural justice, and building coalitions," Mylett added. "I look forward to engaging with the men and women of the Akron Police Department who I have admired from afar, and to meeting with stakeholders throughout the City to learn more about their priorities, concerns, fears, and hopes for the future. By creating a shared vision we can help build trust, reduce crime, and enhance quality of life for all who call Akron home.”

In addition, the Akron Police Department says it is currently hiring officers. Applicants must meet the following qualifications:

Akron Police officers receive a starting salary of $58,864 (which reaches $68,764 in just three years). Cadets are paid during their time in the Akron Police academy and are offered college tuition through the city of Akron’s Workforce Development Program. For more information, please visit www.akroncops.org or call 330-375-2727.