An Akron mother says her kids were kicked out of a Cuyahoga Falls private school because she “committed adultery."

An Akron mother says her kids have been kicked out of a Cuyahoga Falls private school because an administrator says she “committed adultery”.

Summer Grant’s daughters Summara and Summaia, who were fourth and second graders, went to Chapel Hill Christian School for years.

She says an administrator banned her children because he believes she is living in sin.

"He said it was many reasons and the main one was because I was not married and my children had different fathers,” Grant said.

In a recorded conversation between Grant and administrator pastor John Wilson, he told Grant she violated the school’s covenant by having kids with different fathers and living with her significant other without being married.

Summara and Summaia’s last day at school was last Friday.

She says her kids have never been trouble. She says they’re great students, showing us certificates and awards they’ve won. One of the only times they were trouble was after a misunderstanding with their bus driver last week. The bus driver wanted her daughter to sit up in the front because he believed one of them wasn’t listening. Grant says it was an accident as her one of her daughters was talking to a friend.

Grant says Pastor Wilson has criticized her marital status before. She says during a conference in July, he questioned why her kids had three different fathers. Grant says he gave her a list of eight recommendations to improve her life.

“As Christian you are not supposed to judge,” she said. “You shouldn’t have affected these kids education over that."

In the recorded conversation, Wilson says being married and having kids by the same man is “strong recommendation” of the school not a requirement. Grant is wondering why she is being picked on when she says other parents have kids there and aren’t married.

Pastor Wilson declined to go on camera, but sent us a statement. He says parents sign a written agreement to reflect a commitment to Christ. Pastor Wilson says the Grant family acted in a manner “inconsistent” with the agreement. He didn't want to go into specifics but he says the “dismissal was necessary in order to protect the safety of our school children and their families”.

The school also issued a statement to WKYC, noting that parents sign a written agreement "to conduct themselves in accordance with expressed guidelines of conduct. These policies include, but are not limited to, behavior that relates to the physical safety of our students."

You can read the full statement below: 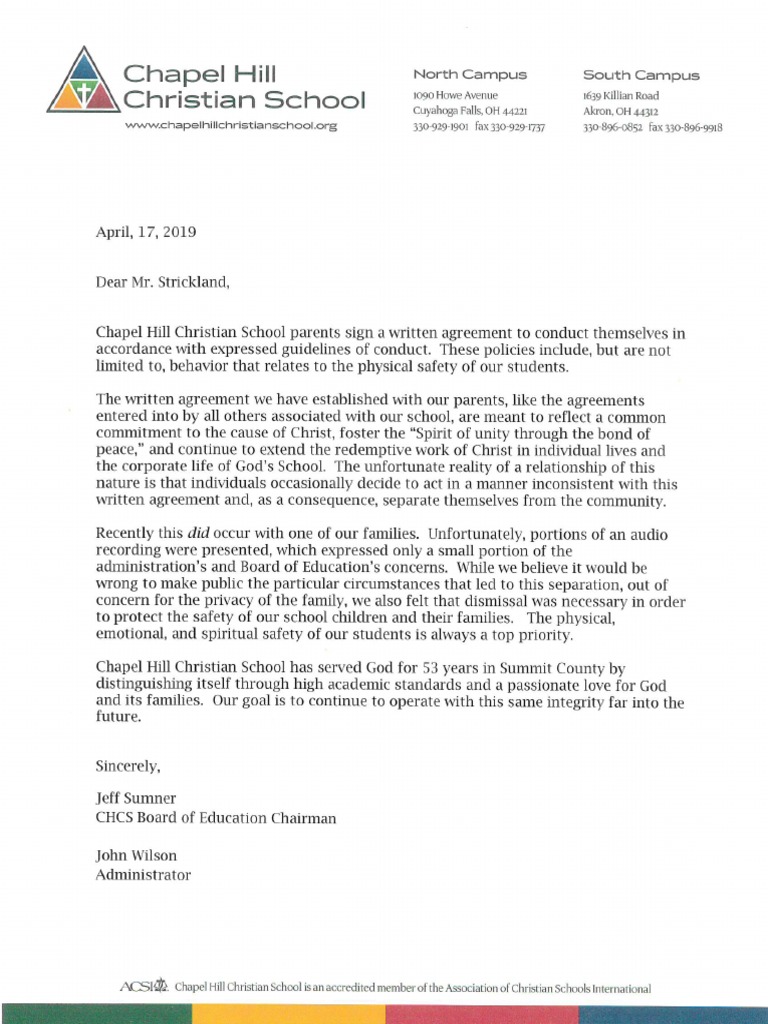 Grant says the timing couldn’t be worse. She says there’s about 30 days left of school. She says she can’t transfer them to a public school because her kids would lose a scholarship, which allowed them to attend the private school.

She hopes the pastor changes his mind -- not for her -- but for her kids.