Therapy dog helps to break down barriers for kids in Akron

At Julie Billiart School in Akron, they call it "the power of the pooch". A beloved canine in the classroom with so much to teach. 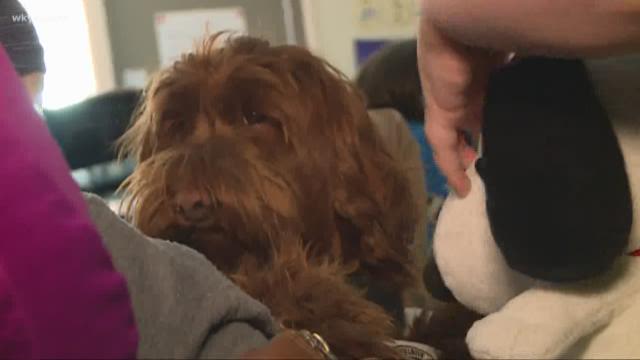 At Julie Billiart School in Akron, they call it “the power of the pooch".

A beloved canine in the classroom with so much to teach.

Sydney the Australian miniature labradoodle is the key to opening up beautiful little minds.

Compassion and unconditional love translates into confidence for kids who had trouble finding it anywhere else.

"Hi Sydney Loo Who!" the kids greet the reddish brown fluff ball when she prances in.

"You watch Sydney in the classroom and she displays what love does to somebody," says Julie Billiart Akron Principal, Jason Wojnicz.

"In previous settings, it has been difficult for them to find relationships and they have a difficult time trying to connect with peers as well as teachers,” says Wojnicz.

That's where Sydney steps in, bridging the gap for kids like Graysen Davis.

For this 6-year-old, Sydney has proven a tried and true faithful friend.

At first Graysen only spoke one or two words.

“Can I have the treat please?” Greysen asks his speech and language pathologist Sarah King.

"What do we say to Sydney when we give it?”

“Here ya go!" Greysen answers clear as a bell and with a proud smile that lights up the classroom.

"He gives her commands like Sydney come here. Sydney get your ball. Sydney, sit. He wasn't saying those things before and Sydney isn't judging him," says Greysen’s teacher, Gabrielle Redovian.

"She follows his commands," she adds.

Not yet two years old, Sydney, who doesn't speak a word, is breaking down communication barriers.

Students read books out loud with confidence with their Sydney snuggled up next to them in the carpeted reading corner.

"She wants to be helping them. And they don't even realize that she is helping them sometimes. They’re motivated by her,” says Redovian.

"Because she just keeps all of us calm," says our new friend, 7-year-old Stuart Wilkerson.

“She is a very special dog.” Stuart figures if Sydney can’t talk, he will for her.

"She keeps us happy and keeps us in a happy mood and makes the whole school better".

It was love at first sight for Stuart on Sydney's first trial visit.

"She was super duper good. She deserves to be here," Stuart says with his buddy Sydney laying like the cutest stuffed animal by his side.

"You can just see these kids light up and come alive. Sydney brings out something that we can't unlock in them," says Redovian, as we witness it first hand.

"Since he's had Sydney, his speech has just taken off and skyrocketed," says Bell.

Julie Billiart School in Akron is hosting an open house Friday, February 23, at 9 a.m. for parents interested in new options for their child with special needs.