The families of Stone Foltz, Collin Wiant and Tyler Perino believe Collin's Law is the first step toward making Ohio the safest state from hazing. 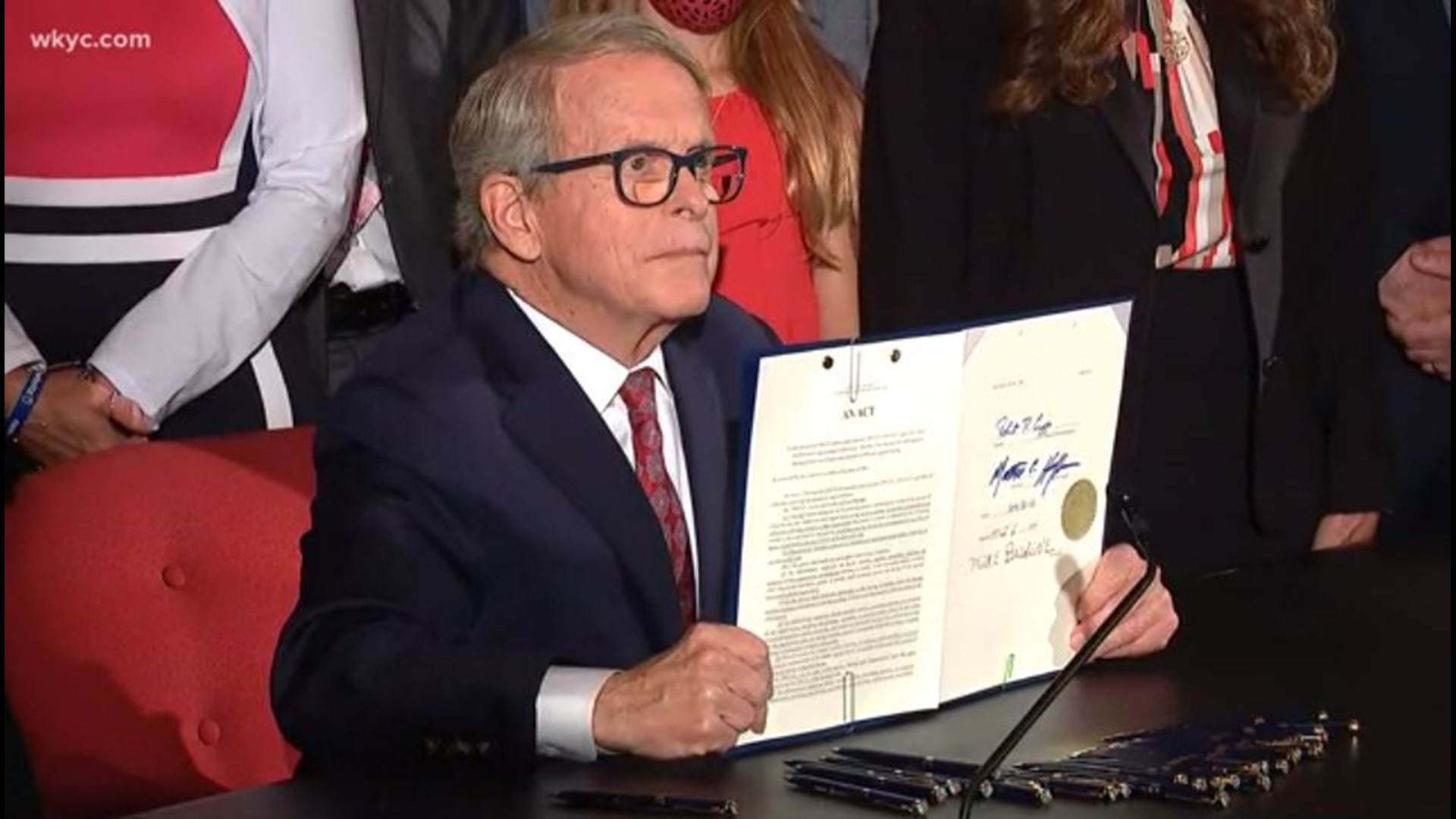 Collin's Law was reintroduced in March after Foltz's death. The law is named after Collin Wiant, a freshman who died from hazing at a Greek event at Ohio University in 2018.

DeWine signed the bill in front of the Wiant and Foltz families. He said there is a culture of hazing, which has to change.

"We are saying with this bill that we will not tolerate hazing," DeWine said. "This is really about culture; the culture of hazing has been accepted. This bill says going forward that hazing in the state of Ohio is not tolerated."

Shari Foltz, Stone's mother, spoke following the signing. She said Collin's Law is a step in the right direction.

"It's hard. It's only been four months," she said. "We made a promise to Stone at his hospital bed that we would continue to fight. We will stop when hazing is done and eradicated."

“I’m proud to have worked with my colleagues in the General Assembly as we came together in taking steps at combating hazing at our institutions of higher education. We shall never allow the names of Ohio University student Collin Wiant or Bowling Green State University student Stone Foltz or other victims to ever be silent. These two young men lost their lives as the result of hazing, and while their families continue to grieve they remain committed, as do I, to making sure such tragedies never happen again.

“Simultaneously, I introduced similar legislation to Senate Bill 126, which also touched on the concerns of K-12 bullying happening in our schools. While this was not in the final version signed into law today, I remain adamant and committed to further addressing bullying incidents that occur around our state so that all our children feel like they’re in a safe and secure environment when receiving an education.

“I’m thankful to the governor for signing this bill today, and I look forward to our continued dedication to finding solutions on these issues.”

Rex Elliott, who represents the Wiant and Foltz families, believes it's the start of making Ohio the safest state in the country from hazing.

"I actually believe that both the Wiant and Foltz families would both have their children if legislation like this were in place," said Elliott.

Prior to Collin's law, the most someone in Ohio could face for hazing was 30 days in jail.

Collin's Law will increase general hazing to a second-degree misdemeanor, punishable by up to 90 days in jail. Aggravated hazing, which causes serious physical harm or death, will now be a third-degree felony.

"It's definitely something that I think will save lives," said Tyler Perino.

Perino counts himself lucky to be alive today to share his story of hazing while at Miami University. Now a senior at the University of Toledo, his testimony earlier this year before the Ohio legislature helped lead the new legislation to the governor's desk.

"I truly think that this bill will have those harsher punishments," said Perino, "but jumpstart the change in culture which is something I believe that we truly need as well."

The bill will also require staff and students to report hazing they witness. If they don't, they could also face criminal charges.

RELATED: No, hazing laws are not the same across the United States

"Nobody needs to be regarded as a snitch anymore," Elliott added. "No one needs to be afraid of that. They can come forward now because they are complying with Ohio law."

Elliot, with Cooper and Elliott also represents Tyler Perino. He says all of the families have made it their mission to eliminate hazing for good.

"Foltz and Wiant families have pushed very hard for universities around the state to implement these policies and procedures now, before the fall of '21 begins," said Elliot.

The Foltz family is working with the Inter-University Council of Ohio (IUC) to create the new anti-hazing standards. Elliott says they plan to announce them in the next month.

Once Gov. DeWine signs the bill, it will go into effect in 90 days.