"We need all leaders and all Texans to join us in backing the blue," the governor said. 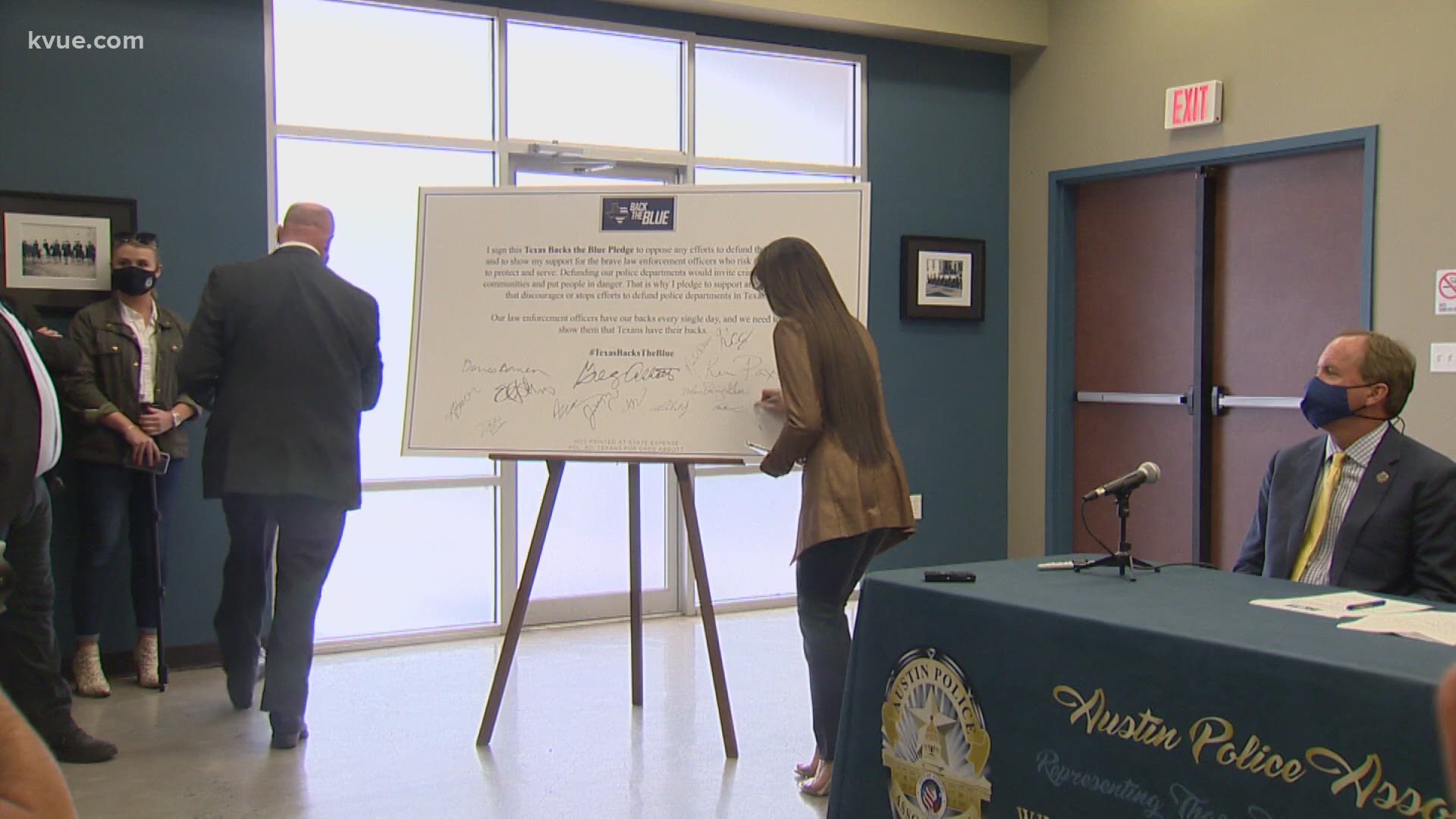 AUSTIN, Texas — After Austin voted to make budget cuts to the Austin Police Department, Gov. Greg Abbott is asking candidates in the upcoming election to sign a pledge on his website against defunding police departments.

A total of $150 million from APD's budget will go to other services.

In a video posted on Abbott's YouTube channel Sept. 9, the governor said budget cuts invite "crime into our communities and it threatens the safety of all Texans, including our law enforcement officers and their families."

“Cities should prioritize public safety and the last thing they should do is defund any law enforcement,” said Gov. @GregAbbott_TX. He said that is “exactly” what the City of Austin did.

"We need all leaders and all Texans to join us in backing the blue," he said in the video. "That is why I'm calling on every Texan and every candidate for public office, regardless of party affiliation, to join me in signing a pledge against defunding our police departments."

He's asking Texans to sign and share the pledge on social media Thursday at 2 p.m. using the hashtag #TexasBacksTheBlue.

"Our law enforcement officers have our backs every single day," said Gov. Abbott. "We need to show them that Texans and their elected leaders have their backs too."

"Are all law enforcement officers perfect? Absolutely not. We want to hire better officers. We want to train them better. Those things do require more funding though," said Gov. Abbott.

During a press conference Thursday afternoon, Gov. Abbott also announced a legislative proposal to remove a city's annexation powers if it defunds its law enforcement.

"Cities that defund their police department will forever lose their annexation powers and any areas and any residents that have ever been annexed by that city in the past will have the power to disannex them from the city. Combined together, all of these proposals would make it, basically, financially impossible to defund law enforcement and leaves Austin no choice but to restore the cuts they made to law enforcement," the governor said.

According to the City of Austin's annexation policy that's posted on its website, "annexation improves the city’s economic base and enables Austin to manage growth and development."

Bonnen went as far as calling the defunding movement "garbage."

"There are very few professions in America where you go to work and you may not come home. This is one of them. Shame on any community that would not support this profession, financially or otherwise," Bonnen said. "It is a pivotal time in our country that they know this defund garbage is simply garbage and that the silent majority is with law enforcement."

Casaday, whose association's headquarters hosted the press conference, asked community members and local and state politicians to step up and sign the governor's pledge.

"It shows your weak leadership and your weak personality if you do not sign this," Casaday said.

"To be clear - Austin City leaders have neither defunded the police department nor support doing so. I'm unaware of any elected official who believes differently. The Governor’s pledge is political theatre intended to scare and distract us from important public safety conversations about opening our children’s schools and saving lives during the pandemic or whether police should be mental health first responders and social workers. Austin is the safest big city in Texas and among the few safest in the country. We’ll continue to make an already safe city even safer and, importantly, safer for everyone. As we get closer to November, expect more distractions that intend to divide rather than unite."

Gov. Abbott said, however, that defunding is "exactly what the City of Austin has done."

The move comes as a group of six local advocates announced a new political action committee on Wednesday called Fight for Austin PAC, with the goal of raising $300,000 for the November elections.

The group said in a statement on Wednesday its goal is to support candidates who they say prioritize public safety.

The group is targeting councilmembers up for re-election this November after City Council unanimously voted in favor of the APD budget changes.

“Incumbent council members have made our city less safe,” said PAC board member Matt Mackowiak. “Our Fight for Austin PAC will give Austinites an opportunity to support candidates who will make our city safer. It is time Austin fights back against City Hall. It is time we throw the bums out.”

Councilmembers have argued the changes to the police budget were made to improve public safety following widespread protests against police brutality.

The Texas Democrats responded to the move on Wednesday, calling it "a political stunt."

"Greg Abbott knows Texans are fed up with his mishandling of the coronavirus pandemic, so he tries a tired old trick to change the subject and manufacture fear," said Texas Democratic Party Executive Director Manny Garcia.

Garcia said Abbott was "desperate to change the narrative."

"Texans know that equal justice has never been real for Black Texans and many others," he said. "They know that we must dismantle systemic racism, and they know peaceful protest against police violence should not be met with more violence, yet that’s exactly what Donald Trump has advocated for. We must always strive to fulfill the American promise, that all are created and treated equally."

At a press conference in August announcing a legislative proposal that freezes property tax revenue for cities that vote to defund police departments, Abbott stated Austin has seen an increase in crime, specifically murders, aggravated robberies and robberies.

According to a report looking at data from June, the Wall Street Journal reported Austin saw a 64.29% increase in homicides compared to the same point last year. Specifically, there were 14 murders at the end of June 2019 and 23 murders by the end of June 2020.

After Thursday's press conference, the Texas Democrats released the following statement calling it all a "weak photo-op meant to scare suburbanites":

“Nearly 14,000 Texans have died from COVID-19. 3.4 million Texans have filed for unemployment since March. The short term fix of $300 unemployment insurance expansion for Texans unemployed due to the pandemic, runs out today. Systemic racism continues to plague our state and our country and threatens the lives of Black Americans and people of color. Abbott didn’t mention any of these issues today during his fear-mongering, photo-op of a press conference.

“Abbott’s pledge to defund cities that follow their values and prioritize local resources to better keep their communities safe essentially defunds the police. It’s nonsensical and a weak attempt to try to look tough in front of the cameras. Abbott can make all of the pledges he wants, but the reality is, Texans know what the real issues affecting their daily lives are.

“If Abbott cares so much about Austin city politics, he should run for Mayor of Austin, and we will look forward to ending his political career. For anybody who wants to see a real pledge that puts Texans first, visit the Texas First Pledge here.”