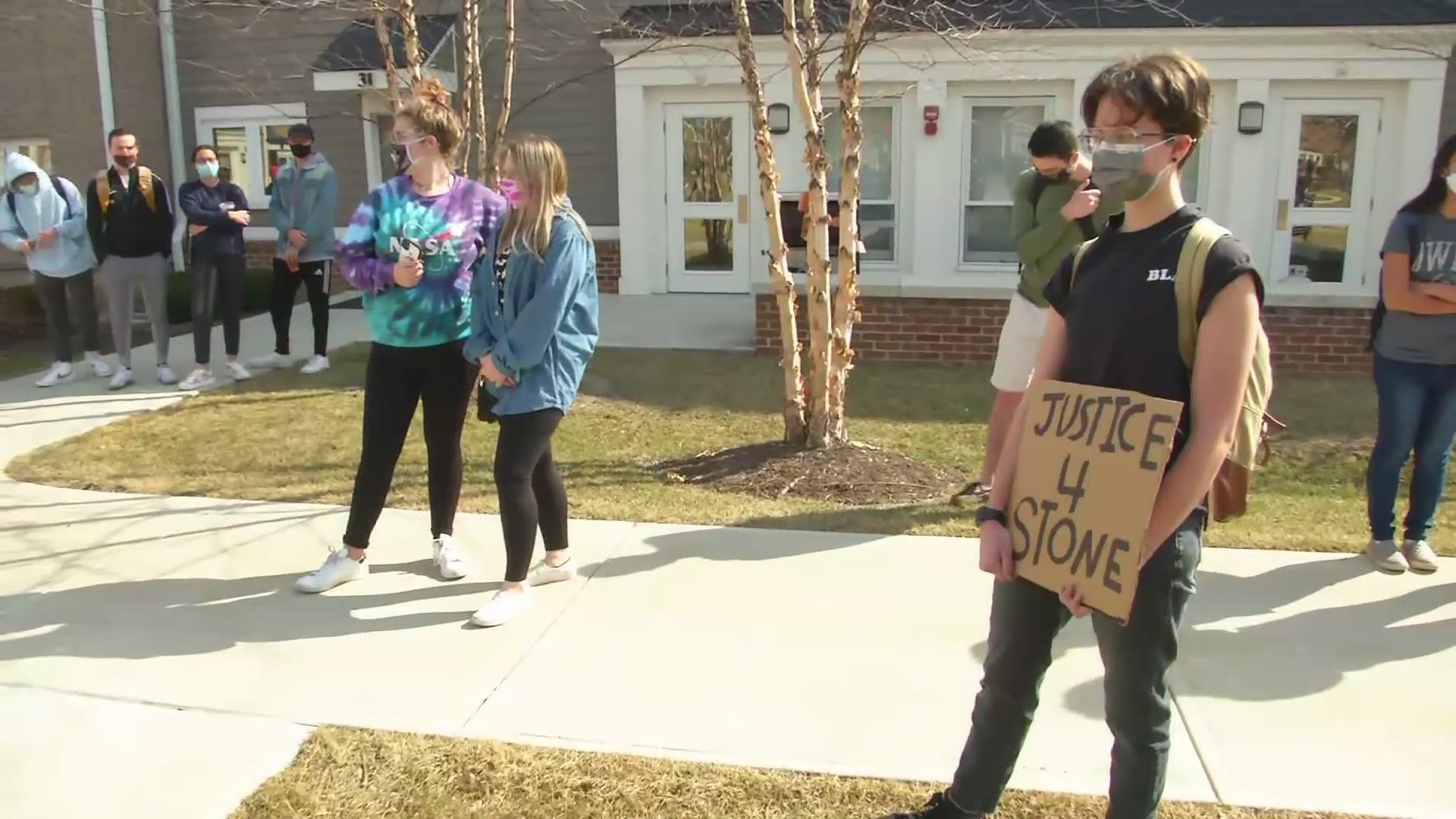 BOWLING GREEN, Ohio — A group of students at Bowling Green State University held a moment of remembrance for deceased BGSU student Stone Foltz on Tuesday, followed by a march to the university president's office where they chanted and demanded changes take place within Greek life.

The event, which drew about 100 students, started at the now-delisted Pi Kappa Alpha fraternity house at 11 a.m. with a period of silence to pay respect to the 20 year old who died Sunday after being hospitalized following an alleged alcohol-fueled hazing at an off-campus Pi Kappa Alpha event on March 4.

The fraternity has been placed on interim suspension as law enforcement officials look into the situation.

The suspected hazing incident is being investigated at Bowling Green State University, representatives with the college announced March 5.

On Sunday, an attorney speaking on behalf of the Foltz family said the sophomore had passed away that afternoon. The family was working with doctors to donate his organs. The attorney stated that the family will also be opening an independent investigation.

On Monday, a Bowling Green Police Division spokesperson told WTOL 11 that no arrests or charges have been filed in relation to Foltz's death.

chanting has started outside McFall Center. They say the University has been silent on hazing and they say it’s time to be loud. @WTOL11Toledo pic.twitter.com/5NS8P8jGMP

Event organizers say this isn't the first time the fraternity has caused issues and the university has been quiet.

"We've said it before and I'll say it again. This isn't an isolated incident. They could have listened then and now we're here. It's disgusting, this is so disgusting and it never needed to happen," one of the organizers said.

After the moment of silence, participants marched silently to the McFall Building where the offices of individuals such as President Rodney Rogers and Provost and Senior Vice President for Academic and Student Affairs Joe Whitehead are housed.

"We had a silent march because for years the university has been silent on this issue. It's time now for us to be loud," one of the student organizers said.

Chants of "HAZING KILLS", "JUSTICE FOR STONE" and "SILENCE KILLS" rang out outside the McFall Center as students brought their protest and demands to administrators.

"Of course Stone deserves justice, but there are so many other victims that haven't been able to speak up because like someone else said up there. There's violence, sexual assault and harassment they experience in Greek life," one of the protesters, Olivia Metcalfe, said.

The organizers outlined a list of demands to BGSU in the wake of the incident, including asking the university for the permanent expulsion of the Pi Kappa Alpha fraternity on BGSU's campus and the immediate resignation of Dean Stacey Allan and the advisers to the Office of Fraternity & Sorority Life.

"I think people just need to speak up. And I know there are other sisters, people I would still call sisters, that experience the same thing that are too afraid to speak up or do something about it because there's no way of reporting what happened without your name being attached to it," BGSU junior and former Greek life member, Hope Schneider, said.

They call for the establishment of a clearer system for reporting harassment, hazing, assault and other similar incidents specifically within the structure of Fraternity and Sorority Life.

"This system needs to involve the victims and objective third parties that have no interest in the preservation of Fraternity and Sorority Life," event organizers said.

A spokesperson for the university released a statement following the protest.

"We share in their outrage about the alleged hazing activity from Thursday night. Hazing in any form has no place at BGSU," Alex Solis, BGSU spokesperson wrote.

The full statement can be found here.

A message for the BGSU community. pic.twitter.com/jiQUfEpUjy