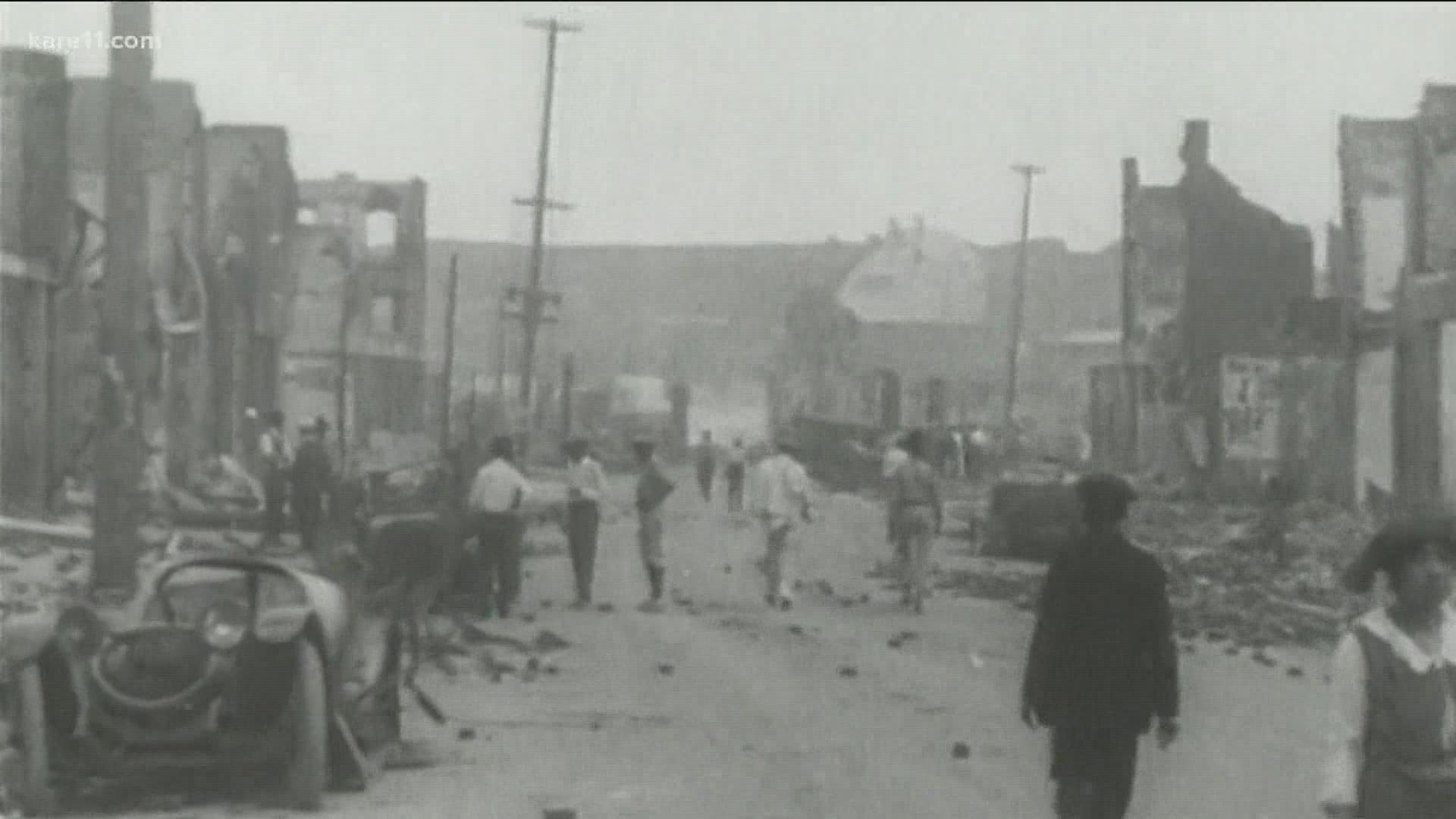 MINNEAPOLIS — On a day in which America takes time off to remember those who gave their lives fighting for this country, another solemn remembrance is taking place in Oklahoma, to recognize hundreds of Americans who had their lives taken from them during the Tulsa Race Massacre, also known as the Tulsa Race Riot of 1921.

"Its echoes loom large in the history, not only of Tulsa, but also in the history of the United States," said Dr. Yohuru Williams, Professor of History at the University of St Thomas.

But as the nation recognizes 100 years since the massacre, Dr. Williams acknowledges that many Americans have only just begun to learn about it.

"Unless you took an African American history course, it's highly unlikely that you would have heard about the Tulsa Race Riot in 1921 or any other incidents like that, which involved spectacular violence against African American communities in the United States," Dr. Williams said.

In Tulsa, like with many other race riots at the time, Dr. Williams says the complete destruction of Greenwood, a prosperous African American neighborhood also known as Black Wall Street, began with false accusations.

"When people tell the story of Tulsa, they begin with Dick Rowland, who was a young man who was accused, falsely, of attacking a young white girl in the elevator, Sarah Page," Dr. Williams said.

Though Page never pressed charges herself, a newspaper article about the alleged incident incited a lynch mob. Later, when the white crowd confronted a group of Black World War I veterans who had tried to protect Rowland, a struggle over a gun led to a single gunshot. Though both groups retreated, the white resident mobilized a coordinated attack, involving guns, arson and bombings that lasted days.

"Even today, it's mind boggling to imagine that that level of destruction and violence went on for three days," Dr. Williams said. "You had African American families separated, families members killed literally in front of their children and grandchildren."

In the end, nearly 35 square blocks were destroyed and 10,000 people were left homeless. An estimated 300 people died, though it remains an inexact figure because a full accounting of mass graves continues. So too does the wait for accountability.

"No one wore a mask in Tulsa," Dr. Williams said. "We're not talking about Ku Klux Klan violence, we're not talking about night riders or those who disguised their identities. The perpetrators of that act were well known to authorities. No one was ever arrested or held accountable for what happened in that space."

And that wasn't limited to Tulsa. Dr. Williams says smaller race riots, including the 1920 lynching of three wrongfully accused Black men in Duluth, took place all across the country during that time period. In the decades that followed, Dr. Williams says the destruction of Black neighborhoods was compounded by government.

"The second wave of the dismantling of Black Wall Street took place in the 1970's with urban renewal," Dr. Williams said. "When they actually ran the interstate through the remnants of that community, very reminiscent of what happened (in St. Paul's) Rondo community. It's not just the violence, but then the policies, practices and procedures that are put through by the government that ultimately end up accomplishing the work of destroying this thriving Black community, and eviscerating the foundations for that community ever to be able to resuscitate itself."

Which is why, amid another reckoning on race, Dr. Williams is challenging everyone to think about how we can all work to make these communities whole again, beginning by acknowledging the holes left behind.

"I would hope that people would recognize that there's a lot of history, hard history, that we have to confront in order to really talk about healing and reconciliation in the United States," he said. "You really can't get to healing unless you experience the hurt."

On Monday, President Biden issued a proclamation to remember the 1921 massacre, calling on Americans to "eradicate systemic racism and help to rebuild communities and lives that have been destroyed by it." He also pledged federal support to make it happen. On Tuesday, the President will travel to Tulsa to give a speech marking the second day of the massacre.