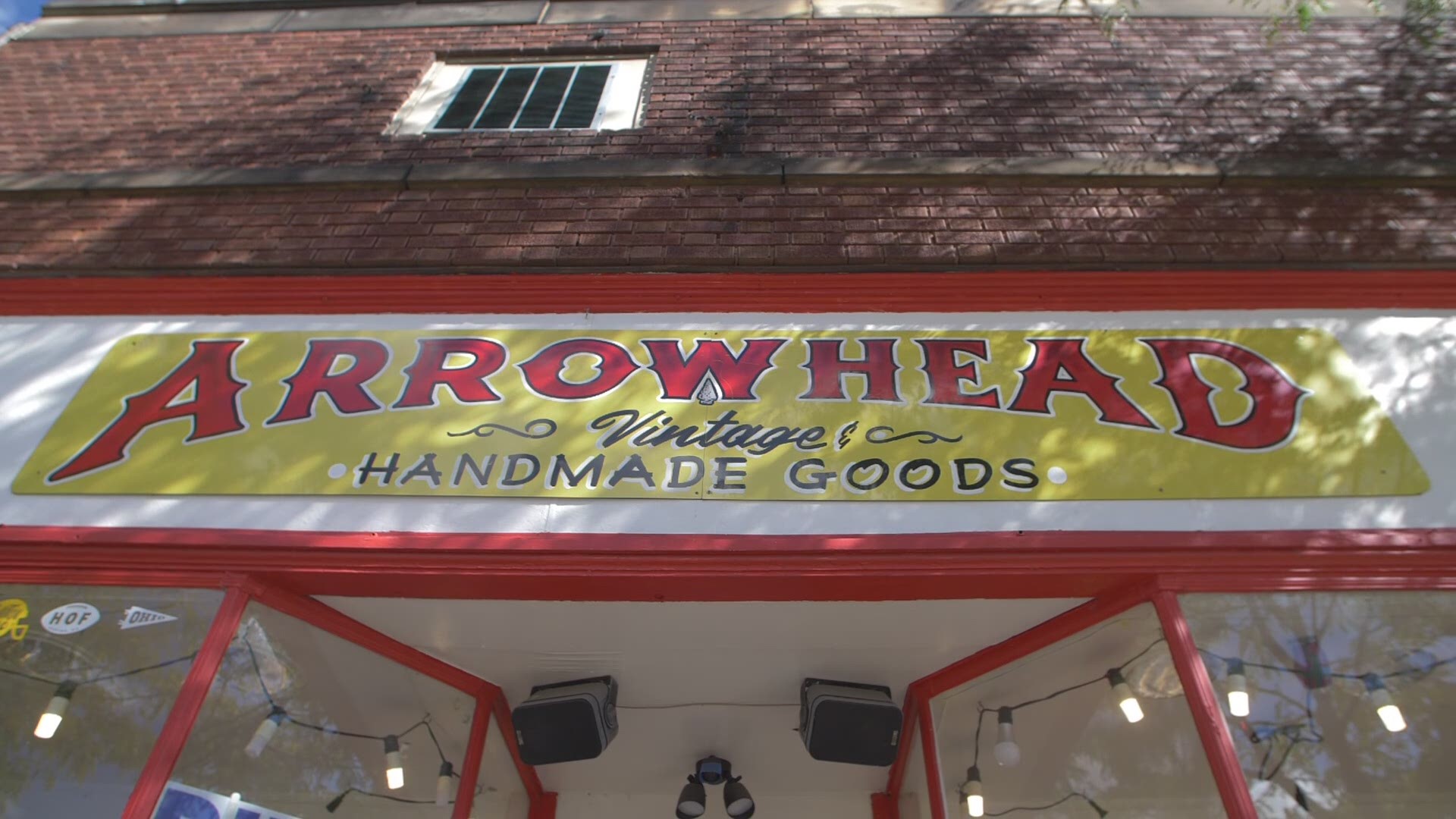 CANTON, Ohio — Arrowhead Vintage and Homemade Goods sits in Canton’s Art District. The store's 6th anniversary is next month, but it almost didn’t make it.

“2020 has been rough. A lot of the businesses around us have closed,” said Dave Sherrill who co-owns Arrowhead with his wife Melissa.

The couple actually closed the vintage store before ordered by the Governor. They’d been following closely the news about COVID-19 and Dave’s immune-compromised.

“I have to be exceptionally careful. So, we’ve just been doing online sales. My wife has been making and selling handmade masks,” Dave said.

Credit: WKYC
Dave Shirrell is careful when he adds to landscape paintings. "I have to be respectful of what they’ve made beautiful in their original art."

Mask sales and a few online sales helped. But it wouldn’t be enough. Dave continued with his artwork, or as he calls it ‘altered art.’

“We take landscapes from thrift stores, Goodwill and motel art. Bob Ross looking stuff. And then I add characters from films like Godzilla and NeverEnding Story and Star Trek and fun stuff like that.”

He’s careful about what he paints, and what the original artist has created. “If I’m adding to some else’s art, I have to be respectful of what they’ve made beautiful in their original art, so that I can make mine a part of the universe they’ve created,” he said.

While his creations are varied, Dave has his favorites. He is, after all, a Jedi fan for life.

Credit: WKYC
While a number of businesses in Canton's Art District have closed, Arrowhead is still open, albeit to online orders and curbside pick up. The shop will mark its 6th anniversary in October.

“I’m a huge Star Wars fan. I’ve seen every Star Wars film in the movie theater, including the 1977 film, which I watched at one-years-old.”

With funds dwindling, and on a whim, Dave posted one piece, he calls “R2 vs. The Empire,” on Reddit.  He was only looking for a little feedback on his work. Nothing could have prepared him for what happened next.

“All of a sudden my phone started sounding like a pinball machine. Just constant messages. And at one point, I got a message from someone saying that Newsweek wanted to write about it. I thought they were joking,” he said.

The callers and texters were right. On Reddit, Dave’s painting has received some 300-thousand views, and more than 90,000 likes. Comments were overwhelmingly positive.

“I had a landscape in the store that I was trying to sell and I marked it down to $5 and it sat for two years. So I added a couple AT-ST's and a couple of ewoks, and it sold pretty quickly,” Dave said.

He’s doing more commissioned art now too, adding Joe Exotic from Tiger King, characters from Game of Thrones and “The Dude” from Big Lebowski. Arrowhead Vintage and Homemade Goods is now on the upswing. Dave says he doesn’t have the magic answer on how to turn your business around in a pandemic. But he does have this thought: “Keep trying to be agile. The world changed in early March and if you are in the same place, you are not going to go forward. This is a different world. You have to change with it.”

Dave says if doing altered art is how he makes his money going forward, he is okay with it, calling his new focus, “an honor and a privilege.”

Dave has a number of unused landscapes listed on his website, ready to include a new Star Wars character, or maybe even Big Foot. He was recently commissioned to add Garbage Pail Kids to a painting.  You can check out his work here.