Northeast Ohio natives share their memories with the rest of America from the moment they learned we had been attacked on September 11, 2001. 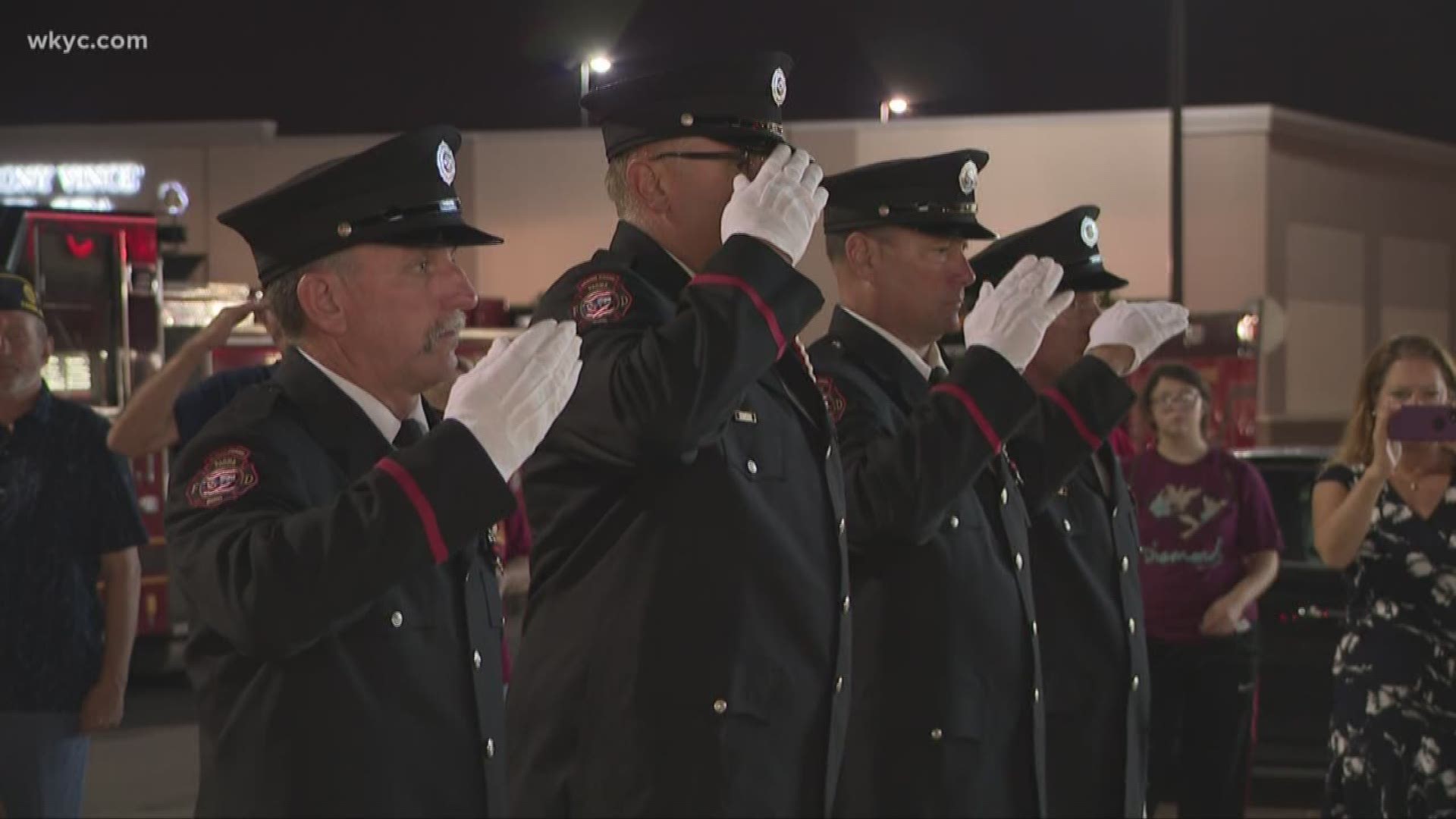 CLEVELAND — On the 18th anniversary of the September 11 attacks, Northeast Ohio and the rest of the country are keeping the promise to “never forget” that tragic day that took the lives of thousands.

For the past 10 days, once the sun goes down in New York City, lights meant to look like the Twin Towers have been beaming into the sky from the fountains that now sit where the towers used to be.

In Northeast Ohio, the City of Parma Fire and Police Department held their own ceremony tonight in remembrance of those we lost that day.

And on social media, people using the hashtag #NeverForget are sharing where they were and what they remember about the moment they learned we had been attacked by members of the Al-Qaeda terrorist group.

For Brian of Cleveland, his most vivid memory was explaining to his kids what was happening.

WKYC viewer Hannah Rose White was a child, herself, at the time.

"I was in kindergarten at State Road Elementary. A teacher came into the classroom and told our teacher what happened. My teacher went on with the day trying to make it seem like nothing was wrong as not to scare or worry us," Rose told WKYC.

"Some kids from the class were picked up early. When I got home, I sat on my mom’s lap in our basement and watched the towers fall on TV. I didn’t understand what was happening but I knew I was was scared of it."

United States Marine Corps veteran Tammy Colson told WKYC she remembers driving in to work in Washington, DC, when she first learned the one of the Twin Towers had been struck.

"My husband was a civilian on a naval base," Colson said. "I called and told him something bad was happening and he needed to find radio/tv.  I listened to WTOP as the second tower was hit and as I approached my office the Pentagon was hit. Chaos."

Laurel Veinfortner Decker shared that she thought she was watching the same video over again when she saw the second tower was also hit.

"[I] thought for sure they were replaying the first tower getting hit," Decker responded on WKCY's Instagram post. "[I was in] total disbelief that it was the second tower."

Lakewood resident Tracey Follina Carlson was traveling abroad at the time, in France.

"My sister and I were on our first trip to Europe. We had just arrived in Paris and checked into out hotel. We turned on the TV at the moment the second plane went into the World Trade Center. We actually thought we had turned on a movie instead of CNN," Carlson told WKYC.

"Once we realized what was happening, we just sat in horror and watched with the rest of the world. That evening, we found comfort at Notre Dame Cathedral. People from all over were coming there to pray. There is a small replica of the Statue of Liberty in Paris and people were placing flowers by it, gathering around it and comforting each other, no matter what country they were from. I can still picture every moment. Prayers to the families of all the victims that day."

Carlson wasn't the only who felt like she was watching a terrible scene straight out of a feature film. Glenn Gresch recalled it being a beautiful day in Cleveland, without a cloud in the sky.

"We had the TV on in our lobby at work as we always did. One of our coworkers ran back and said a plane had flew in to one of the twin towers in New York. We all came out front to catch a glimpse of what was going on. Just a few minutes later the second plane hit," Gresch said.

"We were all stunned not knowing quite what to do. Then the reports came in that the Pentagon was hit and at that moment we knew this wasn’t an accident.

"We all were calling our loved ones to make sure they were watching the news and that they were all right. America was under attack. Then it was like watching a movie, seeing those buildings collapse and knowing that many people just lost their lives in a flash. We continued to do our jobs that day but we did them in a daze and through tears. The world and America would never be the same from that day on."

Cleveland writer Kathryn Nichole was also at work, listening to the radio, when the show was interrupted by the breaking news that a plane had flown into the Twin Towers.

"I headed to the crowded break room and saw on the television the moment when the second plane hit. It was horrifying and shocking," Nichole tweeted to WKYC.

"When I went back to my cubicle, the televisions in the call center were turned on to the news. My manager asked me to keep him abreast of what was happening. When the Towers fell,  the whole room went silent. I was in tears.

"My supervisors gathered together for a quick meeting and announced that we could go home to be with our families. I felt such helplessness and grief for all the lives that were lost on that horrific day. Just thinking of it brings me to tears."

Alan Bonness was watching TV while getting ready to go head into his job at Parma Town Mall when the news broke.

"The streets [were] empty and the bus was empty and so was the mall," Bonness said. "all the TV sets had the coverage on in the mall as everyone talked about loved ones they had joining the military."

Those in the Northeast Ohio area who would like to attend an event in honor of the lives we lost on September 11, 2001, can do so in Parma.

“To honor our Nation and remember the men and women who perished in the devastating terrorist attacks that occurred eighteen years ago today the Parma Fire and Police Departments will conduct a solemn ceremony as humble remembrance of their sacrifice,” Parma Fire Department Public Information Officer T.J. Martin told WKYC.

If it rains, the ceremony will move to the City of Parma Council chambers, at 6611 Ridge Road.