Cleveland city officials met Tuesday in a news conference to provide an update on disciplinary action against the officers involved in the shooting death of Tamir Rice. 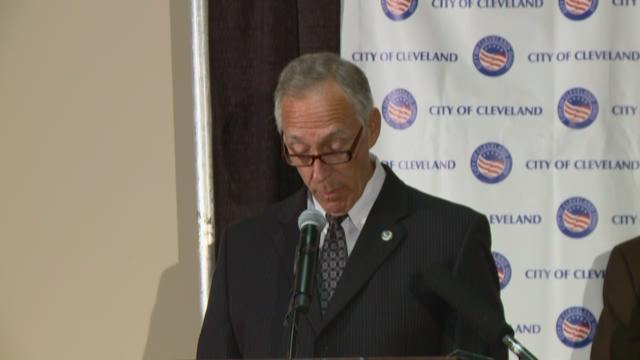 Cleveland city officials met Tuesday in a news conference to provide an update on disciplinary action against the officers involved in the shooting death of Tamir Rice.

During that news conference, officials announced the firing of Officer Timothy Loehmann and 10-day suspension of Officer Frank Garmback.

Rice, 12, was shot and killed by Garmback and Loehmann on Nov. 22, 2014 outside Cudell Recreation Center. The officers were called to the scene on a report of a person waving a gun, which turned out to be an airsoft weapon.

Loehmann will be fired, effective immediately, and Garmback will be suspended 10 days starting Wednesday. He'll also be required to attend additional tactical training.

Officials said the officers did not violate any rules other than failing to inform communications of their position during the moments leading up to the shooting.

However, Loehmann's termination was due to alleged misinformation on his employment application to the department, not his conduct in the shooting.

Mayor Frank Jackson said the city has gone through an "exhaustive process" in determining disciplinary action.

The city's Use of Deadly Force investigation team first responded to the scene. The investigation was later passed on to the Cuyahoga County Prosecutor and Sheriff's officers.

The Prosecutor's office decided not to pursue charges against the officers involved.

A review committee looked at the case until August 2016 to draft a report, which was presented to Chief Calvin Williams. After Williams' review, the report was sent to the Director of Public Safety for administrative hearings on both officers.

Last month, video of the officers' administrative hearings was made public.

Garmback told investigators he didn't know Rice was a child at the time of the shooting while Loehmann told officials, "I thought I was going to die."

The dispatcher who handled the call was suspended eight days for failing to relay critical information to officers Loehmann and Garmback during the incident.

Williams said the department may have discovered Loehmann's application error eventually, but the investigation into the Rice shooting facilitated the process.