If you've been to a major event in downtown Cleveland lately, you may have seen John Keaney. 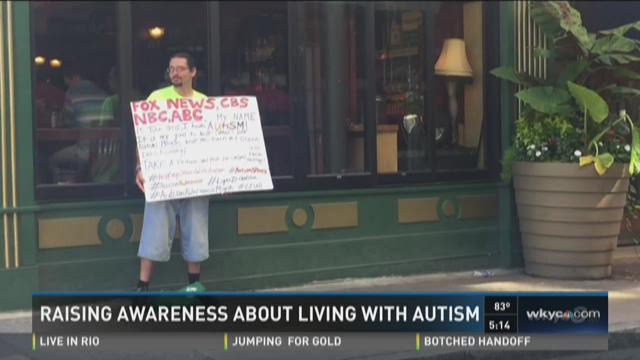 If you've been to a major event in downtown Cleveland lately, you may have seen John Keaney.

Keaney can be spotted outside Cleveland Indians' games and around the downtown area with a large sign asking for help.

His sign says, "My name is John and I have Autism! It is my goal to help others with Autism! Please help me turn my dream into reality."

Keaney first started walking the streets with his sign during the Cleveland Cavaliers' championship parade. He continued during the week of the Republican National Convention and generated enough attention to get social media talking -- and to get some support from the Cleveland police.

It was a meaningful moment for all involved. Keaney was happy to have support from the boys in blue. In return, both officers were happy to offer support, considering both have sons with Autism.

So why is Keaney spending his spare time walking the downtown sidewalks with a giant sign?

Because he simply wants people to understand: John has Autism, but it does not have him.

"Since I began doing this, people have actually asked me, 'You're really Autistic?' My response is, 'Yes.' They always say, 'You don't look Autistic,' and my response to that is, 'What does an Autistic person look like?'"

Keaney wants the world to realize that people with Autism come from all backgrounds and don't fit the stigma that often plagues Autism. He pays his own bills, buys his own groceries and holds two jobs at Dave and Buster's and at a car detailing company.

"They think that we look mentally retarded or disabled in some way," Keaney explained. "They don't really understand that it's a disability in the head. It's not really physical appearance at all. It's a misconception."

Keaney hopes some local celebrities can also help his cause. He's working on reaching out to Drew Carey, LeBron James and Dan Gilbert to help spread his message, and his efforts are starting to pay off.

In the meantime, Keaney hopes everyone can help.

If you see Keaney downtown, say hi. Take a picture of his sign and post it to social media with the hashtags, #HelpingOthersWithAutism, #AutismSpeaks, #AutismAwareness, #LightItUpBlue and #LIUB.