Cleveland Mayor Frank Jackson tells 3News' Russ Mitchell what's next in his life, offers advice to his successor and reveals what he'll miss most

Cleveland Mayor Frank Jackson talks with 3News after deciding not to seek re-election. 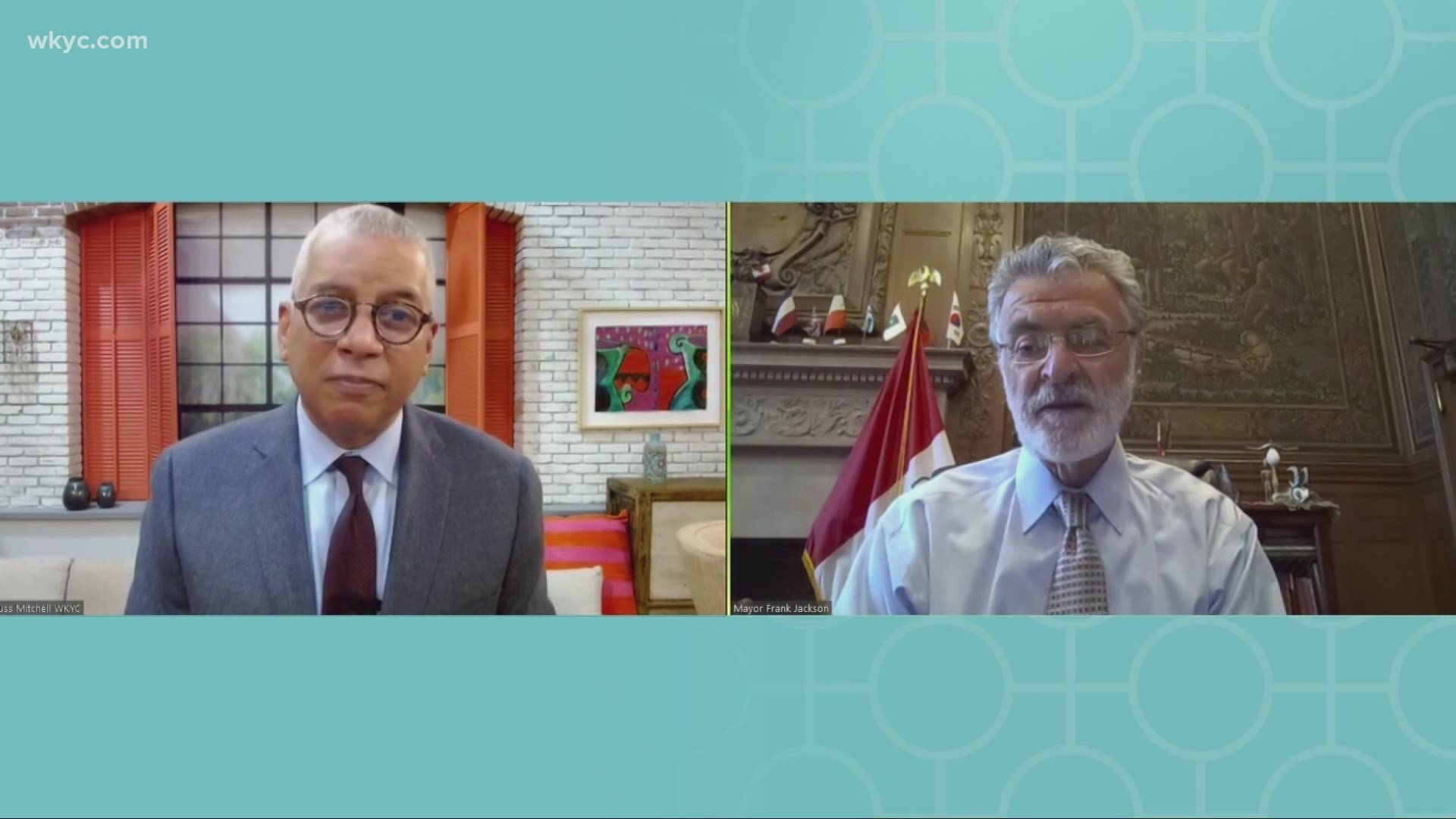 CLEVELAND — Less than 24 hours after announcing he is not seeking re-election this year, Cleveland Mayor Frank Jackson had a one-on-one conversation with 3News' Russ Mitchell about the next steps in his life.

“It wasn’t that difficult," Mayor Jackson said of making his decision. "To be honest with you, it was more difficult the last time I ran because I also contemplated not running then. It was a more difficult decision then."

As for the deciding factors in choosing not to run again, Mayor Jackson tells Mitchell there really wasn't one tipping point.

“You have to remember that I never wanted to be mayor," he said. "It wasn’t my envision to be mayor. My personality is not tied up in the position. I just felt it was time, as I said in my statement, to move on. I fully recognize the issues that I have a passion for are things that would not be resolved even if I did run for another term because these are long-term issues, very core issues that need to be addressed. … It was just time for me to move on. It’s just time. I just felt it was time.”

We streamed the full conversation online, which you can watch in the player below:

Below are highlights and moments from Mitchell's interview with Mayor Jackson...

WHAT'S NEXT IN HIS LIFE?

WHAT HE WILL MISS MOST AS MAYOR

“People. Just the people. Even though many times the decisions and challenges were difficult, that’s just life. … In the process of doing that, you run across people and people who are good people. They work hard, they care and they love the city. They try to do the best they can for the people regardless of who the people are. They have a genuine heart for those who suffer. That’s basically what I’ll miss.”

As for what he'll miss the least? “Managing bulls**t,” Mayor Jackson said while laughing. “Drama explains itself. Just managing BS. Whatever the source and however it comes.”

REFLECTING ON HIS POLITICAL CAREER

Mitchell also asked Mayor Jackson if there is anything he's done in office that he's most proud of. Here's his response: “I don’t think that way," Mayor Jackson said. "I’m not here to write an obituary, so to speak. I’ve got work to do still, and I’m still going to work. I’m not in that mindset. You have to understand how I function. If I get into that mindset and I go to looking at reminiscing or having a legacy, then my mind is completely different – and that’s not a working mind. I’m still in a working mind. There are many things that we as a city have accomplished. Even from last week with the NFL Draft. I didn’t do that on my own. There were many people who participated in that. I was just a cog in the wheel there. I just played my role. We did school reform. I played a more major role in that. We’re working through this pandemic. We’ve balanced the budget in very difficult times. We didn’t go bankrupt during the Great Recession.”

Mayor Jackson made the announcement he was not seeking a fifth term while speaking at a tele-town hall Thursday afternoon.

"I want to share with you that I've decided not to seek reelection for a fifth term. I've led the city of Cleveland as your mayor for almost 16 years. For 16 years, I've worked to stabilize this city, position this city and to ensure that all can participate in the prosperity and quality of life that we've created."

He said it's time to pass the baton, but would not offer any endorsement of who he thinks should be Cleveland's next leader.

When asked if Cleveland's crime rate is a disappointment, Mayor Jackson offered this reply: “Of course it is. It’s a disappointment to me if one person gets robbed. If there is one carjacking. If one person was killed, or one young lady was sexually assaulted. That’s a huge disappointment to me. It bothers me. I work at it because I know the victims of and I also know the perpetrators of. So I work at this stuff, it’s personal to me. Just because you don’t see me expressing it or demonstrating it in the way that other elected officials would do doesn’t mean that I don’t see it and feel it and know it. So, yeah I’m disappointed. I’m constantly disappointed in it because that’s the lives of people. It’s the lives of people, individuals, families, communities.”

WHO WILL BE THE NEXT MAYOR OF CLEVELAND?

His announcement comes as the mayoral race heats up with multiple candidates vying to win the role. The following have formally announced their mayoral bid:

Former congressman Dennis Kucinich, who also previously served as Cleveland's mayor, has not yet announced his decision on running for the job. He did, however, tell 3News' Mark Naymik that he's seriously considering it. He also filed paperwork last December that allowed him to raise money for the Cleveland mayoral race.

ADVICE TO HIS SUCCESSOR

“Stay on your game. If you come into this game wanting to be mayor, or if you come into this game using the position of mayor as a stepping stone then you’re going to fail. If you come to the game with the intent to do right by the people and do right by the city, you’re not going to get all the credit and you’re going to get criticized a lot for that and many times by the very people you’re trying to help. Don’t come here looking for praise, come here to do the work. If you’re not willing to do the work and put the work in, then you’ve got the wrong job.”

Here's reaction to Mayor Jackson's announcement that he's not running again this year: