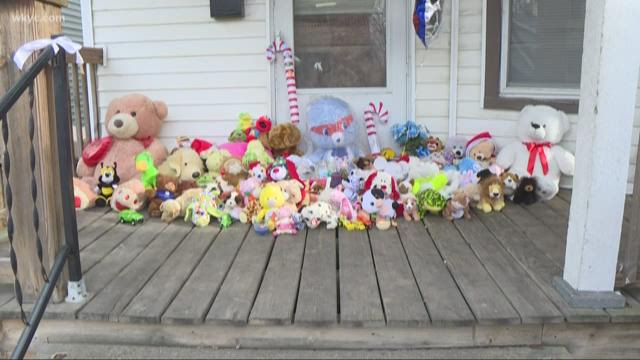 The gifts left at a home on West 80th Street near Detroit Avenue on Thursday were not for Christmas, but rather, a little boy who will never wake up.

Jordan Rodriguez would have been 5-years old. His mother, Larissa Rodriguez, has been charged with his murder.

“He's in a better place,” said Miriam Torres, a neighbor who knew the family. “A lot people loved that little boy and his brothers and sisters.”

Investigators found the boy's remains in the backyard of the home earlier this week after a 911 tip from Pakistan led them there. A man had called to say that his brother, Christopher Rodriguez, confessed to burying the child with Larissa, his girlfriend.

“I'd seen her before with her kids and heard stories, but didn't believe it,” Torres said. “She's a young mother.”

The boy was developmentally-disabled and found with signs of abuse, including broken ribs.

In addition to the murder charge against Rodriguez, a grand jury will also review charges of felonious assault.

They say Christopher Rodriguez will likely also be charged. He is currently in custody for not paying child support.

It all follows a nearly two-decade history between the mother and Children and Family Services involving abuse and neglect.

Records reveal that four of Larissa's nine children had to be removed. A child was once found eating a sandwich with cockroaches.

New documents released Thursday listed a date of death for Jordan Rodriguez as September 22nd but did not list a cause. They also revealed that Larissa led police to the corpse.

Relatives tell Channel 3 News that she is pregnant again. She is due in court on Friday.