The video shows a huge crowd dispersing outside the Justice Center, plus two vehicles on fire during the unrest. 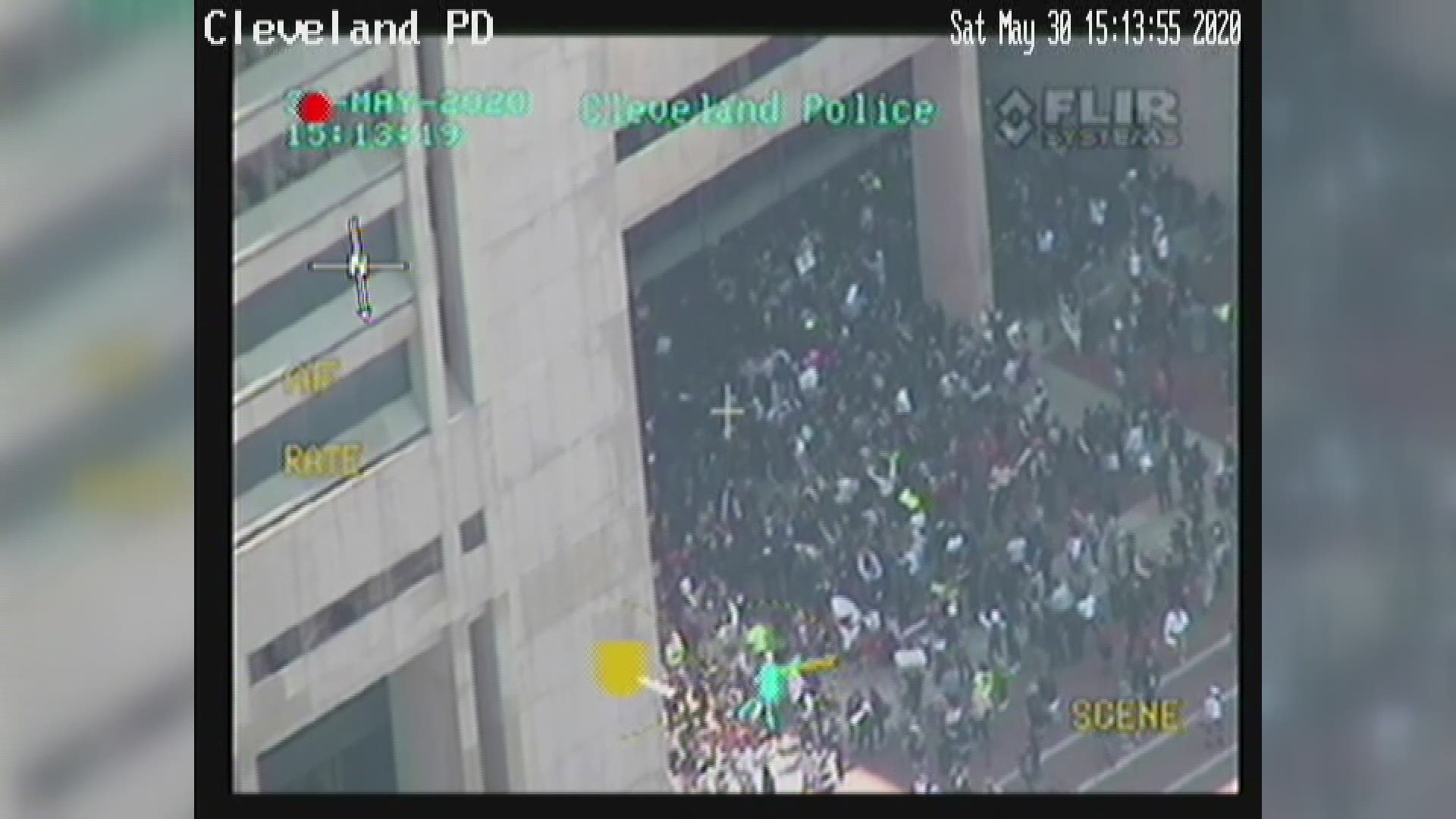 CLEVELAND — The Cleveland Division of Police has released aerial footage showing some of the unrest that took place following the George Floyd peaceful protest on May 30.

At 3:13 p.m., helicopter cameras showed a huge gathering in front of the Justice Center that dispersed quickly.

At 4:45 p.m., officers in the helicopter can be heard asking for fire crews to provide assistance for vehicle fires outside the Justice Center, as well as on Ontario Street.

At 6:25 p.m., the helicopter is looking over damage done to cars in a parking lot near Lakeside Ave. and W. 3rd Street. Minutes later, the attention of officers in the chopper is on Public Square as a mass of people gathered outside of Jake's Pizza.

Finally at 8:48 p.m., cameras show a line of people marching down Euclid Avenue.

You can see the aerial footage in the player above.

Dozens were arrested as a result of the violence on May 30. Four people face federal charges, including 19-year-old Timothy James Goodner, of Maple Heights, who was indicted for setting a parking lot attendant's booth on fire on Thursday.

Tandre Buchanan was arrested on June 12 for his role in the damage done to Colossal Cupcakes. That same day, 23-year-old Brandon Althof-Long and 22-year-old Devon Bryce Poland of Erie, Pennsylvania, were both indicted on rioting and firearms charges.

RELATED: Man arrested for alleged role in Cleveland ‘civil unrest’ amid May 30 protests

Last week, Cleveland Mayor Frank Jackson announced that the unrest that came following the George Floyd demonstration will cost the city over $3 million in overtime. Jackson says the majority of the expense came as a result of public safety needs, but other departments like streets and parks also had employees work overtime.

RELATED: Cleveland Mayor Frank Jackson: Social unrest on May 30 will cost city over $3 million in overtime

Also last week, Jackson’s administration was scheduled to hold an “after incident review” to discuss how the city responded to the protest and riot. The city’s respons has drawn criticism for the widespread rioting and looting in the central business district that followed demonstrations earlier in the day.

Asked by council members last month why the city didn’t seem ready for rioters, Cleveland Police Chief Calvin Williams said police prepared for what they believed would be a largely peaceful demonstration.

“A lot of bike officers were in Class B uniforms, that our normal uniforms of the day,” he said. “We weren’t in helmets and shields and protective gear because that is how the rally was billed from the beginning. That was our response from the beginning. We were not there to antagonize people, but we did have officers in protective gear that were not seen and ready to respond.”

Jackson has said he has his theory of what happened that day but planned to wait to hear from police supervisors before publicly discussing what lessons the city could take from the day.

“I don’t want to get ahead of the police,” Jackson told 3News during a recent teleconference.

Jackson’s also said during a separate interview that he personally would not have changed how he approached the day.

"I wouldn't do anything different," Jackson told 3News anchor and Executive Editor Russ Mitchell. "I'd do exactly what I did: I'd go down to the command center and I would do my proper role...to provide support for law enforcement, as we did in the aftermath of what happened that Saturday night."

RELATED: Audit says RTA board member and Mayor Frank Jackson aide Valarie McCall should not have received $57,200 in compensation