The latest: Investigation continues after Cleveland police detective shot & killed on west side

A possible informant also died from his wounds. Three people are in custody. 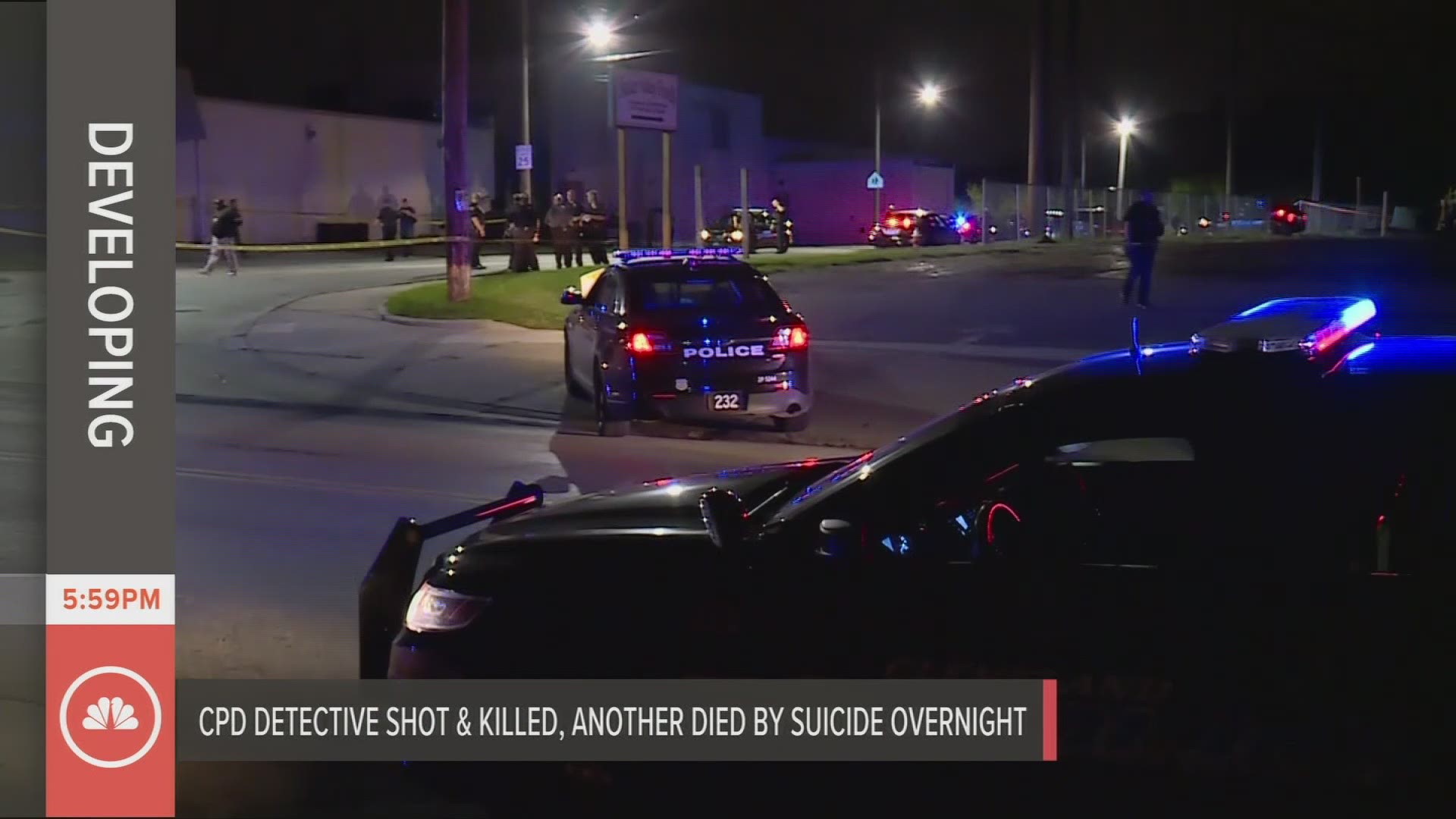 CLEVELAND — Northeast Ohio is mourning the death of a Cleveland police officer who was shot and killed in the line of duty Thursday night.

Three arrests have been made in the case, according to the Cleveland Division of Police. No charges related to the officer's death have been filed at this time.

Below is a breakdown of everything we know so far.

WHO IS THE OFFICER?

He has been identified as 53-year-old Det. James Skernivitz, a 25-year veteran of the Cleveland Police Department. He was pronounced dead around 10:30 p.m. Thursday. The Cuyahoga County Medical Examiner's Office said the cause of death was a "gunshot wound of trunk with injuries of heart, great vessels and lungs."

Cleveland Mayor Frank Jackson, Police Chief Calvin Williams and Director of Public Safety Karrie Howard hosted a 3 p.m. press conference with new updates in the case. You can watch the full press conference in the player below:

"It takes a special kind of courage to be a police officer. Our men and women in blue put their lives on the line day after day in order to keep us safe. We will not forget Detective Skernivitz and his life of service and sacrifice. I send my heartfelt condolences to his wife, children, and family."

Skernivitz also served as an officer at Progressive Field, according to Curtis Danburg of the Cleveland Indians.

"Tonight, we will fly the flag at half staff and have a moment of silence in honor of @CLEpolice Det," the Indians tweeted shortly after 2 p.m. "James Skernivitz, who was killed in the line of duty. We are deeply saddened by the passing of Det. Skernivitz, as he spent many years at Progressive Field keeping fans safe."

Tonight, we will fly the flag at half staff and have a moment of silence in honor of @CLEpolice Det. James Skernivitz, who was killed in the line of duty.

We are deeply saddened by the passing of Det. Skernivitz, as he spent many years at Progressive Field keeping fans safe. pic.twitter.com/haNzIi5MLD

Join us in paying tribute to Det. Skernivitz by leaving your thoughts and comments in the post below. Thank you for your service.

Those who knew Det. James Skernivitz say he was a great cop and even better person “Jim was like my older brother. I followed him into law enforcement... I’m devastated by this news. Jim was a family man, beyond reproach.” @wkyc #FallenOfficer #RIP #Cleveland #CLe

Police confirm three "persons of interest" (two juveniles and one adult) were taken into custody on charges not related to Skernivitz's death. The investigation remains ongoing.

Police say the shooting took place around 10 p.m. Thursday, Sept. 3, in the area of West 65th Street and Storer Avenue.

WHO IS THE SECOND PERSON KILLED?

A second person was also killed in connection with this incident. He has been identified as 50-year-old Scott Dingess, according to the Cuyahoga County Medical Examiner's Office. He died at 10:43 p.m. Thursday.

Dingess was facing aggravated theft charges and was free on bond when he met with Skernivitz, 3News' Phil Trexler reports. It is not yet clear why the two men were together when the gunfire erupted. His bond was set July 31 in Cuyahoga County Common Pleas Court. His attorney, Bryan Byrne, did not immediately return a call for comment. Court records show Dingess has a long history on criminal cases dating back at least to 2009, according to online court records in Cuyahoga and Lorain counties. The cases generally involved drug and theft charges, records show.

In 2017, WSAZ in West Virginia reported Dingess was charged "after he allegedly hit a woman with a vehicle after she tried to stop him from leaving a store after shoplifting." According to their report, Dingess later admitted that his wife was trying to steal from the store, and she was arrested.

Watch 3News' extended coverage, which was done prior to any arrests being made in the case:

WHAT ARE OFFICIALS SAYING?

The Association of Cleveland Firefighters Local 93 posted the following message on Twitter shortly before 9 a.m. Friday:

The Association of Cleveland Firefighters Local 93 stands in solidarity with our Cleveland Police brothers & sisters.

We send our deepest condolences, for the horrible loss of Officer Skernivitz.

We mourn alongside you.
  pic.twitter.com/3mN0KYRoE9

Ohio Gov. Mike DeWine has also ordered flags to be lowered to half-staff in honor of Det. Skernivitz. This includes flags at all public buildings and grounds throughout Cuyahoga County and at the Ohio Statehouse in Columbus. Flags will remain lowered until sunset on the day of Det. Skernivitz's funeral.

Anybody with information in this case is asked to call the Cleveland Police Department at 216-623-5464 or 911.

The Cleveland FBI has established a 24/7 tip line for anybody who might have information in the case. That number is 216-622-6842. Tipsters can remain anonymous. Reward money is available for information that leads to the successful identification and prosecution of those involved.

Guests wishing to pay their respects to Det. James Skernivitz and his family will be received from 2-8 p.m. Thursday at A. Ripepi and Sons Funeral Home in Middleburg Heights. A Catholic Mass of Christian Burial will follow on Friday at the Cathedral of St. John the Evangelist in Cleveland, although an exact time still has not been determined.

A hearse carrying the body of Skernivitz drove through the city streets Saturday on its way to the funeral home, under a large American flag hoisted to the sky by two fire truck ladders. Multiple first responders, including those from the Cleveland Divisions of Fire and EMS, stood at attention.

Today, Cleveland first responders including Divisions of @ClevelandFire and @ClevelandEMS joined us as Detective James Skernivitz was escorted to the funeral home. Detective Skernivitz was killed in the line of duty on Sept. 3, 2020. @CityofCleveland pic.twitter.com/fCafyCk90Y

NOTE: We are updating this story as new details come in. Please refresh this article to see the most-recent information.