Officer Aaron Petitt wants to restore his name and not be known as 'the racist police officer.' 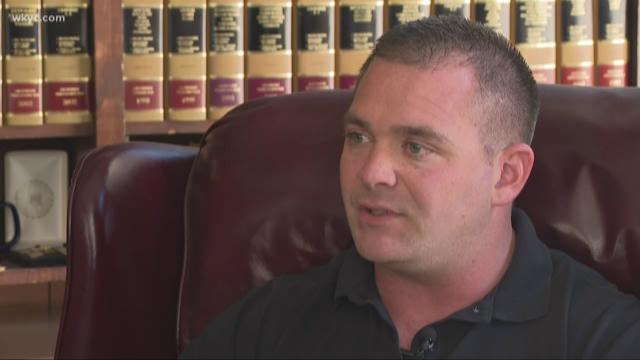 Cleveland — He says the city violated his right to free speech.

The officer suspended by Cleveland Police for using what they deemed an offensive word toward Muslims, now plans to file a lawsuit.

Officer Aaron Petitt spoke exclusively to Channel 3 about the text message he sent saying, "It just wasn't something I ever knew to be offensive."

The decorated war veteran says he began using the word 'Haji' during his 4 tours in Afghanistan and Iraq.

By definition it means someone from Iraq, and is based on the Arabic word "al-haj," which means one who traveled to the holy city of Mecca.

But it can also be used as a negative term for Arabs, something Petitt says was never shared by Army supervisors.

"We were not only instructed to use the word Haji but we were told using the word was a base level of respect to find out who to go to," he explained.

Regardless of how he meant it, in a pre-disciplinary letter we obtained from the CPD, Petitt is accused of using “disparaging remarks when referencing an Arabic Male” and was suspended for six days without pay.

The incident began outside the Hustler Club, when Petitt got a text on his personal phone from another officer about "Middle Eastern males" causing problems.

We asked to see the actual text, but Petitt’s attorneys never shared it, only saying he replied with something to the effect that he had no problem fighting a Haji.

"If someone took offense to it, you know what, I do apologize for that," Petitt told us.

Petitt's attorney says, free speech aside, the fact that Haji has more than one meaning indicates the city of Cleveland jumped the gun.

But the bigger issue is that the message was found during a separate investigation into the officer he was texting with. That investigation revealed racist texts sent by a third officer, Detective John Kraynik.

For that, Detective Kraynik only had to go to sensitivity training.

Petitt’s attorney, Jared Klebanow, told us, "Officer Petitt did not use the ”N” word. So, to lump him in with somebody who has chosen to use that word is simply unfair."

As for Officer Petitt, while he wants those 6 days he lost back, he says what's more important is getting his name back, "And not be known as 'the racist police officer.' I am just not."

It's important to note the officer spoke to us as a private citizen, and is not representing the city or the Cleveland Division of Police.

A member of a National Islamic Relations Group we spoke to said he believed the word was likely disparaging, given the context in which it was used.