'I went from not being able to afford to eat or clothe myself to getting three meals a day. I had an instant family. I had something to be proud of every day.' 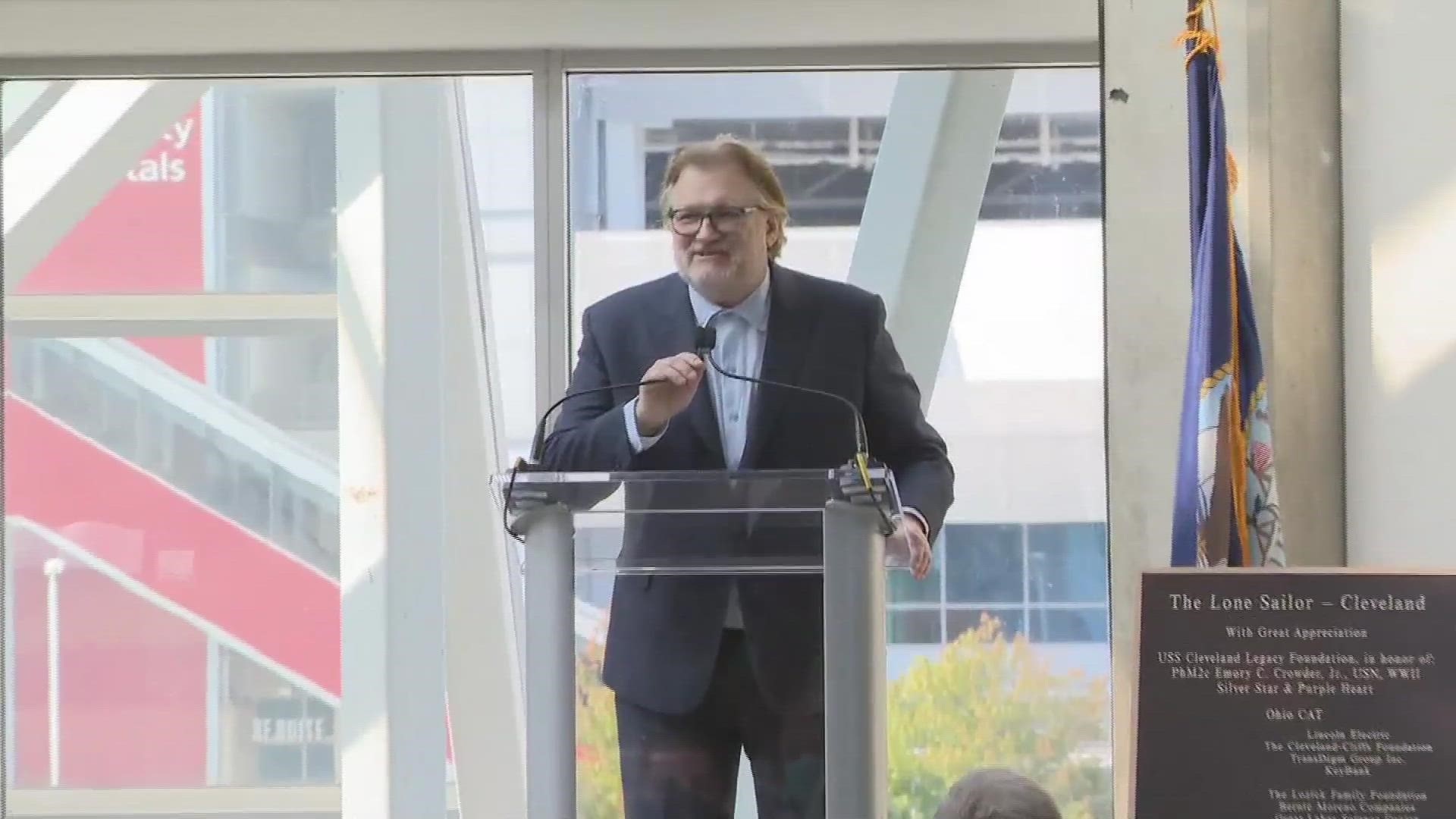 CLEVELAND — Drew Carey has always been known for his love of Cleveland, comedy and his various TV roles. But did you know he also served in the military?

The Price is Right host was back home in Cleveland for a special ceremony Friday to unveil the Lone Sailor Statue at the Great Lakes Science Center as he discussed his time with the Marines.

“I play down my time in the Marine Corps all the time,” Carey said as he addressed the crowd before the statue’s unveiling. “I was just in the reserves. I never fought in combat. I was never in danger.”

Carey said he was probably at the lowest point of his life when he joined the Marines.

“I had been living in Las Vegas in a motel that cost me $55 a week that they overcharged me for,” he laughed.

He had also just totaled his car and lost his job.

When he returned to his car the next day, he discovered the windows were smashed.

“They stole everything I had in there. High school yearbooks, love letters from my first girlfriend, picture albums, all these memories of things I’d want to save and enjoy in my life I don’t have anymore; all gone in a day. All I literally had was the clothes on my back and I had a little backpack thing with maybe deodorant and toothpaste in it so I could spend the night at my friend’s house. That’s all I had to my name. And a wrecked car.”

His life then took him to his brother’s home in California.

“Him and his wife cooked for me. They gave me food. He had to buy me underwear and socks and shirts and completely outfit me.”

Carey said his brother also gave him a job delivering parts at the auto shop where he was working. But that, too, didn’t work out.

RELATED: Drew Carey donates $5,000 to Camp Y-Noah in Green after tweet asks him for help amid COVID-19 pandemic

“The owner found out that I was working there and he made my brother fire me because he didn’t want a relative to work for a relative delivering parts because it would be too easy to steal from him.”

That’s when Carey turned to the Marines.

“I was like, ‘Well, I guess it’s time for me to join the military’ because that’s all that I could think of. I dropped out of college. I didn’t have any job skills, really. I showed up at the recruiting office. … So I joined the Marine Corps. and that was it.”

Carey reflected on how much he loved the experience.

“I went from not being able to afford to eat or clothe myself to getting three meals a day. I had an instant family. I had something to be proud of every day. I was part of an organization with a history. I was accepted into this brotherhood of people that have done important things and stood for something. Me, little Drew Carey from Cleveland, Ohio, that couldn’t afford anything and was broke and had to mooch off my brother, was part of this thing. I didn’t have to depend on anybody anymore except the people around me. I was wanted and needed and I never forgot that, what the Marine Corps taught me. They taught me to have pride in myself. They taught me to be responsible, to take care of people, all the good things you learn in the military that are great.”

RELATED: Drew Carey wins more than $55,000 for the Greater Cleveland Food Bank during appearance on "Celebrity Wheel of Fortune"

Carey’s return to Cleveland on Friday comes just a few weeks before he's set to receive a Lone Sailor Award from the U.S. Navy, which are given to those “who have drawn upon their past military experience to become successful in their lives and exemplify the core Navy Memorial values of honor, courage an commitment.”

The U.S. Navy Memorial highlights Carey’s time in the military as follows: Drew enlisted in the Marine Corps Reserves in 1980 and served until 1986. His Primary MOS was 2531 Field Radio Operator and he last served with 3rd Battalion, 25th Marine Regiment. He separated at the rank of Sergeant. Mr. Carey still supports the troops and does overseas touring with the USO.

Moments before the Lone Sailor Statue was revealed, Carey summed up the experience with this powerful sentiment: “When you’re in the service, any small thing means a lot.”