"A gloomy day in New York City is still better than a sunny day in Cleveland." Oh, really? 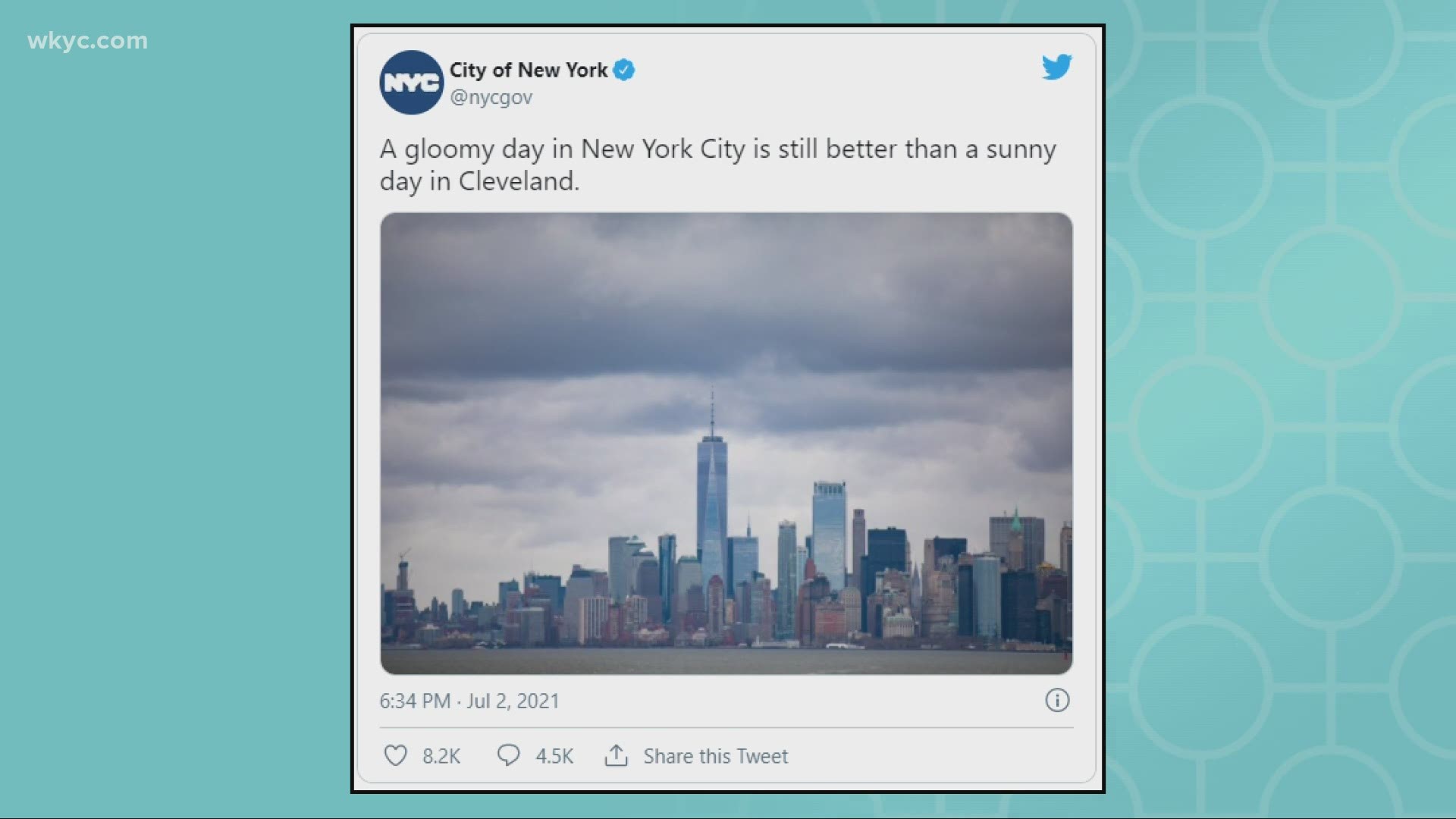 CLEVELAND — So here I thought that I was going to have an easy, stress-free Friday night as we make our way towards a holiday weekend.

Then I saw a bunch of my friends react to a very strange tweet as the city of New York took a below-the-belt shot at our city of Cleveland.

So here's what we know: At 6:34 p.m. on Friday, the official Twitter account for the city of New York (@nycgov) put out the following: "A gloomy day in New York City is still better than a sunny day in Cleveland."

A gloomy day in New York City is still better than a sunny day in Cleveland. pic.twitter.com/pJC6hDdMvz

But instead of me getting angry and firing back, I thought it would be more fun to go and sample of some of the witty responses I've seen on Twitter. Believe me, it's therapeutic!

I love @nycgov..but this is meaner than a rat stealing pizza on the subway! https://t.co/ICdj3UFBTj

Brandon Simmons wasn't having any of this, either!

Mannnnn. The lies! I’ve been to NY. Not impressed. @TheCLE Please handle this!!! https://t.co/d6z589gFjC

Don't make Ken Carman angry. You won't like him when he's angry.

This is cheap and disgusting. Whoever is behind it, correct yourself. https://t.co/ITiYHlLBDn

At least our football team plays in the city/state it's named after. https://t.co/BYTR0A92tB

U.S. Senate candidate Bernie Moreno (R-OH) might have racked up a few more potential voters with this tweet.

Whomever is running this Twitter account has been walking around the streets of NYC too much today and may have gotten stoned from the constant smell of drugs in the air. Cleveland > NYC any day! @CityofCleveland https://t.co/MpbpQmxa4L

Keep it up, Gotham. Your huddled masses, yearning to breathe free... they’re learning to escape from New York #DefendTheLand https://t.co/lm4kHvbXRr

We've got more! The city of Sandusky busted out a LeBron James GIF in response.

I saw a bunch of responses like this one:

At least we know who our mayor is. https://t.co/VU4Vx1FG8A

Here are a few more:

Cleveland, Ohio? Home of the Rock and Roll Hall of Fame? Maybe go down to Canton to the Pro Football Hall of Fame? Have you ever seen a Cuyahoga sunset? SMH 🤦🏼‍♀️ @KingJames https://t.co/BGbAS5vehZ

When I was in college the first kid from NYC I met asked me what time zone Cleveland was in. His face when I said “yours.”

So many New Yorkers have no idea what the rest of the world has to offer. They don’t know what they don’t know. 🤷‍♂️ https://t.co/w32h146cr2

Looks like the @nycgov social manager got reminded today that Cleveland has a major pro sports title in the last nine years and NYC doesn’t. https://t.co/wSR3FFDdzx

I grew up in Cleveland and live in NYC, and this is rude and hacky. https://t.co/3ONiPY6N7U

And to cap it off, yes Destination Cleveland, the city's official tourism agency, is aware of the tweet.

Don't mess with us, New York! And enjoy your July 4 holiday, everyone!