Scott Mowery is combining his love of trivia and the challenge of running to help the cause. 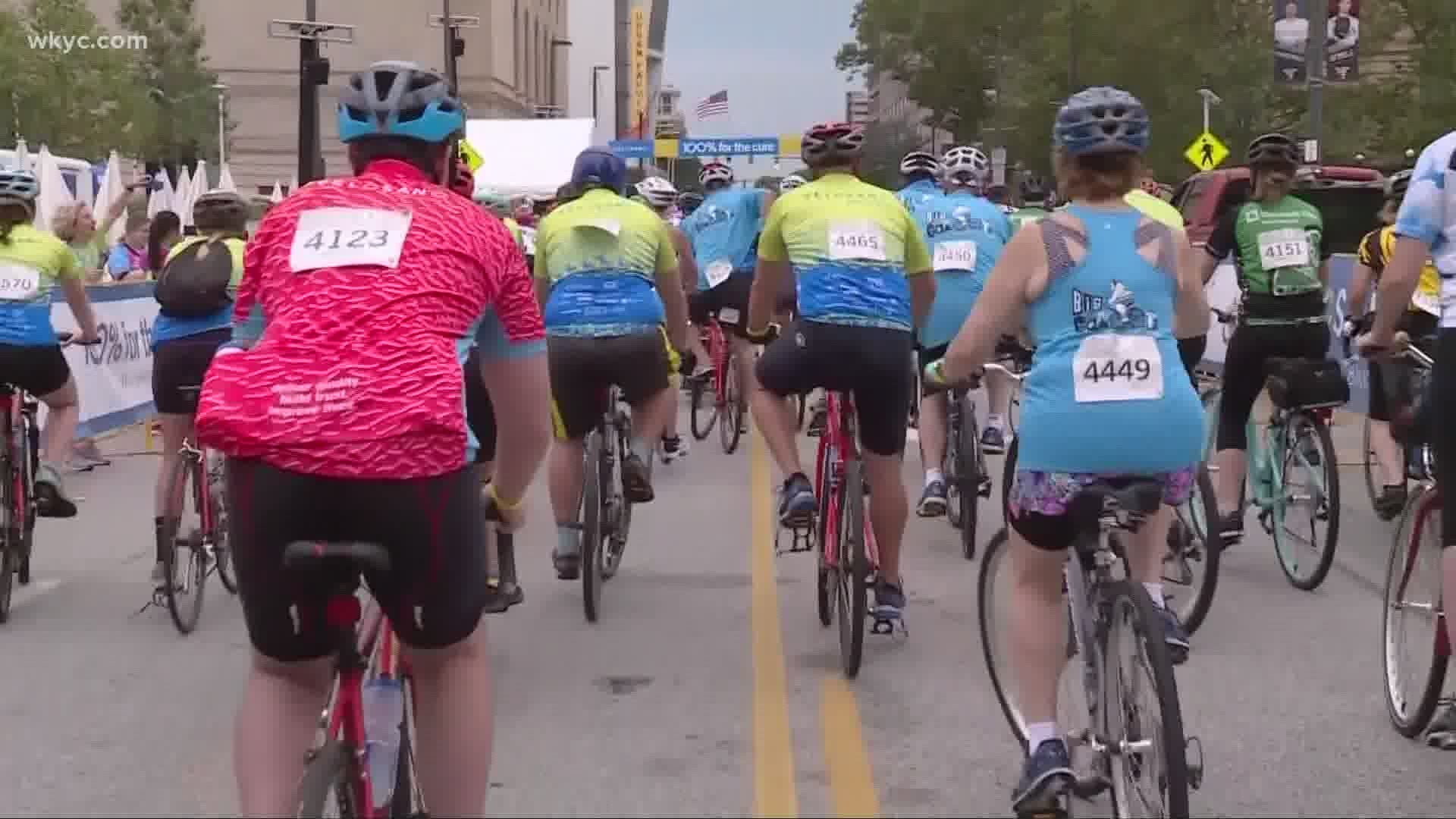 CLEVELAND — As it has with countless other events, the coronavirus pandemic forced Northeast Ohio's big cycling weekend to detour. The annual Cleveland Clinic event may be virtual this year, but its new options are making it even more accessible.

This year, no bicycle is required. Participants can walk, hike, swim, scooter or even garden to take part.

Or in the case of Scott Mowery, combine a love of trivia and the challenge of running to help a cause very dear to his heart.

Back in 1998, Mowery had just started dating his then-girlfriend, Chris, when he went to the doctor. Frequent sinus infections aggravated him, and then there was the strange lump on his neck.

Credit: Scott Mowery
Just a few months after they started dating, Scott Mowery was diagnosed with Hodgkin's Lymphoma. Chris stayed by his side through a year of radiation and chemotherapy. The next year, they got married.

His doctor concerned, ordered tests, and then delivered the gut-wrenching news. At just 26, Mowery had stage 3 Hodgkin's Lymphoma.

"It was something that at that age, you don't think, there's no way you could possibly have cancer," Mowery recalled.

For the next year, he underwent chemotherapy and radiation. It brought him closer to Chris. Mowery's parents also accompanied him to treatments at the Cleveland Clinic, remaining by his side every step of the way.

"If (Chris) could put up with me while I'm having bad days during my treatment, or feeling sick and not quite, you know, looking my best, I figured she's a keeper," Mowery said.

In 1999 Mowery's cancer went into remission. Toward the end of 2000, Chris became his wife. In saying their "I do's," the couple had already been through "in sickness and in health."

Credit: The Mowery Family
Just three days after announcing her retirement, and with big plans to enjoy a new home with her husband, Linda Mowery learned she had small cell lung cancer. Doctors gave her just a few months to live. She fought for two years, spending as much time as she could with family and especially grandchildren.

But sadly, for the Mowery's, cancer would eventually bring more heartache. Three days after announcing her retirement, Mowery's mother learned she had cancer.

"Her doctor told her initially to get her affairs in order because she probably had less than five months to live," Mowery said. "He was very blunt with her. And she ended up kind of using that as motivation to really fight. And she was remarkable in that way. She fought for two full years."

It was two years she spent making the most of time with her children and grandchildren.

Today, Scott Mowery continues the fight. His approach? Don't focus on why or how you got cancer. Focus on what you can do about it.

"I looked at it as I wanna fight it. I want to get rid of cancer completely. With VeloSano, to me, it gives you hope."

He sees VeloSano as the vehicle to find that cure. 100 percent of all money raised stays right here, at the Cleveland Clinic, every cent for research, clinical trials and cancer treatments.

Mowery is on team "Make It Rain For A Cure." He is hosting online trivia night and running, too. On Saturday he'll tackle his second 10K since he's been in remission.

"The fact that we have a pandemic going on right now and they're still getting all these people to do things to raise money, raise awareness and help fight towards getting this cure with additional dollars for research, it's really inspirational. I mean nothing is stopping them from continuing to push forward and fight for this cure," he shared.

Virtual VeloSano “Day” on Saturday, July 18, will feature a simulated starting line to kick off the day, virtual group photos, and will engage participants across the globe riding or working toward their activity goals, in part, by using #VirtualVeloSano on social media to share their stories.

In addition to providing unique and meaningful ways for everyone to get involved virtually, VeloSano has removed the obligation in 2020 to meet fundraising minimums. Participants can start or join an existing team and register as either a “Rider” or a Virtual Fundraiser. If registering as a “Rider," participants will select a distance, similar to how they would register for the traditional ride.