A murder-suicide happened inside a local Burger King on the west side of Cleveland around 8 a.m. Tuesday. 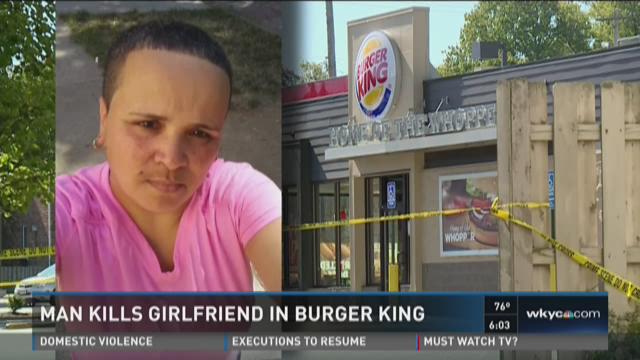 A murder-suicide happened inside a local Burger King on the west side of Cleveland around 8 a.m. Tuesday.

Witnesses say a man showed up while his girlfriend was working, shot and killed her and then killed himself. It all happened at the fast-food restaurant on the corner of W. 110th Street and Lorain Avenue.

As of Tuesday evening, the Burger King remained closed and crime tape prevented people from entering the parking lot.

“She did not do anything and did not deserve it,” said a former Burger King manager.

Coworkers ask why as they sit within sight of where their friend was killed.

“I did not expect this or anything because she said she had left him,” said a former Burger King manager.

"He jumped over the counter and did not care that she was bleeding just kept shooting,” said Tracy Cypatton.

And then, we are told he went into the women's bathroom and killed himself.

Friends say he was the father of their three kids.

"Everything that she did was about her kids,” said a former Burger King manager.

"She was really dedicated in karate with her kids,” said employee and Erlyn’s co-worker, Amanda Bernes.

Erlyn worked at this Burger King for about eight years.

"Very dedicated worker,” said Bernes. “She would give you the shirt off her back if she could. She was a great friend."

"She made everybody laugh,” said a former Burger King manager. “She joked around at work. Made the day easier to work."

Coworkers say Aviles just came in the other day and everything seemed fine between the two.

"They argued a lot and that is one of the reasons she wanted to get away,” said a former Burger King manager.

Never did they think, once she got away, it would end like this.

"We will just remember Erlyn and who she was,” said Bernes. “And she will always be a part of us. She is this Burger King."

This is also the same Burger King where Amanda Berry worked. Ariel Castro abducted her while she was walking home from work more than 10 years ago.

This incident took place on the same morning that the city of Cleveland kicked off National Domestic Violence Awareness Month at City Hall.

Cleveland Police Chief Calvin Williams brought up his phone and referred to the murder suicide at the Burger King during his speech.

According to Linda Johanek, Chief Executive Officer of the Domestic Violence and Child Advocacy Center, murder suicides tend to be triggered by domestic rejection, withdrawal, or estrangement.

Josh Sugarman with The Violence Policy Center did a study last year and found there are 11 murder suicides a week nationally, which would be about 1,200 a year.

Also, the National Coalition of Domestic Violence figured 72 percent of all murder suicides involve an intimate partner and 94 percent of those victims are women.