Cleveland police officer and local barber Antonio Andino got to enjoy the experience of a lifetime this week. 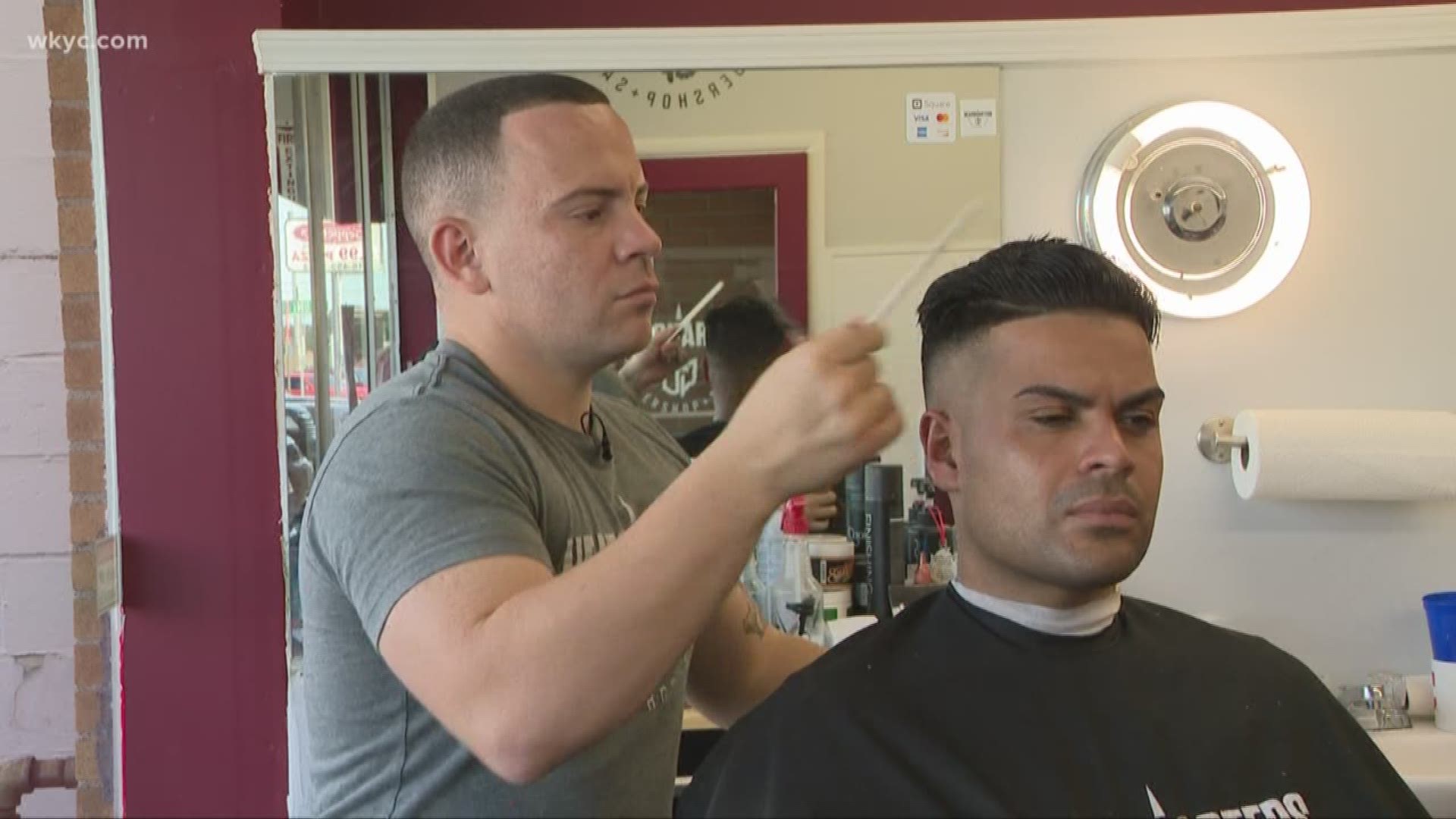 The Air Force Thunderbirds put on a quite a performance for this year’s Cleveland Air Show crowd.

But the team also provided the trill of a lifetime for one man, honored as a Hometown Hero.

A lifelong Clevelander, Antonio Andino is changing lives through his work in not just one profession, but two. His ultimate goal is to give flight – to the dreams and potential – found in the children he encounters.

A steady stream of customers takes a seat in one Brooklyn barbershop, for an experience equal parts cut and conversation.

“I’ve spent a lot of hours in this chair. He’s just a great barber. He gives really good haircuts. The atmosphere is great. And you know when you have a great haircut, you feel good. Gets me through the week. I look forward to coming in,” said Emmanuel Colon, a longtime customer, friend and Cleveland firefighter.

Antonio Andino started cutting hair while in high school. By age 18 he had his license, which he proudly points to when we visited him. The photo is a testament to his passion at an early age. “I just go back and look at this picture when I got my license, I was pretty young. A young kid.”

His easy-going personality makes Antonio a natural as a barber.

“This isn’t work to me. This is therapy. It’s fun. You talk sports, you talk life, meet great people. Its’ a great time. I met a lot of good people behind this chair,” he said.

Some of those great people convinced Antonio that he was fit for another profession too. As a Cleveland police officer.

1 / 10
Lindsay Buckhingham
Officer Andino’s family and fellow officers are there to cheer on his flight.

“We come out here and hang out with the kids, hand out at the schools, the rec centers. Just break the ice and try to get a first encounter with the kids, so that their first impression, instead of it being a negative one, it could be a positive one,” Andino said as we met up with he and his partner at a playground.

His role is to build a relationship that bridges that gap between police and the community.

“You hang out with them, pop up at the park. See how they are doing. Go to their house and see what quality of life issues they have. There’s certain kids I’ll go check on them at the schools. And I’ll tell them, you know, ‘I’m gonna come back and check on you’,” he said.

And then there are those occasions when lines between badge and barber face away, as Antonio Andino cuts hair for free, in uniform.

We caught up with him at a Back To School event in early August, held at a parking lot of Harvard and Lee.

“I love this. I’m a Cleveland Police Officer, but this is an ice breaker. So I am able to get kids in the barber chair, talk to them, communicate with them, let them know that they get to know me outside this uniform.”

His influence goes further than finding out about their favorite music, hobbies and school.

‘I’ve been blessed to be able to help the kids, introduce them to policing, but also get them in to barbering. I am able to help them, let them know about our recruiting offices, that we are hiring, but I am also able to recruit for the barber college. Tell kids that there is a lot out here. You don’t have to go to college, you can go to barber school or a police academy. There is a lot out here,” Andino explained.

Cleveland born an raised and a proud public servant, Andino has shied away from recognition. But the U.S. Air Force saw things differently, proclaiming him a Hometown Hero, making this officer and barber an honorary Thunderbird for a day.

Before he could climb into the F-16 Fighting Falcon, Andino had to take part in several briefings, including training that would help him prepare for G-forces that would test his body.

“It’s pretty intense and definitely a work out. Particularly on those lower extremities. We are going to teach you what you need to do to fight those G’s,” explained Major Ray Geoffrey, the Public Affairs Officer for the U.S. Air Force Demonstration Squadron, also known as #12 for his position on the support team.

After a few hours of waiting, a medical briefing and changing into his “g-suit” which helps prevent blood from pooling into the feet and legs, Andino is ready to go.

With family and fellow officers looking on, he ventures into unfamiliar territory, soaring into the sky as the F-16 pushes 29,000 pounds of thrust.

Andino keeps his own promise, not to pass out, and even takes the stick for a quick maneuver.

A Thunderbirds flight that lives up to expectations and ends with a celebration back on the ground. “This is a once in a lifetime opportunity,” Andino remarks as he climbs down from the F-16.  A lifetime of opportunity Antonio Andino sees as his calling, to share with the community he serves in the city that he loves.

“I appreciate the recognition. It’s wonderful, but I am just doing my job. That’s it. I’m blessed to bless others,” he said.