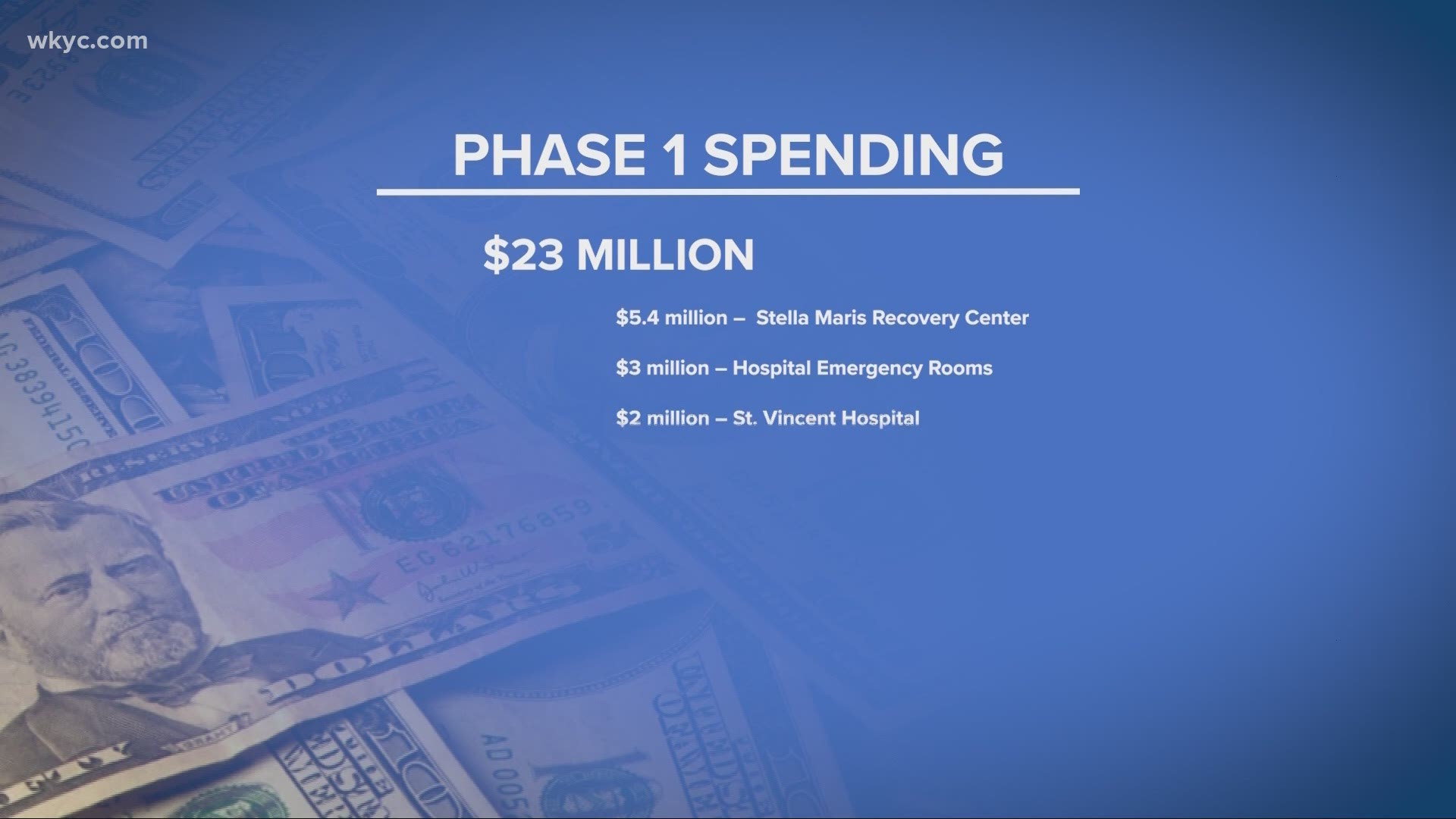 CLEVELAND — The Covid-19 pandemic has been overshadowing a long-standing public health crisis in Ohio and Cuyahoga County: opioid addiction.

“So, it was really a little scary to see it dry up, not just from a business perspective, but knowing that people weren't accessing care,” explained Daniel Lettenberger-Klein, CEO of Stella Maris, a detox and rehabilitation treatment center on the Cleveland’s West Side. “We are seeing people in long term stable recovery relapse and die as well.”

But more recently, Stella Maris has been hit with a wave of people seeking treatment.

“Our waitlist moved to above 200 clients for detox alone for the first time in the history of maintaining a waitlist,” Lettenberger-Klein said.

The number of statewide overdose deaths in May 2020 hit 560, up from 329 in May 2019. Deaths increased in June and July as well compared the same months the previous year, according to Ohio Harm Reduction, Granville-based nonprofit agency that distributes the overdose antidote naloxone and advocates treatment options for drug offenders.

Overdose deaths rose 20% in the first six months of 2020 compared the previous year, according to the agency.

Cuyahoga County reported 602 overdose deaths last year, up slightly from the previous year, according to the Cuyahoga County Medical Examiner’s Office. The majority of the overdoses involved the powerful opioid fentanyl, often mixed with other drugs. This is driving the surge more than prescription pills.

Cuyahoga County has been trying to combat the crisis on several fronts, including a legal one. It filed a lawsuit in 2017 against drug makers and distributors for misleading the public about the dangers of prescription opioids.

On the eve of the trial in 2019, the companies agreed to settle in a landmark deal worth $290 million divided between Cuyahoga and Summit, which also joined the lawsuit.

The county began distributing money in late 2019 and early 2020. About $23 million went to existing drug treatment programs, to expand recovery options and launch a program to divert low-level drug offenders from jail to treatment.

Here’s the latest breakdown of the money the county committed or spent in the first phase of distribution, some of it managed through the Alcohol, Drug Abuse and Mental Health Services Board of Cuyahoga County. (You can read the county’s unedited explanation of the distribution below this story.)

But the bulk of the settlement money – between $60 million and $70 million – is being set aside for the diversion center.

The program begins next month at the Oriana House, a corrections and treatment center in Cleveland.

The county is eyeing the former Cuyahoga County Juvenile Justice Center on East 22nd Street, between Cedar and Central avenues, for the program’s permanent home, which would offer intensive short-term treatment.

The old complex is the only site being actively considered, Brandy Carney, the county’s chief of special operations, told a council committee recently. Carney overseas the management of the opioid settlement money.

During the meeting, Carney said about $20 to $25 million is all that has not been spent or committed.

After delays related to the pandemic and requests from treatment providers – the county recently sought proposals for tapping the remaining money. But it comes with some strings. The county is looking to support services linked to the care people need leaving the diversion center, which is provides care for seven days or less.

But nonprofits can apply for some of the money to improve their facilities and add bed space, whether they are linked or not to the treatment center care. The county asked for proposals last month and closed the process last Wednesday.

“I personally believe that a larger portion of the opiate settlement money should have gone to agencies and organizations that have been helping battle the opioid crisis for years,” Jenn Lasky, executive director of the Edna House.

“And I feel like even if I don't take them directly from the diversion center, which we'd be happy to do,” she said. “We take anybody that comes to the front door or calls on the phone. When they come in here, we continue to take them. So that's the disheartening thing is I'm going to take those women from the diversion center anyway. But I'm not going to sign a piece of paper that said I will have a bed every single time. We are ready. We are waiting. We have the staff. You know, we just need some more beds, that's all.”

“It wasn’t that anybody was sitting on anything or dragging their feet,” he said. “We all knew that was going to take time. And once the money spent on other things, there's no money left. I mean, this is not a replenishing fund. So that was a big reason why the rest of the money was not yet spent. At the same time, we knew we were working on a diversion center. We knew it was going to be very expensive. We didn't have all the details and we weren't going to rush the diversion just to spend the money.”

He said the pandemic naturally slowed the process of distribution.

“We had a pandemic, which, you know, like it or not, that's been the focus of much of our attention over the last year,” he said.

Even before the county started taking applications from treatment providers, it received informal requests for funding totaling more than $150 million, Carney said. She also noted University Hospitals and Cleveland Clinic have recently approached the county with a request for tapping the opioid settlement money related to post-diversion center treatment.

Carney also said the county is considering hiring an investment advisor (paid for with a grant from the Cleveland Foundation) to set up an special investment fund with some of the money that could be used for future programs.

From the total amount of Opioid Funding received here are the projects funded, or discussed/in process to date

Diversion Center: $60 - $70 Million expected total for Diversion Project over 5 years for both Capital and Operational Costs. Not all of this has been approved by Council, but Administration expects this will be the total.

This amount is being held for a project still in the planning stages: $20 Million

Following are some of the recent updates on these projects: (Specific project detail on the initially project funded, at the time these agencies had their funding approved (1st Q 2020), is in the separate Excel spreadsheet).

dependency needs (as a result of either Mother positive tox screen or child at birth positive tox). The position is continuously posted and tested for

candidates. 8 Family Advocated currently in the 8-week training (as of

ADHAMS Board (10.1 Million for 3 Separate Projects)

24/7/365 days in Emergency Rooms and able to immediately offer services to individuals (and families) over 18 that come in for an overdose and have been revived. Metro Hospital initially had the program. 9 Coaches are currently in place and 3 more are being onboarded. These funds expanded the program to each of the other ERs in the County. Currently Cleveland Clinic is only program working through the option and

not in place at their ERs. In December 19 referrals were made. 7 declined services and the remaining 12 received support services.

Stella Marris: $5.4 Million. (All as of end of Nov 2020) Treatment bed expansion of 32 Additional residential treatment beds to serve approx. 260 additional clients (medical and treatment care, MAT and individual or group counseling). Purchasing new property in Tremont, have hired all nurses and in process of hiring support personnel. Finalizing with the Planning Dept for property. Funds also expanded Intensive Inpatient and Outpatient Programs.

Metro Hospital: $2.8/ Million. Expansion of Support Services and Staff for County Jail, additional of an Opioid Treatment Program/Staff and Social Worker for Community RV Intervention Services. Metro has been extensively planning the new program and working through additional licensing or other requirements (i.e., addition of Methadone treatment for Jail). Soon the contract will be herd by Council for Metro.

(Since this Initial $2.5 have spent a much larger amount on the Diversion Project). The total amount of overall Opioid Funding expected to use for Diversion Center is 60

Hire 4 New Prosecutors assigned to CFS due to Opioids Increase in Cases. 2 hired and Interviews for final 2 completed, Nov 2020.

k-12 Program Educational into schools for Drug Abuse Awareness. Schools and Districts have been selected. Working on content as of end of 2020. Due to COVID schools have been difficult to be able to work with additional programming and expansion.

Additional Specialty Dockets and hiring of clinical assessors. (0%). Due to COVID Courts have not been operating their normal dockets. Hope to begin this planning very soon.