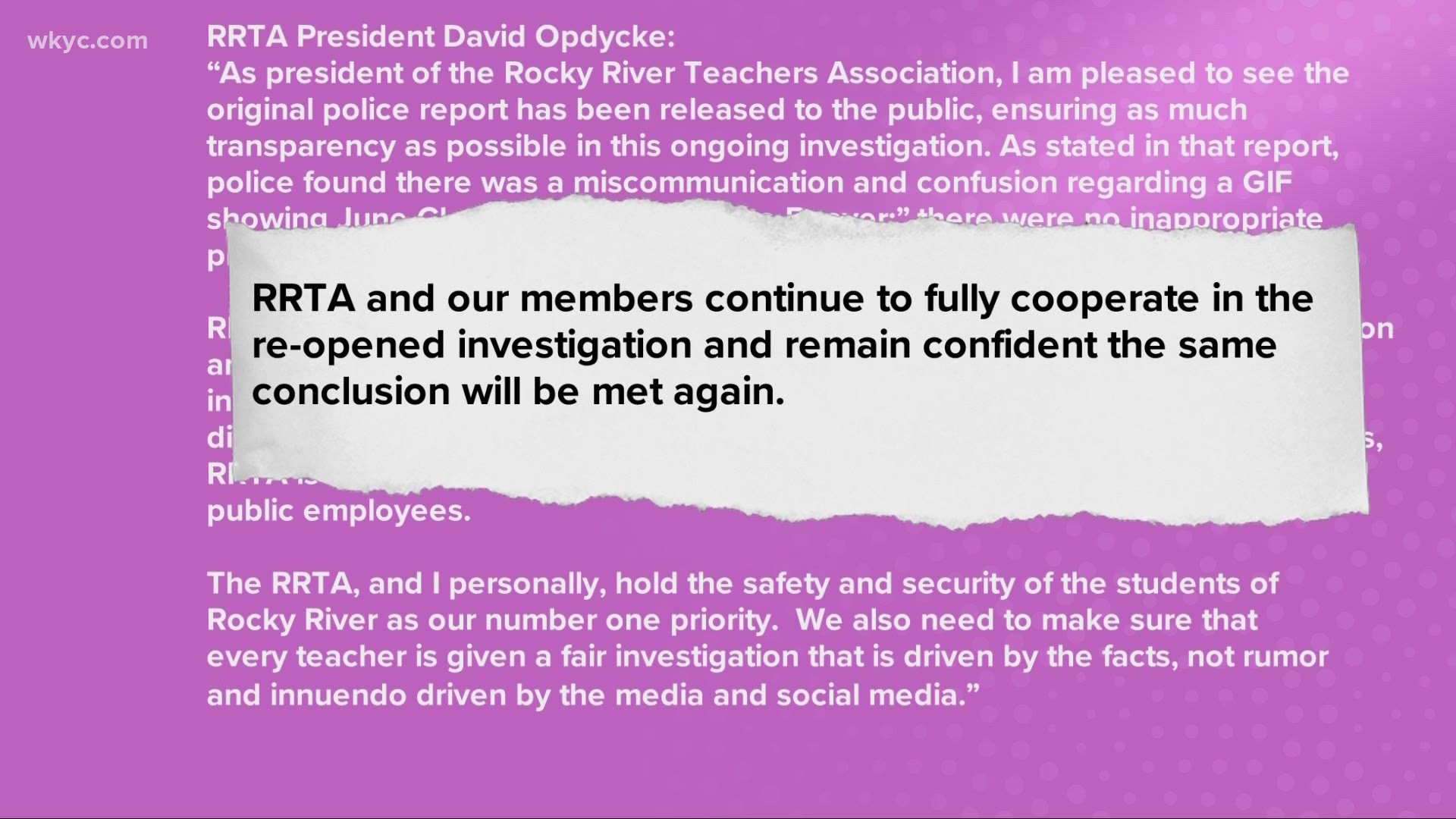 ROCKY RIVER, Ohio — Just days after declining to file charges in the case of alleged inappropriate conduct by high school teachers, the Rocky River Police Department has announced that it is reopening its criminal investigation.

In a statement released on Monday evening, the department says that over the weekend, investigators were made aware that previously undisclosed information may exist that indicates evidence of criminal activity.

"The safety of members of the Rocky River community is our highest priority. Students deserve an educational environment that is conducive to learning, free of harassment and intimidation," the department wrote in its release. "Rocky River Police will continue to investigate all leads and evidence concerning this case as it develops."

Police add that if anyone has any additional information concerning the investigation, they may contact investigators anonymously at (440) 895-2588.

While 3News works to confirm what the new information is, Rocky River mom April LaRow says she had to do something, so she’s organizing a rally Thursday before the special called school board meeting.

"I can't sleep soundly without doing something and letting the board know how I feel and how many others in the community feel," she said. "That conversation was just unacceptable."

Last week, Rocky River police leaders determined there was "insufficient evidence" to charge anyone involved in the incident. In addition, "No evidence of photos of students or inappropriate discussions about students were contained in the text message thread among the teachers."

In a 51-page report, the department explained the alleged inappropriate picture sent in the teachers' group text was not of a student, but was a "spoofed picture of June Cleaver with her dress pulled up exposing her vagina."

Amber Thomas, Crossroads Health Chief Clinical Officer of Youth Programming, says many parents are likely on edge thinking of the impact on their kid or others.

"Sometimes perception is reality, and sometimes we only have a little piece of what the reality is," she said. "Because we hear something that feels violating or threatening, we go into a protective mode."

LaRow says while the police complete their investigation, the trust between these teachers and local families is damaged.

"Men don't realize what it's like, and that we often are targeted from a younger age," she said. "It's getting better, but we have a ways to go."

In total, the Rocky River school district placed six staff members on leave after the allegations came to light. The administrative investigation is ongoing.

“As president of the Rocky River Teachers Association, I am pleased to see the original police report has been released to the public, ensuring as much transparency as possible in this ongoing investigation. As stated in that report, police found there was a miscommunication and confusion regarding a GIF showing June Cleaver from “Leave it to Beaver;” there were no inappropriate photos of any students and no grounds for criminal charges.

RRTA and our members continue to fully cooperate in the re-opened investigation and remain confident the same conclusion will be met again. The teachers involved are also looking forward to answering the allegations in the internal district investigation as that moves forward. Through both of these investigations, RRTA is committed to protecting the due process rights which are afforded to all public employees.

The RRTA, and I personally, hold the safety and security of the students of Rocky River as our number one priority.  We also need to make sure that every teacher is given a fair investigation that is driven by the facts, not rumor and innuendo driven by the media and social media.”

3News confirmed that on Thursday, April 1, the Rocky River School Board will hold a special meeting to discuss the investigation of charges or complaints against a public official or employee we believe to be the six teachers still under school investigation. That meeting will be held in executive session.

"I'm disgusted, I'm shocked, and as a father of a teenage daughter in this district, I'm angry," Superintendent Michael Shoaf said in a video statement last week. "What was stated by these staff members was not only inappropriate and unprofessional, it was offensive."

"If the current investigation concludes the staff members in question failed to act appropriately, then disciplainary action will be taken," said Assistant Superintendent Liz Anderson added in the video statement. Shoaf added that the district will respect the integrity of the investigation.

Editor's Note: The below story aired on March 29, 2021, prior to the decision to reopen the investigation by police