The 300-degree simulator could soon be permanent. 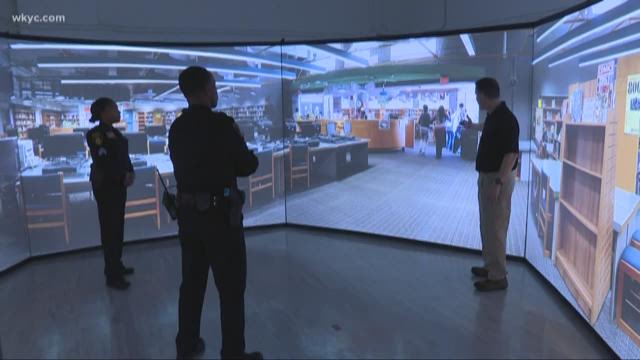 Nothing can prepare them for the latter experience, but technology is helping.

We're looking for systems that are more immersive," Cuyahoga Community College Police Chief Clayton Harris says. "That allows for an officer to really feel that they're engaged in that training 110 percent."

That's what's happening at Tri-C's Public Safety Training Center, where officers had a chance to try a 300-degree training simulator called Virtra, an installation that could become permanent very soon.

Officers in one scenario were pursuing active shooters in a school, surrounded by projector screens and a number of sensors to how officers respond in different scenarios. The situation changes based on their decisions.

This was my first time actually running this course," Tri-C Patrolman Antwan Daniels said. "I was sweating and my heart was pounding and everything just like I was when we were actually doing it live inside the building. "

The officers say the simulator feels more real than others they've tried, and the ability to debrief and play back their errors is even better than some live training sessions.

"I prefer this one over the actual course in the building," Daniels added.

Since it's all digital, departments can change the scenarios based on locations in their own cities, and an instructor can even adjust a number of parameters to see how an officer responds.

"The five panel [simulator] is exactly what we wanted," Chief Harris says. "Being able to have things happen all around you, you've got to have that in order to really feel that you're engaged in a situation."

"It really felt like this situation was happening right here on this campus," Officer Daniels said.