5,000 troops are being sent to Afghanistan to evacuate U.S. Diplomats and Afghan allies. 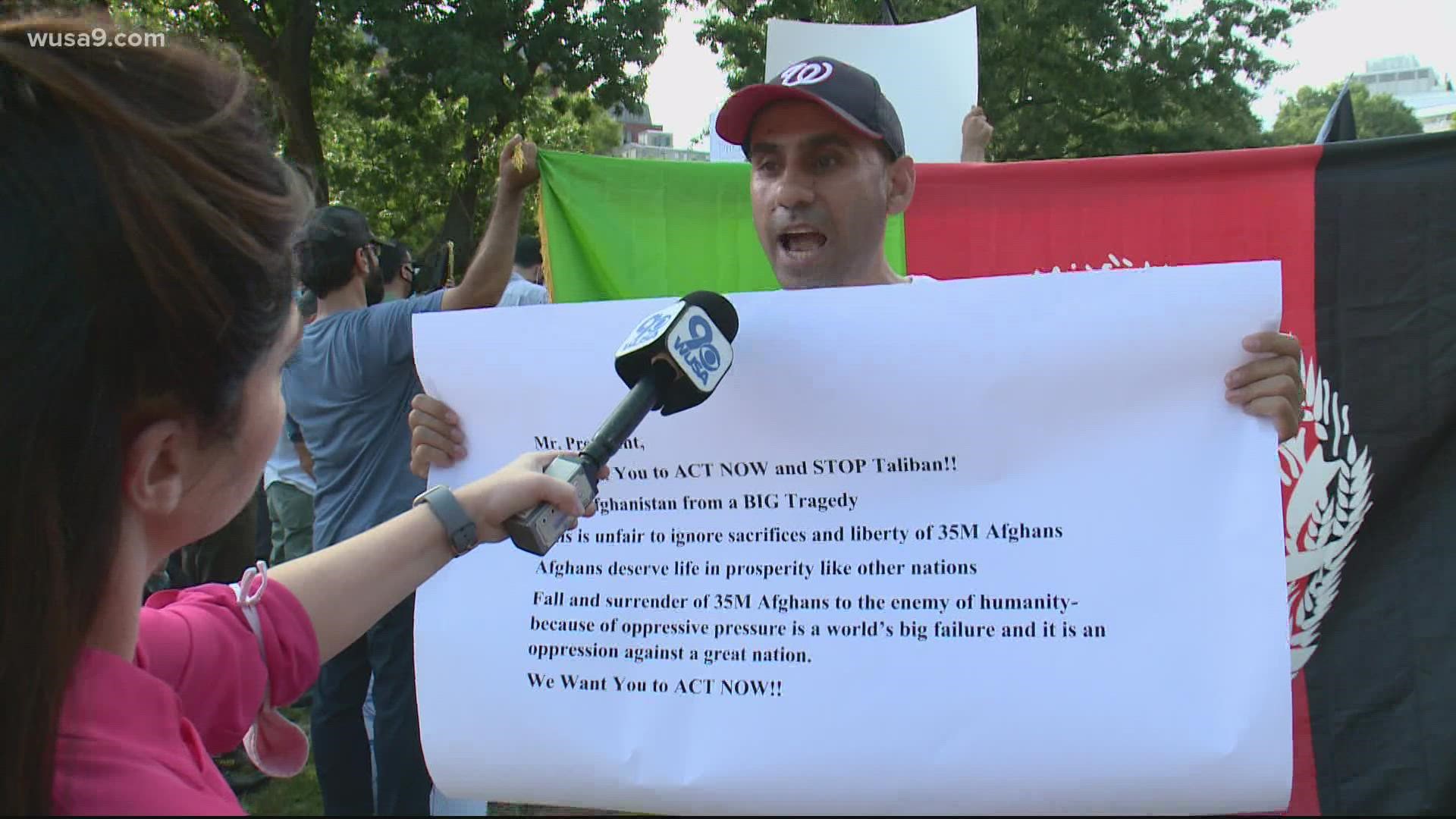 WASHINGTON — People with ties to Afghanistan are pleading to President Joe Biden to step in and help as hundreds of people protested Saturday afternoon outside the White House.

The protest was hours after President Biden authorized an additional 1,000 U.S. troops for deployment to Afghanistan, raising to roughly 5,000 the number of U.S. troops to evacuate U.S. diplomats and Afghan allies.

“We want Mr. President to hear and to act immediately, we want him to act now because Afghanistan is in a tragedy and we want him to stop the Taliban," Azahullah Zalmay said.

Zalmay lives in Northern Virginia but his home country is Afghanistan.

He said it's been hard to watch what's happening from 7,000 miles away.

“To be honest I am dying," Zalmay said. "Since last night I haven’t slept yet. I couldn’t sleep. It’s a tragedy for my people. I can’t sleep."

On Saturday, President Biden released a statement outlining plans to protect American values and interests as it ends its war in Afghanistan.

"Over our country’s 20 years at war in Afghanistan, America has sent its finest young men and women, invested nearly $1 trillion dollars, trained over 300,000 Afghan soldiers and police, equipped them with state-of-the-art military equipment, and maintained their air force as part of the longest war in U.S. history," the President's statement reads.

"One more year, or five more years, of U.S. military presence would not have made a difference if the Afghan military cannot or will not hold its own country. And an endless American presence in the middle of another country’s civil conflict was not acceptable to me," the President said in a statement.

President Joe Biden authorized on Saturday an additional 1,000 U.S. troops for deployment to Afghanistan, raising to roughly 5,000 the number of U.S. troops to ensure what Biden called an “orderly and safe drawdown” of American and allied personnel.

U.S. troops will also help in the evacuation of Afghans who worked with the military during the nearly two-decade war.

CBS News reported Saturday the Biden administration is preparing for the fall of Afghanistan’s capital city to the Taliban, which had rapidly seized multiple Afghan cities in a matter of days.

"I have my extended family back home and friends and family and there’s still not only my family there are 35 million people," Zalmay said. "It’s not only about me and my family it’s about my people. Those people deserve to live in prosperity as other nations.”

Afghan President Ashraf Ghani delivered a televised speech Saturday, his first public appearance since the recent Taliban gains, and pledged not to give up the “achievements” of the 20 years since the U.S. toppled the Taliban after the 9/11 attacks.

The Biden administration has asserted that Afghan security forces have tangible advantages over the insurgents, including a viable air force and superior numbers. The statement serves to highlight the fact that what the Afghan forces lack is motivation to fight in a circumstance where the Taliban seem to have decisive momentum.

Stephen Biddle, a professor of international and public affairs at Columbia University, said in an interview the announcement that U.S. troops were heading to Kabul to help pull out American diplomats and embassy staff likely made Afghan morale even worse.

In a statement Saturday, Biden didn’t explain the breakdown of the troops he said had been deployed. But a defense official said in a media statement that the president had approved Defense Secretary Lloyd Austin’s recommendation that the lead battalion of the 82nd Airborne Brigade Combat Team assist in the State Department’s drawdown.

Over the past several days I have been in close contact with my national security team to give them direction on how to protect our interests and values as we end our military mission in Afghanistan.