The federal charges against Derek Chauvin, Thomas Lane, J. Kueng and Tou Thao were revealed after indictments were unsealed Friday. 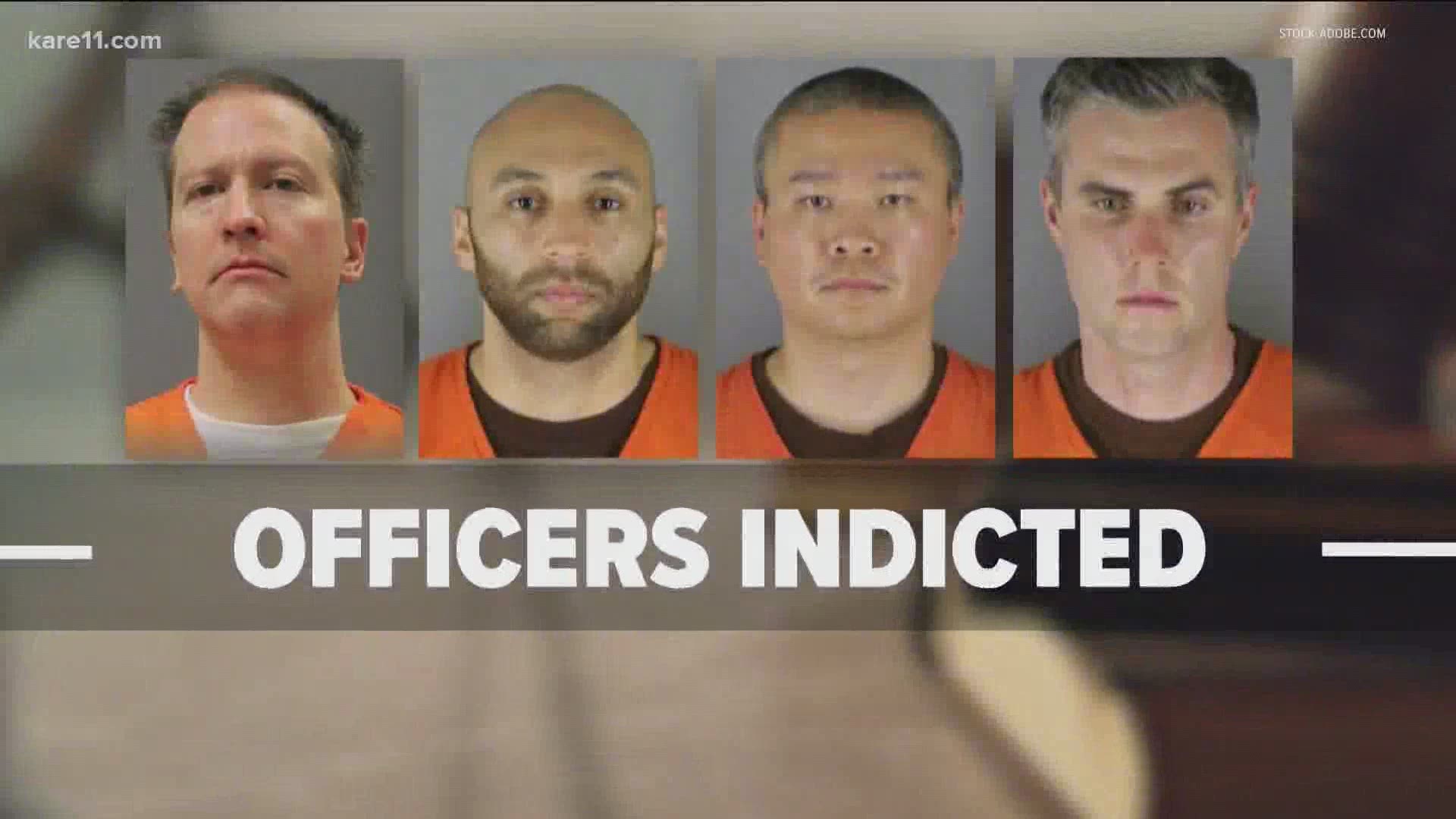 MINNEAPOLIS — A federal grand jury has indicted the four former Minneapolis police officers involved in George Floyd’s arrest and death, accusing them of violating the Black man’s constitutional rights as he was restrained face-down on the pavement and gasping for air, according to indictments unsealed Friday.

All four officers are charged for their failure to provide Floyd with medical care. Chauvin was also charged in a second indictment, stemming from the arrest and neck restraint of a 14-year-old boy in 2017. Court documents allege that Chauvin kneeled on the teen's neck and back even though he was handcuffed and not resisting, and struck him in the head multiple times with a flashlight.

Thomas Lane, Tou Thao and J. Kueng appeared via videoconference in U.S. District Court in Minneapolis. Chauvin was not part of the court appearance.

Chauvin was convicted last month on state charges of murder and manslaughter in Floyd’s death and is in Minnesota’s only maximum-security prison as he awaits sentencing.

RELATED: How long will Derek Chauvin go to prison for George Floyd's murder?

The other three former officers face a state trial in August, and they are free on bond. They were allowed to remain free after Friday's federal court appearance.

"The federal government has a responsibility to protect the civil rights of every American and to pursue justice to the fullest extent of federal law," Ellison asserted in a released statement. "Federal prosecution for the violation of George Floyd’s civil rights is entirely appropriate, particularly now that Derek Chauvin has been convicted of murder under Minnesota law for the death of George Floyd. The State is planning to present our case against the other three defendants to another jury in Hennepin County later this summer.”

Floyd, 46, died May 25 after Chauvin pinned him to the ground with a knee on his neck, even as Floyd, who was handcuffed, repeatedly said he couldn’t breathe. Kueng and Lane also helped restrain Floyd — state prosecutors have said Kueng knelt on Floyd’s back and Lane held down Floyd’s legs.

State prosecutors say Thao held back bystanders and kept them from intervening during the 9 1/2-minute restraint.

Chauvin’s attorney, Eric Nelson, argued during his murder trial that Chauvin acted reasonably in the situation and that Floyd died because of underlying health issues and drug use. He has filed a request for a new trial, citing many issues including the judge’s refusal to move the trial due to publicity.

Nelson had no comment on the federal charges Friday. Messages left with attorneys for two of the other officers were not immediately returned, and an attorney for the fourth officer was getting in an elevator and disconnected when reached by The Associated Press.

The National Action Network's Rev. Al Sharpton, who gave the eulogy at Floyd's funeral and has offered support to his family, was swift to react to the federal charges against the officers.

“A federal grand jury’s indictment of the four policemen involved in the George Floyd case and the separate indictment of Derek Chauvin on another case, shows we have a Justice Department that deals with police criminality and does not excuse it nor allow police to act as though as what they do is acceptable behavior in the line of duty," Sharpton said in a statement. "What we couldn’t get them to do in the case of Eric Garner, Michael Brown in Ferguson, and countless others, we are finally seeing them do today and this is a significant development for those of us who have been engaged in the struggle and police reform movement.”

To bring federal charges in deaths involving police, prosecutors must believe that an officer acted under the “color of law,” or government authority, and willfully deprived someone of their constitutional rights, including the right to be free from unreasonable seizures or the use of unreasonable force. That’s a high legal standard; an accident, bad judgment or simple negligence on the officer’s part isn’t enough to support federal charges.

Roy Austin, who prosecuted such cases as a former deputy assistant attorney general in the Department of Justice’s Civil Rights Division, said prosecutors have to prove that the officers knew what they were doing was wrong in that moment but did it anyway.

Conviction on a federal civil rights charge is punishable by up to life in prison or even the death penalty, but those stiff sentences are extremely rare and federal sentencing guidelines rely on complicated formulas that indicate the officers would get much less if convicted.

In Chauvin’s case, if the federal court uses second-degree murder as his underlying offense, he could face anywhere from 14 years to slightly more than 24 years, depending on whether he takes responsibility, said Mark Osler, a former federal prosecutor and professor at the University of St. Thomas School of Law.

Osler said the guidelines clearly state that any federal sentence would be served at the same time as a state sentence — the sentences wouldn’t stack. Chauvin is due to be sentenced on the state charges June 25.

Floyd’s arrest and death, which a bystander captured on cellphone video, sparked protests nationwide and widespread calls for an end to police brutality and racial inequities.